Em Allen is a Minneapolis based illustrator whose work is largely inspired by her lasting childhood love of adventure stories. Fantasy, fashion and fiction all combine to create illustrated cocktails of decadence, romance, and yearning. You can view her portfolio at allenem.com.

Em provided the illustration for the August 12th story “Someday We Will Embrace This Distance,” by Niyah Norris. 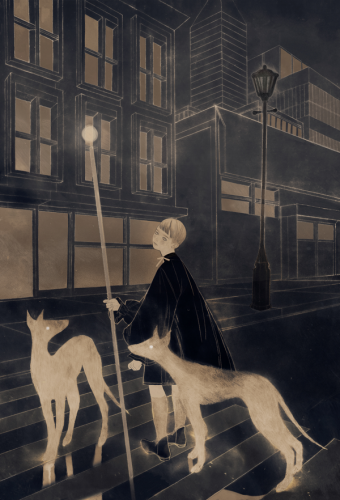 What led you to become an illustrator?

Drawing is something that I’ve always loved, even from a very young age. But it actually wasn’t until I was about 20 or so—half way through a graphic design degree—that I decided that I deserved to pursue something that I loved more than anything else. I’m so happy I did, and so so grateful that I had to opportunity and support needed to go after what makes me happiest.

Your work has a unique eerie atmosphere to it, and it conveys strong emotions through a limited color palette. How did you develop your style?

Fantasy and fiction have always been a huge inspiration to me, I love reading almost as much as I love drawing. A lot of that influence probably comes through in my work. My greatest hope is that my illustrations can be consumed like stories, even if they’re just fragments. Admittedly, I have a penchant for things that are either a bit sad or romantic, and keeping my palette limited is my way of putting the emotion of a piece at the forefront. I think this contributes a lot to the feeling of eeriness, as they lack the full saturation of the real world. I’m attracted to mysterious, charged imagery like that. I want people who see my work to feel like they’re being pulled into an important moment that is frozen in time.

Which artists inspire you most?

Oh man! There are too many to name them all. I like to ingest a steady flow of both contemporary and historical illustration—some of my favorites right now include Takato Yamamoto, Little Thunder, Edmund Dulac, Sara Kipin and Charles Robinson. 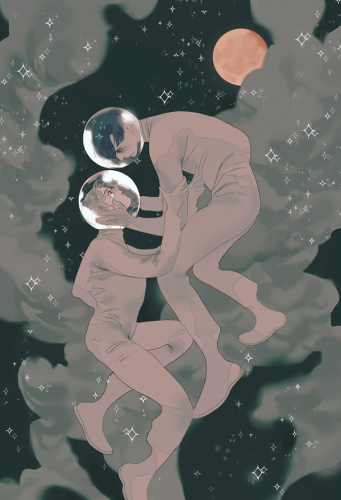 From the first idea to the final art, what is the process behind your work?

Not every piece begins the same way, but for personal work especially, I usually start with a phrase or a fragment of something I’ve written. I keep a running list of little blips of inspiration that come to me, and often they are the starting points for my illustrations. Once I have a direction in mind, I spend quite awhile working on the sketch. I am a firm believer in the idea that every problem can be resolved in the sketch phase, so it’s not uncommon for me to sketch things three to four times before it’s resolved enough that I’m ready to proceed to the final piece. This can be somewhat exhausting and time intensive, but it lets me put my full focus on the painting bit of my process later on. The incidental texture that you get from working traditionally is hard to replicate digitally, so I’ve been experimenting a lot with mixing traditional and digital media. Lately I’ve been kicking off my works with looser traditional paintings, and then finishing them digitally.

Tell me the story behind your "Interstellar Smoke" piece. How was the experience of exhibiting it?

“Interstellar Smoke” was a piece I created as part of an illustration exhibition that I show-ran for my college. The Exhibition was titled “One World Over” and was designed to be a showcase of works that interpreted the theme. The idea is that every work was a representation of a world, just “one over” from our own. It was both an exercise in exhibiting, and curating on my end. For that reason, it was extremely satisfying to see my piece come together with everyone else’s under the larger theme of the gallery. My illustration was one of those pieces that started with a title before it became an illustration. “Interstellar Smoke” features a couple sharing their last few breaths together in the wake of their worlds demise. I thought it would be sort of tragic for them to be separated in their last moments by the very things that had kept them alive until then. 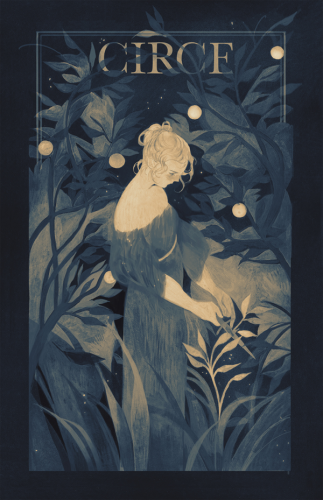 You made a beautiful fan cover for Madeline Miller's “Circe”. Which other speculative books you would like to illustrate?

Oh there are so many! If I could, I’d illustrate something for every good novel I’ve read. Currently though, I’m sitting on a work in progress fan-cover for NK Jemisin’s “The Fifth Season.” Something that I hope to return to and finish when I get the chance!

You're working on an upcoming art collection of fantasy romance, “(My Girlfriend) From Legends”. Can you tell us more about it?

Yes! “(My Girlfriend) From Legends” will be the first project by Bad Co. Press, which is a newly formed press collective by some college friends and myself. It’s a collaborative art anthology, that will feature 35 artists’ interpretations of the title. Each illustration tells the story of a legendary woman and the person who loves them. The content is centered around identity and representation at the heart of heroic and fantastic narratives. The premise was very much inspired by the themes we’ve seen in the amazing art of our peers, and we so dearly wanted to create an opportunity for artists to be apart of a larger collection of works. The Kickstarter for the anthology will launch on September 4th, and you can tune in to updates on Bad Co. Press’ twitter @badcopress.

Not right now! There are a few things I’ve got on the back burner, that I hope I can return to soon. Keep an eye out!

Like Loading...
© Copyright 2019 By: Dante Luiz
Art by: Em Allen
About Dante Luiz
Dante Luiz is an illustrator, art director for Strange Horizons, and occasional writer from southern Brazil. He is a two-time PRISM Awards finalist with work featured in anthologies by Toronto Comix and Margins Publishing, among others. Find him on Twitter or his website.
No comments yet. Be the first!