Jonathan Apilado graduated from San Jose State University's Animation/Illustration program. He served as an art lead on the short film titled "The Blue & the Beyond," which was accepted into festivals worldwide. Find his illustration at www.jonathanapilado.com. Jonathan provided art for this week's story, "At Whatever Are Their Moons" by Sunny Moraine. This interview was conducted by email in December 2015.

Heather McDougal: I must admit, I was drawn to the air of lively mystery that surrounds so many of the images I’ve seen in your portfolio. Because so many of them are based in your work in Visual Development, they are all about location and character—but such locations and characters! For example, Grandma and Lily’s Home for Magic Carpets and The Crystal Ball: are these full-fledged stories you’re working on, or are you illustrating/designing for someone else’s stories?

Jonathan Apilado: Most of my current portfolio is based on images I created in my senior year at San Jose State, so they were initiated by prompts given to me. The Magic Carpets came in the form of a prompt that stated, “magic carpet weaver.” I got to create the story as long as I followed the idea. And the Crystal Ball was based on the Grimm fairy tale “The Crystal Ball,” which I decided to set in mid to late Feudal Japan. These projects are completed for now, and I’ve switched my focus to a personal story I’m developing.

Heather McDougal: I see that you are a graduate of San Jose State’s Animation & Illustration program. What made you decide to go into this as a field, and how did that come about?

Jonathan Apilado: I remember the first drawings I was proud of were copies of Digimon cards I did in crayon. But what got me into animation were Miyazaki’s films, especially Spirited Away. There was an exciting sense of wonder to the film, and it took viewers through beautiful, immersive sets. Though, it wasn’t until my senior year of high school that I thought of pursuing a career in animation. I was advised to apply to San Jose State if I was interested in drawing and animation, and upon getting accepted, I visited the graduating senior class of 2009 that May. That’s when I realized that the Animation/Illustration program would help me fulfil my dream of working in the animation industry.

Heather McDougal: Could you explain what visual development is, for those of us who are uninitiated?

Jonathan Apilado: Visual development is a term mostly used in animated feature films, but also has different titles in the various sectors of the entertainment industry, such as being concept designer for video games. It broadly refers to creating rich worlds and characters that audiences can relate to. As such, that’s the mark I try to hit when I’m designing. More specifically, it’s about developing how a world will look, creating visual rules for this world, and what resides in that world. A team of artists tackles these problems and design environments and characters based on the parameters of the project. 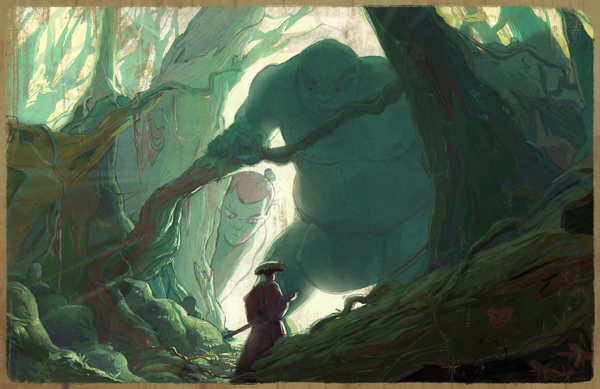 Heather McDougal: What are you working on right now?

Jonathan Apilado: I’m working on an ongoing story that I’m developing titled “The Adventures of Lucas & Pluto.” I view this project as a personal journey towards getting into the animation industry. I’m learning a lot about my process, and finding what I need to improve upon. It’s been a great experience so far. The support I’ve gotten for the project has been humbling, and I can’t wait to explore Lucas and Pluto’s world even more. Additionally, I picked up observational painting again using gouache. I’m finding some beautiful scenes around my hometown and relearning my way around.

Heather McDougal: What other artists inspire or interest you?

Jonathan Apilado: I have a huge list of artists that I admire, but I am especially fond of the artists who graduate from the film school GOBELINS. Their films are so whimsical and beautifully produced. One alum, Aymeric Kevin, is one of my heroes because of his versatile skill set and control over color. I hope to become an inspiration to other aspiring artists in the same way that he has inspired me.

Heather McDougal: What would you like to see more of in contemporary F/SF art?

Jonathan Apilado: From what I’ve observed, sometimes the messages in contemporary art get lost in its execution, and without knowing the artist's intent a viewer may lose interest. But when an artist derives an image/piece, or series, from a deep, personal experience, it has the ability to connect with others. It’s the honesty in their message that captivates audiences. One of my recent professors, Imin Yeh, showed me how the accessibility and abundant nature of print media can spread such messages in interactive and evocative ways.

Jonathan Apilado: My dream project would be about the team I get to work with and the impact our project would make. Another artist who I admire, Dice Tsutsumi, helped initiate a project titled Sketchtravel, which involved a large, red sketchbook that was passed around the world over a span of four years. When the sketchbook was completed, it was auctioned off and the money raised was donated to Room to Read, a non-profit charity that focuses on literacy and gender equality in education.

Dice Tsutsumi and another great artist, Ronnie del Carmen, took a trip to Sri Lanka and Cambodia to visit the libraries the Sketchtravel fund helped build. The way they talked about their experience and the positive impact the libraries had on the kids was so inspiring. My dream is just to leave a positive impression on the world even if it’s in a small way. I don’t know what form it will come in, but I just hope that others will benefit from it. 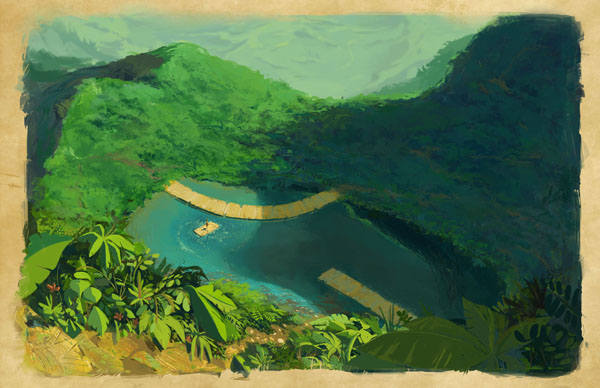 Heather McDougal: What's next for you?

Jonathan Apilado: I’m continuing to work on my portfolio, and also available for freelance work. Painting backgrounds for television has always been a dream of mine because of the paintings from Japanese animated films, and beautifully designed shows like Samurai Jack. But if not television backgrounds, I’d enjoy creating sets for animated feature film. That’s the aspect of my portfolio that I’m currently focusing on. Aside from projects, I’m enjoying this time off after graduation. It took some time to adjust to a different schedule, but I think I’m finally getting used to it. All that time I sacrificed family time for my school projects, is being made up and enjoyed. So, now I’m just looking for the next big chapter of my artistic career, and life. People that I’ve been talking to lately have said that this part in my life is temporary, but I think it’s an important step to something big.

Like Loading...
© Copyright 2015 Heather McDougal
About Heather McDougal
Heather McDougal is a writer, educator, and graphic designer who lives in Northern California.  She has been awarded a residency at the Djerassi Resident Artists Program, is an alumna of Viable Paradise and Writers of the Future, and is Art Director at Strange Horizons magazine. She's had stories published in Apex, Pseudopod, Writers of the Future, and a number of anthologies. Her novel, Songs for a Machine Age, was published by Hadley Rille Books in 2012.
No comments yet. Be the first!