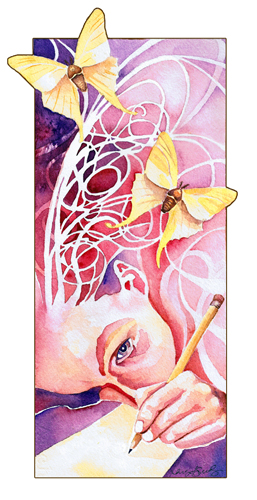 Ingrid Sundberg grew up in Maine on the small island of Mount Desert. Surrounded by the ocean and forest, she began her appreciation of the connections between nature, spirituality, and art. Later she attended the Massachusetts College of Art in Boston to study illustration. Over the years Ingrid has developed three styles of art. Her watercolors and mixed-media work are an exploration of the visual and intellectual connections between nature, science, spirituality, religion and philosophy. These “visual essays” should inspire the viewer to a deeper appreciation of the patterns and connections that surround us.

Ms. Sundberg’s children’s book work is inspired by the potential for all things to be alive and able to tell a story; thus flowers have eyes and monsters live in every swamp. Imagination will take a child on adventures through space and turn frogs into princes. Her work wishes to pay tribute to the imagination that allows children, despite all circumstances, to dream.

Ingrid Sundberg’s artwork has been published in a variety of magazines and books, including Sage Woman, The Mountain Astrologer, Strange Horizons, Redivider, and Ellipsis. Her work has been on exhibit throughout the country, in such venues as the NoHo Gallery in L.A., Foundry Art Center, Davistown Museum, Shaw Gallery, and Cafe Tu Tu Tango. Ingrid Sundberg presently resides in Southern California where she works in the film industry and as a freelance illustrator and writer.