Fiction
Size / / /
A Very Large Number of Moons
By: Kai Stewart
Art by: Youheum Son
1368 words
Listen to the podcast 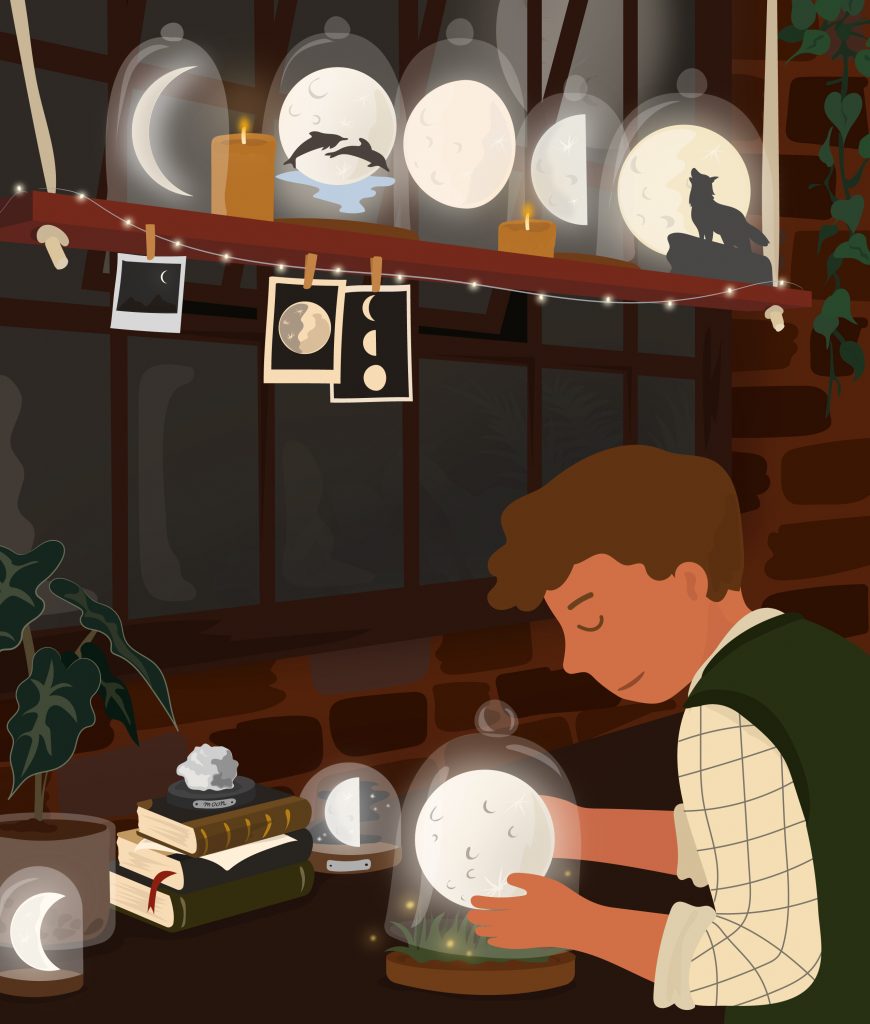 The harvest moon. The blue moon. The tropical moon. Flat moon—the moon you find in puddles. Strong moon—this is the moon of dogs, and I don’t know why they call it that. Dogs howl at a moon for not being the strong moon. Kite moon, that rides over your shoulder. Indigo moon—the plants that grow under this moon yield a deeper pigment than others, and can occasionally be heard to sing. Moon of new growth. Stew moon, one of the rare hearty moons. Most moons are wispy and elegant, but the stew moon can hold its own. Paper moon—not really a moon, but it satisfies the technical requirements. Werewolf moon, made famous in film; taco truck moon, under which a few tormented souls transform into taco trucks. Poppy moon with its silky petals. Stranger moon, which is not the moon you know, though you can’t quite figure how. Secret moon. That moon is a secret, but I know about it, and I’m telling you.

I am a collector. In another time and place, I might have collected insects or Italian romance novels, but we must all grow in the soil where we sprouted. I am cataloguing moons. I have at least one sample of each of the main phyla, and I have some very rare specimens, like the window moon, and the moon moon. That’s the moon only another moon can see.  No, I’m sorry, I can’t show you the moon moon.  I can show you the case it’s kept in, if you’d like to see that.

I found my first moon folded inside a library book. It was a lover’s moon, common and rather faded, but it got me started. Here’s the late moon—that moon isn’t around when you expect it to be. And the fast moon—like the secret moon, few people know about it, but it’s not a secret. It’s just hard to catch sight of. Here’s a conqueror’s moon.

I have a whole book just for inside moons—see? It starts with an attic moon, which is a favorite of ghosts and neglected orphans, and ends with a zoetropic moon, which is almost like the regular moon, except you have to push it yourself. The zoetropic moon could just as easily be an outside moon, but it rounds out the volume so nicely.

Here’s the historical moons, my area of particular focus.  Here’s the moon over Berlin on August 12, 1961, as the first brick was laid to divide the city. This is thought to be the moon that rose the night before the signing of the Magna Carta.  It’s the right phase, anyway, though it might be off by a month or two.  I’ve compiled a fairly extensive collection of the moons of the Nihonmatsu lantern festival, and my lunonomical history of Angola, Louisiana, is authoritative.  I had family there, back when.

This is the moon over Oscar Grant Plaza on Friday of Blue Week. I just happened to pick it up at an estate sale, but it led to my meeting President Naveen. I didn’t use this organizational scheme back then; when I was a young collector, I kept my moons out where I could see them. They were thick over every surface, and by the time President Naveen and her secret service came to see me, I had knocked the moon they wanted under a folio of refuted astronomy. You remember what President Naveen was like, always so serious; she looked over my collection while I shuffled frantically through it, and she said “Young man”—I was hardly young, but you remember what she was like—“Young man, this is a very large number of moons.” I was embarrassed, as you might imagine, but eventually we found the moon they wanted. I understand it helped to resolve certain investigations around the riots, and supported the subsequent legislation. After that I made organization and indexing a priority.

Did you come to see something specific? Most of my visitors are looking for historical moons, or folkloric ones; my old-man-in-the moon is popular, and I have a fine rabbit as well. Of course, the moon upon which Buzz Aldrin and Neil Armstrong landed is at the Air and Space Museum in Washington, but I have the first glimpse of the moon from the cupola of the International Space Station, as well as the moon shining on Apollo 8’s second stage in the first instant after separation. But what was it you wanted to see?

Why, yes, I have that moon. I got it from a collector specializing in nautical and aquatic moons. She said it washed up in the harbor after the storm. Let’s see, historical moons, of the sea, nocturnal, in communication, M-N-O— here it is, the moon on a pod of dolphins playing in the wreckage of IdlyAir Flight 287, as seen by her lone living passenger. A little water-damaged, but that gives it character. They found the passenger, you know; the passenger survived. A happy moment in a terrible business. How was it you heard about this moon? Not very widely known, though it is lovely.

I see.  I wondered, reading about the crash, what happened to you.

You’ve come a long way.  However did you find me?  No, I suppose there aren’t that many of us, but surely you haven’t been hunting us up, one by—I see.

I think I can understand why you’re here. Why you’d go to so much trouble for one moon, out of all the moons of your life. Why you’d come so far for a painful memory.  The storm, the accident, those were terrible, tragic. So many lost.  And then, after everything came undone, this serene, lovely moment; a breath of peace after the storm.

Well.  I’ll give you this moon; it’s rightly yours, anyway. Yours more than anyone’s in the world, except maybe the dolphins, and I’ll leave that between you and them.  But I think I’ll ask for something in trade.

Have you been to the memorial down at Taliska Bay?  I haven’t, but I remember it was in the newspaper. Give me the moon before the accident and I’ll send it down to Taliska Bay, down to the memorial, to the next of kin, the friends and family, all those who your shipmates would have wanted to share it with.  And, in return, you take this moon, and refer any questions of custody to the dolphins.

They’re nearly the same, yes.  Nearly, but not quite.  Notice the little differences.  The color, the shine, the pattern of clouds, the way you felt looking at it, or not looking at it.  Remember how you felt while it shone on the wings of the plane.  Remember how it helped light the cabin or didn’t, and remember how that changed what you and your flightmates did.  This will take only a moment.

Here you are.  You have somewhere to keep it?  They can be so fragile.  All right, then, get home, it’s late and I have my new specimen to prepare.