"If one could conclude as to the nature of the Creator from a study of creation, it would appear that God has an inordinate fondness for stars and beetles." 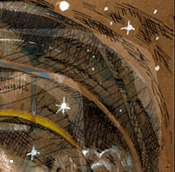 God cocked his thumb and aimed his index finger at the firmament.

Ka-pow! Pow! Pow! A line of three perfect glowing pinpoints of light appeared in the black void. He squeezed his eyes almost shut and let off a single shot. Ping! The pinprick of light at the far edge of the firmament, just where it touched the rim of the earth, glowed faintly red.

God got bored. Ratatatatatatatat! He peppered one corner of the sky with tiny specks of light clustered tight together. Each one glowed steadily. God lay down on his back and looked up at what he'd created. It was okay.

God's grandmother—she who was before the before, she who created dust out of nothing and the universe out of dust, sculptor of the clay of the world, creator and destroyer—was baking. She peered through the thickening mist that separated that which is from that which is becoming, and sighed.

"God," she called out. "Don't you think that's enough of those?" She had thought the night should remain in darkness. It was getting quite light in the firmament.

"All right. But only a few. Then I need you to come in and help with the animals."

Nanadeus rolled out a sheet of clay while she waited for God to come in out of the void. Now that there was fire, there was much to be done. Systems and cycles and chains of being to set in place. And the oceans, which had turned out to be a little tricky.

The waters had been gathered together, separate from the dry land, and that was fine. But they weren't moving. They just lay there, wet and placid and still. She'd gone out and shifted them back and forth, and they did move, but then they slowed down and lay still again, and that just wouldn't do. They had to keep moving, and she didn't have the time to go out and shake them twice a day. Besides, they were too heavy for her to be lifting all the time. Maybe she had made the deep too deep? Where was God? If he could help make some of the simpler creatures, she'd have time to deal with the oceans.

God lay on the earth, watching the twinkling stars, spraying random corners of the firmament with his outstretched finger, filling in the parts that seemed a little empty. Pow! Powpowpowpow! KAPOW! Ooops. He pursed his lips and drew in a breath, sucking a bit of light from that spot, then another, and another, until there were a few holes in the midst of the stars, blacker than the black of the void. 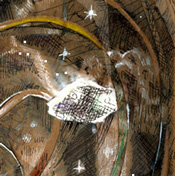 He sat up and examined a small muddy pebble clinging to his right knee. He put it on the palm of his hand and flicked it with his first finger, as hard as he could. The pebble shot far up into the firmament. God waited for it to fall down again, but it didn't. It wobbled a little, then just hung there. God made a POP! sound with his lips and the pebble began to glow with a bright white light. He grinned and reached for another pebble.

God dropped the pebble and went in. "What're you making? Can I help?"

Nanadeus smiled and rumpled his hair. "Yes, you can. You can be a big help right now. Watch what I do."

She pulled a tray of tiny brown ovals from the oven. "You need to decorate them while they're still soft," she said, putting one on the counter. She reached into one of the bins that lined the counter. LEGS, said one. WINGS. ANTENNAE.

She stretched the oval a little, added two hair-like feelers and six legs, daubed it with a bit of green pigment and added two multicolored wings. She held out her palm. The little bug was perfect in every detail, except it was just clay. Its tiny eyes were blank and featureless and it lay still.

"Pay attention," she said. "This is important." She picked up another soft, baked lump and added identical legs and antennae and wings, stretching it in the same way. "You have to make two of each. They can be different colors, if you want, but the very same creature. Okay, God?"

He nodded slowly, his eyes wide and curious. 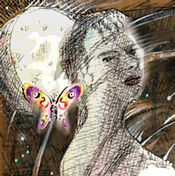 "Good. Now watch." She pinched a bit of bluish sparkling dust from a stone vat on the counter and sprinkled it over the dark shapes. "This is the fun part." She leaned over the clay figures and breathed on them gently. "Butterfly," she said.

The butterflies' wings quivered, then slowly beat together and out again. They flew onto the edge of the tray, to God's shoulder, and out into the void.

His grandmother scooped two clay dots from the tray. God stuck his tongue in the corner of his mouth and very carefully put five tiny legs into the warm clay. "Can I make them red?" he asked.

"Yes," laughed Nanadeus. "We'll need a lot of insects, and you may decorate them in any colors you want. Do try for symmetry, though, won't you dear?"

God nodded solemnly and added a sixth leg and two little wings. He painted the round bugs bright red, and after a moment's thought, added some tiny black spots. He held them out to Nanadeus.

"Very nice," she said. She sprinkled and blew onto them. "Ladybug," she said, and they flew away.

"What other kind of bugs can I make?" God asked.

"Use your imagination," she said. "Just don't get carried away. Keep them small."

"But—" she held up her finger in warning. "Remember. Only two of each kind. They will make more of themselves."

"Okay," said God. He made two red ants, and two tiny green aphids, and a pair of flies with fuzzy flocked legs. Nanadeus had just breathed onto the second fly when there was a shudder, and then silence.

"Oh, God, the seas have stopped," she sighed. "Will you be all right by yourself? I need to start them up. Again."

"I thought you might," Nanadeus smiled. "Have fun, but don't sprinkle them. We'll name them all when I come back." She patted him on the cheek and went out to deal with still waters.

God made two brown ants, and a different kind of aphid. Then he looked to make certain that his grandmother was gone, and opened all the other bins.

"Cool," said God. He took one of the larger mounds and outfitted it with fierce claws and long fuzzy antennae, painting it bright, bright green. Then he made three hundred dozen dozen more, each more fearsome and garish than the last. Horns, claws, stripes, spots, bristling legs and armored carapaces blazed in every iridescent hue.

Bugs everywhere. God wanted to make even more, but he had run out of counter space. Where could he move them to? Move . . . ? God looked at the vat of shimmering dust. Nanadeus had said to wait for her, but . . .

He took a handful of the dust and flung it over the trays of inanimate insects.

"Well," said Nanadeus from out in the void. "That was easier than I'd feared." Her voice was small and distant. "The rock you put up there really did the trick. Moon. Tides. Now why didn't I think of that ages ago. . . ."

She was getting closer. God could hear her sensible shoes tramping across the face of the earth.

He looked at the shimmering trays of bugs and blew, hard, over all of them at once. God whispered, as fast as he could: 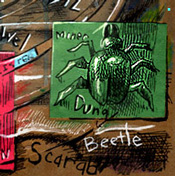 "God? How are you coming with those insects?" Nanadeus asked from just beyond.

God looked over his shoulder, then quickly back at the last pair of unmoving creatures on the tray. "DUNG beetle," he said with a grin. And it was so.

Then he leaned back and began to whistle as if he hadn't done anything at all. Creeping things covered every surface, legs and claws and pincers scuttling and skittering. God saw them and smiled. 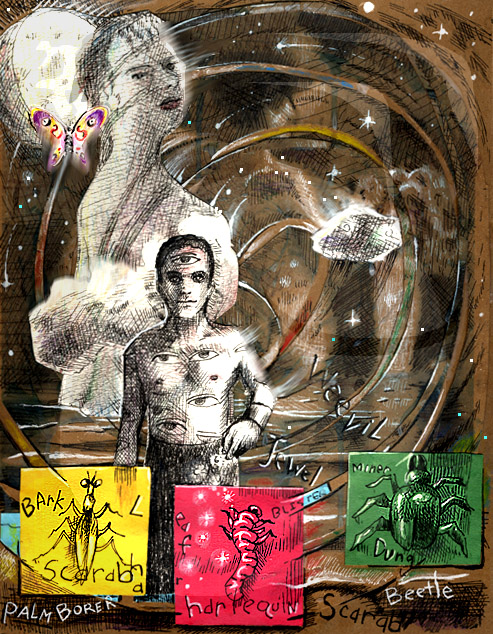 Turner G. Davis was born in 1971. He grew up in an artistic community outside Tucson, Arizona. In 1993 he graduated with a BFA in painting from the University of Arizona and went on to earn his Master's degree from the Maryland Institute College of Art. He is an exhibiting artist, married, with three children. You can see more of his work at his website. To contact him, send him mail at Turner@rivayaresgallery.com.