Enzo worked at the checkout in Tyler's Superstore. Tyler's had started life as a grocery but now offered a farmer's market, a bakery, a deli, a butcher shop, aisles of housewares, appliances, tableware, crockery, a pharmacy, a huge wine section, CDs and DVDs, photo reprints, small furniture, an optometrist, and a section for TVs and electronics. The ambient lights were low and soothing, the music bland, the employees, like Enzo, treading water. Enzo would be stuck at Tyler's until the place was driven out of business by some still more gargantuan sensorium that sold everything from new spouses to plastic surgery.

Until then he worked checkout.

"Where is the bottled water?" asked a harried woman trailing a crying toddler.

"Over there, ma'am, aisle six, under that big blue sign that says, Bottled Water."

When she turned her back, Enzo flipped her off.

Kwasniewski, the assistant manager, saw him, stalked over, and gave him a five minute tongue-lashing.

The store was filled with worn-out people 24/7. Like Enzo, they were spending money they didn't have. The global economy, the news told them, was booming. So why was everybody he knew working two jobs and living from one paycheck to the next? Why did everybody buy lottery tickets? Why did they try out for Become Megarich! and You Can't Be Too Thin! then watch those shows or a dozen like them nightly on various screens in astonishing lifelike splendor?

The magazines at the checkout counter were plastered with bright images of celebrities—beautiful people getting married, getting pregnant, getting divorced, getting arrested, going into rehab, getting out of rehab, having affairs, gaining weight and then losing it again. Everybody wanted to be a celebrity. If you weren't a celebrity, you might as well kill yourself.

At night he went home and surfed the web.

At home that night Enzo received an anonymous email headlined "Re-invent the world." No text—just a link.

The link took him to a black screen with the single word, Iteration, in purple. Enzo clicked on it, and was led through a series of images and instructions. On the screen came up a simulation of the city. Using keyboard commands or mouse clicks or touchscreen gestures, you could zoom in on a neighborhood, a street, a single building—home or business—or even an individual person. Or you could back off to see the state, the country, the continent, even the globe itself.

You could alter any element of the simulation. The function page read:

1) You may change one small thing per session.

Just a fancy MUD, with superior graphics. Still, it was interesting. Some major code writing had gone into this.

The next morning Enzo could barely keep his eyes open. He had stayed up too late. After two hours working checkout Enzo saw Kwasniewski coming for him. He was carrying a cup of coffee.

"Take a load off your feet, Enzo." Kwasniewski handed him the cup. "Ten minutes."

The coffee was just the way he liked it, sweet and hot. Astonished, Enzo sat in the break room and watched Kwasniewski work the register.

The sofa in the room did not reek of mildew like it usually did.

When he came back to the register, Kwasniewski moved down to spell Cindy in the next slot.

Enzo looked it up: iteration was a mathematical process whereby one arrives at the correct answer for an equation by substituting an approximate value for X—a guess, in effect—then running it through the equation. You then put the new answer in place of X and run it through again. Each repetition produces a more exact answer.

The next day Enzo's battered junker wasn't in the slot outside his apartment. Instead of a car key on his key ring he had a key to a bike lock that released a shining new streetbike with cargo carrier on back. Enzo rode the bike to work. It seemed like half of the employees arriving that morning came on bikes. The traffic in the streets was less. Little electric vans dropped people off at their work and stores.

Among the celebrity magazines, one bore the photo of a homely kid with big ears who scored the highest on the national merit scholarship test.

Enzo changed one thing every night. But the next morning he could never remember what he'd chosen. Every day he inspected the world and vaguely speculated about what had been altered. Small things.

But of course, everything was tied to everything else, and whatever you changed, changed things around it, connected to it, or even distant things, tied by a long thread of associations.

How many hits was the Iteration site getting? How many people, Enzo wondered, were entering their own changes into Iteration every day?

By the end of the week the store seemed much smaller, and less busy. The people who came in looked more rested. They knew Enzo by name. They joked about politics, but there was no edge of anger in their voices.

The woman from last week came in. Enzo was surprised to realize that he now knew her name—Mrs. Carmello. She looked a little dazed. "Where is the bottled water?" she asked.

Instinctively, Enzo looked over to Aisle 6. A big blue sign said Fruit Juice. "Bottled water?" He smiled. "Why would anyone bottle water, Mrs. C? You might as well try to sell air."

There are data sets in iteration that converge to single points, called attractive fixed points. Enzo wondered what point his series was converging toward? But it wasn't just his series. It was everybody's.

And what if somebody was making bad changes? Not everyone agreed what was bad or good. Bullies. Risk takers. Sociopaths. Did they have their own versions of Iteration? Were they at work in Enzo's world?

On the cover of the magazines was the team of volunteers who were working in the Paraguay economic miracle. Or Mrs. Shanks, a New York City librarian. Or some programming geek. He wasn't sure this was an improvement. Who wanted to read about librarians?

Infant mortality was at a historic low. People were calling it the best TV season since 1981. Psychiatrists were switching to internal medicine. The Buffalo Bills won the Super Bowl. Glaciers were returning to western Greenland.

The blizzard hit in early March and paralyzed the city. Enzo was riding the streetcar up Summer Street through a cloud of white when an electric van skidded through a stoplight and broadsided them. Enzo was thrown onto a thin elderly man with a green muffler wrapped around his neck. As Enzo helped the old man up, amid the shaken passengers, he saw that the woman driving the van had gotten out, looking dazed, her hand to her head. As he watched, a pickup truck followed the van through the stoplight and slid sideways into the van, pinning the woman between the vehicles. The jolt to the streetcar knocked the old man's head against a seat rail and drove Enzo to his knees.

The woman's screams tore through the swirling snow. People called 911 but the rescue vehicles were slow to respond. The old man, unconscious, bled profusely from a cut on his scalp. A number of passengers tried to help free the screaming woman from the van wreck while Enzo cradled the old man's head in his lap, holding the green muffler against his scalp to stop the bleeding. The air was bitterly cold and snow blew so thick outside the streetcar that Enzo could not see the building facades thirty feet away. Whose idea was this blizzard? The accident?

Was it anyone's idea? An unintended consequence?

The people on the streetcar and scattered passersby worked to free the woman. They kept her alive until the ambulance finally arrived. "She'll lose that leg," Enzo heard one of the EMTs, whose face was blanched white from the cold, say. The old man watched Enzo with patient eyes. When the medics finally came to take over from Enzo, the old man smiled weakly at him. "Thank you," he said.

If he should make a small mistake it would get corrected automatically, and might even speed up the approach to the final result.

No one on the streetcar, Enzo realized, could have prevented the accident. There was really nobody to blame. But the people had dealt with it, in small ways, as best they could. People, when they had to, behaved remarkably well.

Iterates may be categorized into stable and unstable sets depending on whether a neighborhood under iteration converges or diverges. Some move toward stability, others away.

Enzo told himself the changes he made were for everyone's good. And people would like them. Or at least they would act like they did.

As best he could tell, life got better. Some things still went wrong. For instance, one morning when Enzo awoke there was a woman in the bed beside him. She was very beautiful. The previous night had been glorious.

She slid out from beneath the covers. He touched her arm, and she faced him. "I have to go now," she said. Her eyes were dark brown, almost black.

"This is supposed to be an improvement," she said.

"Not for me." She gathered up her clothes and left.

Enzo did not have to be at work for two hours. He got out of bed and put on some clothes. He made a cup of coffee. It was hot and sweet. He sat at his kitchen table and wrote a poem.

Left her scent on my pillow.

There are no small things. 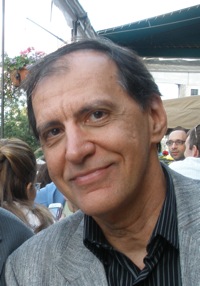