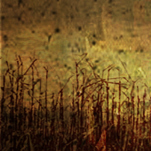 Dharma Shankar, Ph.D., is in his field, juggling ears of corn while the locusts approach. Contentment has settled in his flesh, with the corn, and there's a warm, orange-brown glow to the sky behind him, not yet swallowed by the coming swarm. An orange-brown glow in his belly, a birthing of hope.

The locusts have been approaching for three days, cutting across the eastern states without so much as a by-your-leave. Two weeks before harvest, they rose out of the ground, according to a number of confused reports—the locusts didn't leave much by way of witnesses. Entire towns were eaten before anyone outside knew something was up, nearly half a state before the Air Force affirmed a cloud of biomechs.

They traced the devastation back to what looked like an unfinished lot, the pavement riddled with pockmarks, like eggs that had burst through concrete flesh. Maybe it was a lab project gone awry. Maybe it was the Ussers, or the Norkees. Maybe even it was the OPEC cabal trying to get back in the game. Only crackpots mentioned the Leonids. Whatever it was, it was sudden, it was harsh, it was fast.

Dharma doesn't care. He dances his little jig in the field, massaging the air with runes, corn kaleidoscoping in his vision. He's doing his best not to think about the past, not to hope too much for the future; the present, the now, that's his, and anything more he can't say.

Martha is the one that cared. She never liked his retirement, anyway; the whole farm thing confused her, and he sensed some small, irrational part of her always suspecting that he was doing it just to spite her. She encouraged his tinkering, carrying on the projects his old company no longer wanted him to work on, but she always wanted to know why he couldn't just do it in a garage somewhere in town. Actually tending the farm was completely beyond her.

She left him, or he left her. It was all the same thing, in the end. He had to stay with the farm, while she had to stay with their son; who knows which of the two of them is safer? Dharma hopes he's wrong, hopes that the world isn't ending. Wonders whether his one act of defiance will matter.

The locusts will be greeting him soon; they've missed his farm five times by just a few miles, but now he's the only bite left if they don't deviate further than fifteen percent from his models.

He's been analyzing their movements for forty hours, laying their trail over GIS data, plotting farms and roads, waterways and air patterns. They are nothing if not methodical, unless it is unpredictable. They hit everything, no path is wasted, but it's a chaotic pattern—no measurement can say where they'll hit next. In the specific. Generalities, probabilities, those can be reasoned. How long a place has left to live.

In their tiny chitinous skulls, or at least in the bounds of the swarm, roam the full mysteries of the universe: fluid dynamics applied, Shiva made real.

He half expects to see the god appear, miragelike, under the clickety blanket.

Dharma juggles the corn and dances, and tries to imagine what it must be like to be so perfect, the essence of a cog in a wheel; progress. The warmth in his belly begins to burn, spreads with the pulsing of his blood, quickens his feet and arms.

He's tried before—to be a cog. He really tried, and they bought him out. They took his children, half-formed, and that was that. Maybe he could have tried harder, maybe she wouldn't have left him. Maybe the world wouldn't be ending. There are always maybes, and sureties, and they all come out and dance the night away when endings and beginnings come. 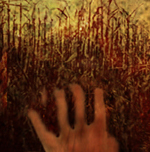 Now he'll be a cog. His bits and their bits, all mixed together.

And if he's planned things just right—if he's read the signs—if what he tasted was real—if Shiva is coming, next will be Brahma—his bits eating their bits, becoming a swarm, becoming new consciousness, birth from death—the constant, change.

If he isn't just crazy, or suicidal. There is that tiny piece of him that's afraid, but it just adds a bit of fervor to the dance. There is that tiny piece of him that welcomes ends, and that worries him more than death. Change—too much change has come for it to stop, too much pain; he hopes to push the wheel 'round again. The life birthed in his flesh will be consumed and will in turn consume.

Dharma is gone, and the bugs travel on, but his patch of farm stands. And maybe—just maybe, if it's not an odd glint of sun in the country of darkness—maybe one of the bugs just birthed something new. 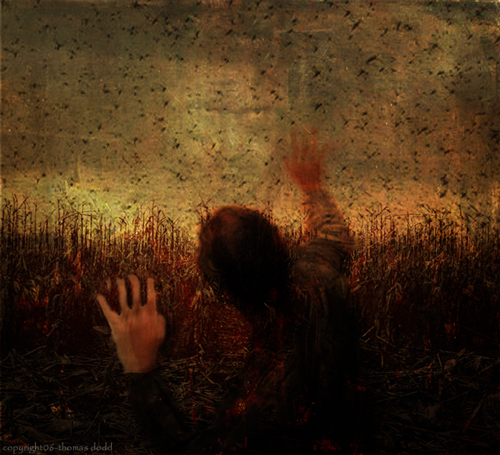 The story "Pockmarked Cement" (but not the art), by Kaolin Fire, is licensed under a Creative Commons Attribution 3.0 United States License.

If you redistribute this story, please include a link to
http://strangehorizons.com/2006/20061106/cement-f.shtml

Thomas Dodd is a master of the art of "photo-manipulation". Through layering, digital painting and compositing, he crafts portraits that look like master paintings, yet are still in the realm of photography. More information on the artist is available at http://thomasdodd.com.