Normally, by the first faint light of false dawn, we'd all be back in our separate little fox dens. But it's mating season. The air is thick with it, the frenzy of it, the reckless danger of it. The close call with the trap has cleared my head, and I want to be out of here. But I can't shake my mate. I snap at him, growl him off. He has a scratch on his snout where I cuffed him. He hangs back out of reach, but when I turn and trot off, he keeps following.

I lead him across the open field, partly to clean the mud from my paws in the new spring grass and partly to lead him past the electric eye that triggers the camera. I hope there's still some shots left and that the click will scare him off. If I have to, I'll just change, but I'd rather not. Before, he hadn't, of course, paid much attention to the sound of the camera, but now it startles him, gives him pause. I dash across the clearing and into the brush and find the tree.

I wait, but he doesn't come after me. I make sure there's enough space around me, and change. No pain like in the movies, just four vulnerable minutes like being very, very drunk. And then, peltless, cold.

I stood up and looked back across the clearing, and he was gone. I pulled the black backpack down from the fir branch where I'd hidden it and got dressed. I gathered and packed up my cameras, motion sensors, and batteries. Some damn rodent'd chewed on one of my wires again.

I hiked out and went home. I shopped for groceries. I returned my library books. I did laundry. It was April, so I did my taxes.

"We should get married," he repeated.

It was ten minutes to one in the afternoon, and we were in his kitchen, he in sweatpants, I in his robe, waiting for the pizza kid. We were exhausted and rank, and I was headachy from the morning spent upstairs in his queen-size. I didn't want any conversation, especially not that conversation, because I wanted one more go-round before he went to work at three. (Who'd have thought that cops work rotating shifts like factory workers?)

But he was not going to be put off this time. He raised his coffee to his mouth, and even though his eyes disappeared behind the mug, they demanded an answer.

"Yeah, you know. You invite everybody you know, you go on a honeymoon, you have a couple of kids, you fight about money. Married."

My hopes were vanishing in the tone of his voice. This was not the first time he'd mentioned kids, not the first opportunity I'd had to tell him that I'd precluded that possibility surgically some time ago. I let the moment pass once again.

The bell rang and he went to it, came back with the pizza, and sat across from me. I was ravenous and he let me get through two slices before he insisted, "Well?"

"What's wrong with the way things are?" I asked, lifting my eyebrows toward the room upstairs, still hoping.

"Okay. How are things? You come, you go. You show up, we fuck like bunnies, then you're off again, out in the middle of God-knows-where. And I'm supposed to just wait until you show up again? If you show up again."

Clinging to a thin hope, I teased, "Oh, city boy, have you ever seen bunnies--"

"I'm not saying give it up." He ate his crust. "And, give what up? It's not as if you're trying to make a career out of it or anything. You take ten thousand pictures that nobody ever sees--"

"Is that what this is about -- money?" I said, trying to sidetrack him from the original question. And from the other questions that he was getting too close to.

Of course not. I had money. A small income, a small house, a legacy from my grandmother.

He wasn't going to be sidetracked. "I'm not saying give it up. But it is dangerous. You know that."

My grandmother again, who is still officially a missing person, but who really just went out one day and decided not to come back. No note, nothing. I don't forgive her for that. I was fifteen. She could have waited for me. Or taken me with her.

"You knew what I did when we met," I said. We'd met at a photography class. I ran with it; he decided to play softball instead.

"Not exactly. You said hiking and backpacking. Endangered species, things like that. I thought you did something environmental . . . but, well, what do you do out there, besides taking pictures? And, yeah, maybe that's what this is about-- What are you doing with your life?"

I didn't have a ready answer for that one, but he didn't wait for one.

"And," he pointed out, "you didn't say alone, and for days at a time. It's making me crazy. You don't know what's out there. We find a lot of bodies in the woods. When we have a missing, that's where we start looking -- the woods. And what about that guy that was attacked by that bear last summer? You could break your ankle. You could fall off a cliff. You're out there incognito. How would I even know if something happened? I got you the cell phone, but the batteries went dead, it got wet, whatever. . . ."

He meant incommunicado. "You're out there every day with armed perps. I worry too."

He leaned his chair back, as if trying to gain some distance, some perspective, watching me so intently with his dark, dark eyes that his brows met in the middle. I leaned to one side, framing his head in the sink window. I glanced at my camera case on the counter. He looked at it, then back at me, then leaned over and slid it out of my reach. "No more pictures!" he said, annoyed. "I'm going to get skin cancer from that damn flash."

He looked at me a moment longer, and when I didn't say anything, he got up. "I have to get ready for work," he said, meaning that I didn't. Meaning what was I doing with my life.

"We have to decide," he said. Meaning me.

The girl at the photo shop was a perky puppy behind the black lipstick and the ugly haircut. When she came back with my pictures, one of the envelopes had a yellow sticky-note with a name and phone number on it. She peeled it off and handed it to me. "Rob is one of our developers. He says he knows somebody who might be interested in some of your pictures. He does nature stuff, too, and he says you've got some really interesting stuff. Anyway, that's his number."

"He went through my pictures?"

"They go through everything. 'Professional Developing,' right?" She hesitated a moment, then confided, "They go through everything looking for the X-rated stuff. You'd be surprised what comes through here. They make copies for themselves, and they know who it is too, because your name's on the order. If you're going to do that, at least get a digital and print it up yourself. It's disgusting. $32.47."

My pictures weren't X-rated. I wouldn't agree to that, which is one of the things Kenny has against my photography. But they were private. And I can't have anybody sticking his nose in. "This Rob," I said. "Did he make copies of my pictures?"

Her eyes got that look that deer get at the first faint whiff of cigarette smoke or gun oil.

I handed her two twenties, thinking, I'll gouge his eyes out if he did.

The moon is about three-quarters full and the April nights are beginning to stay warm. It's nearing the end of the season, but there should be a few days left. I put my clothes in the stuff sack. No cameras this time. Now I have to figure out how to get the money for a digital and the special printer.

I watch the light fading from the sky, and when I can see the first stars, I drop to all fours and say my grandmother's prayers.

I've never had a soft spot for losers. When I was young, I worked my way through most of the endangered mammals list, doing my duty, and so I could say I was a better person than she was. Know yourself, she used to say. And, Follow your bliss. I thought they were her own original bits. I thought they were philosophical and high-minded. Now, I mostly run with red fox, coming back to all that chutzpah and cunning and smug vanity, to the only non-rodent mammal successfully defying humankind. I don't know what she chose.

I cut across the open field. I can hear the voles in the grass, fat and careless on the new spring growth. The hunting will be good later, but first things first. I enter the scrub and find his first marker, very fresh. I yip, just in case my scent doesn't carry. There's enough wind to confuse both scent and sound. Faintly, a dog barks, but I can tell from the first sound of it that she is confined. I continue moving toward the den at the center of his territory and yip again. This time, from far off, he answers, several times with excitement, each one getting closer, and I call, guiding him.

He creeps toward me low to the ground, with a whiny growl of misery and accusation. Then, all is forgiven as he prances from side to side with happiness. He lunges at me and I run, letting him chase me, leading him down into the bracken, where I turn and face him, beginning the sidestepping dance. He mirrors my movements, but he watches me with his head cocked, confused and uncertain, as if listening to a song he can't quite name. I lift my tail, reminding him, but my scent is no longer strong or specific enough. It's been warm and I've been away. . . .

So we hunt. He takes the lead, and I follow along, letting him make most of the kills. And when we've had our fill of the voles and a bobwhite nest, we settle down on a rise, and I just look at him, colorless in the moonlight, his pale eyes bright coins, his ears edged with silver. They say that criminals like to take pictures or keep a souvenir. This isn't a crime, of course, but yeah, I understand that.

I think, I try to think, about Kenny. About his wanting kids, about money and taxes and laundry and groceries, about sitting through softball games, about how there's no way I can imagine trusting him with this. About how long I might keep getting away with it. About giving it up.

I jump up and take off. We go up to the edge of the city and run along the backyard fences, tormenting the dogs. 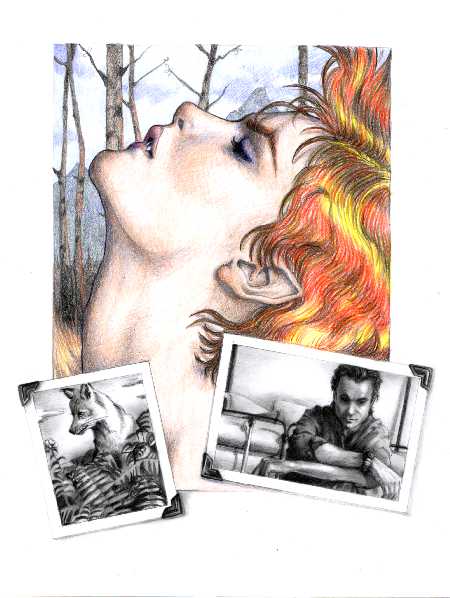 K. J. Kirby was born in a small upstate New York town midway through the last century. She has worked as a parent, teacher, book salesman, warehouseman, and construction electrician. She has seen the inside workings of hospitals, supermarkets, power houses, and robotic assembly plants. Among other things. To contact her, send her email at kkkidder@commkey.net.