In the great northern kingdoms, the demon dwelled on a mountainside, underneath a prison of thornbushes that pricked and scratched whenever it dared to move. The sword of the heroine Grambion rested nearby, its pommel all that remained. The rest, 'twas said, had been devoured by the demon's blood.

It was said in the town at the foot of the mountain that the demon granted wishes, but that such a venture was perilous, for the demon fervently desired the destruction of the kingdom that had birthed the woman who defeated it.

One day, a simple man braved the climb up the peak to the blackened, twisted thicket where the demon dwelled.

"What would you have of me?" asked the demon.

"My father is dead, and his smithy lies empty and cold. I have not the ability nor the will to keep it from my grasping uncle's hands. I ask for strength of arm and skill to wield a hammer, that I might feed my family and keep them safe."

"This I will grant," said the demon, "if you but pluck the roots from the thorns around my hand, for my muscles ache and my bones are sorely tried by the strain of my position."

"Then I shall find another way," said the blacksmith, "for I know you mean our kingdom ill."

"Well then," said the demon. "My price then is this: when it comes to pass that someone asks you of the source of your wealth and your cunning artifice, you may answer however you like, but once and only once, you must answer truthfully, and tell them of our bargain."

The blacksmith thought but could see no trap in this, so he agreed. And the power flowed through his arms like a river of iron. He grew to be a mighty armorer, famed throughout the kingdom. It came to pass that the Queen's advisor heard of the blacksmith's skill and came to commission a piece. She asked how he grew so skilled, and bound by his promise, the blacksmith answered true.

The following day, the advisor climbed the mountain and found the demon crouched, as ever, beneath its thorns. "What would you have of me?" asked the demon.

"The Queen is swayed this way and that by merchants and princes who desire nothing but to bleed our nation dry," the advisor answered. "I could guide her true, but I am blunt and charmless. Grant me felicity of wordsmithery and a honeyed tongue, that I might use my cunning to best effect."

"This I will do," said the demon, "if you but nudge the pommel of Grambion's sword aside, for the gleam of the sun in its jewels pains my eyes in the mornings."

"I am no bumpkin," sneered the advisor. "The holy sword is the lock upon your chains, as well you know. Find a fool to release you, for it will not be I."

"Well, then," said the demon. "Instead I ask only this: that you tell one other person of our bargain before your death."

"The time and place of my choosing?"

The advisor, confident in her wisdom, agreed, and suddenly her tongue was as limber as an eel. She went forth and grew mighty in power behind the throne, and the kingdom prospered as she had foreseen. At last, when she grew gray-headed, she bethought herself of her promise and called forth the simplest, most honest, and most earnestly good-hearted soul she knew: a simple harper who lived in the court, a poet and dreamer who had never wished harm upon even a wasp that stung his hand. She brought him to her chambers under pretense of love—for he was comely and a favorite of the courtly ladies—but whispered the tale in his ear instead.

Amazed and aghast, the harper dithered for a time, uncertain. At last, he resolved that he must see the truth of the legend for himself. He traveled to the distant village—now a prosperous town, with the trade brought by its famous blacksmith, whose sons worked the forges in these days—and up the mountain to the spot where the demon lay trapped.

"What would you have of me?" asked the demon.

"I would see the world at peace, and all men and women know nothing but love and happiness all the days of their lives."

"This," said the demon, "is not within my power. Would that it were, for the aid I can grant is my only source of entertainment. It is a dull life, here on the mountainside."

"Then I will play a song for you," said the harper promptly. He plucked his harp and sang a lively ditty of love lost and love regained.

"A fine song," the demon admitted when it was over, "but it seems light and frivolous. Do you never hunger for more?"

"Would that I had the gift," the harper sighed. "My voice is well enough, and my playing, and my face, but when I try to speak what is in my heart, it comes out mangled and strained. It is hard to speak of anything true in this world, where so much is duplicity and falsehood."

The harper brightened. "Yes, of course! Demon, can you grant me the ability to speak truly? To reveal what is so, such that all who hear me know and understand the truth of the world?"

"And what price must I pay?" asked the harper, nervous of the demon's smile.

"Nothing," said the demon. "Nothing at all."

And so the truth came into the harper, and he knew how to make it ring from the hills and echo from the very battlements of the castle in the capital. He had thought the truth beautiful before. He grew quiet before he went down from the mountain.

In the great northern wastes, a demon dwells on a mountainside beside a wrack of thornbushes.

The songs say it grants wishes. 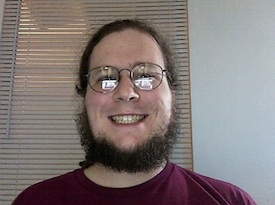