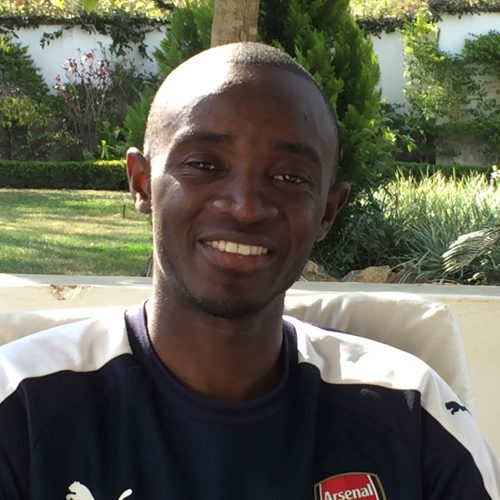 The lake was calm that day, perfect for hanging out by the beach. Not that it mattered. There was nobody within the group on the beach who was thinking of going for a swim. All eyes were on the sky, waiting, hoping the latest satellite tracking system was as good as the United States government said it was.

Colonel James Banda and his troops had been at the site for nearly six hours. He had never seen a spaceship personally, and he was sure his men had not either. But these Americans have, the colonel thought, looking to his right. The two agents from the CIA were engaged in serious conversation with the local embassy’s security chief, two scientists from NASA who had flown in that morning, and Lieutenant John Phiri of the Malawi Defence Force. The two scientists look out of place in their lab coats, surrounded by scores of army men.

“What’s the word, Lieutenant?” Colonel Banda asked even before his junior opened his mouth.

From "VIII", by Andrew Dakalira, in the second in the AfroSF series of anthologies, AfroSFv2

Andrew Dakalira looks and sounds like a student. He’s skinny, self-deprecating, and chuckles a lot. His Ts are so crisp they sound like clinking teacups, and his S’s hiss.

He gently tells you tales of nights clubbing and drinking til 5.00am and driving back from Blantyre so that his parents don’t know he’s gone. Last year a friend driving him home crashed the car.

To me, that all sounds rather innocent, but Muthi Nhlema tells me that by Malawian standards, it counts as wild behaviour.

Andrew: “I was born in Lilongwe. My mom is a retired accountant, Dad is a retired teacher. He taught mostly mathematics but while I was growing up he was the head teacher. As a matter of fact I had to go to his school. I guess it had its perks? But it wasn’t really pretty because you were in the spotlight most of the time. The grades weren’t really bad, so nobody complained on that front, it was the misbehaving front that was pretty weird.

“It wasn’t really big stuff, climbing fences, playing tag or playing hooky sometimes. Drugs? No, no, no. Punching a teacher? No, no. Alcohol was mostly after secondary school.”

He also seems to be completely dedicated to his writing, setting time aside every weekend to write. He’s certainly part of Story Club and other Malawian efforts to develop local writers. He wasn’t part of Imagine Africa 500 – but Ivor Hartmann selected his novella VIII for the second volume of Afro SF – a pretty big deal.

He didn’t plan on becoming an SF writer, though he frequently writes about the supernatural.

Andrew: “I really didn’t plan on it. Like I think VIII in AfroSFv2 was maybe the third science fiction piece I wrote. It wasn’t really a conscious decision.

“I don’t really see myself as a science fiction writer per se because some of the other stories I’ve written are not science fiction. Some of them have to do with witchcraft.

“I was a reader first. Even as a seven or eight year old I wanted to sit down to read. I really liked Katherine Paterson’s Bridge to Terabithia, about a boy who lived on a farm and he got a new neighbour, a girl who just moved, and they created their own imaginary kingdom. Because of that, as I grew up, I started writing stories of my own mostly in secondary school.

“I used to get my books from the National Library in Lilongwe, or sometimes my dad’s friends sent them from the States. And as I got into my twenties, I read all of Harry Potter, every Stephen King, and a lot of James Patterson. I’m actually a fan of John Grisham. And, of course, there’s Dean Koontz… As time went by I read some more and I realized what I liked. For example, I liked Stephen King but I started reading War and Peace and couldn’t finish it.

“The one disadvantage around here is that you don’t find many novels by African writers, especially recent ones, and it is even harder to find African science fiction. No Tade Thompson, no Nnedi Okorafor, it’s even hard to find a book by, say, Chibundu Onuzo (mainstream author of The Spider King’s Daughter).

“There’s one advantage to living here – there’s a lot less internet restrictions so you can download most of the stuff. Pay-per-views don’t work here. So, you use other means to get Arrow here, The Flash, Agent Carter, Daredevil, even Gotham and Game of Thrones.”

Has he been writing, then, since he was a teenager?

Andrew: “I stopped writing at some point, and I only started writing again because I wanted to impress a girl. I mentioned in passing that I write and she said, ‘You know what, show me one of your stories.’

“So I had to write a story like – fast! I ended up writing a story in like two hours. I gave it to her and she liked it. I’m not sure that she really, really liked it. Maybe she liked it because she liked me. I still know her but we’re not really that close any more. She told me to show other friends, so I guess the circle started growing. I thought ‘OK, these are my friends. If they are lying that they like it, I guess we’ll see.’

“There is a website called Africa Book Club, which I stumbled on. They had monthly writing competitions, first prize 50 dollars and a choice of books. I submitted a couple of stories to them. I was runner-up with a story called ‘Priest’ about a congregation who didn’t like their priests they were sent by the main church and so they got rid of them. It seemed people liked that and it came out in the Africa Book Club anthology for that year.

“My parents knew I loved reading, but they didn’t know I loved writing until 2013 when Africa Book Club sent me the anthology.

“Then afterwards I discovered Africanwriter.com. I submitted a couple of stories and they published them. One was called ‘My Grandmother’. A boy witnesses his grandmother telling a guy ‘I have no more kids, only grandkids. You have six or seven. I want one of yours.’ So the guy says ‘I cannot do that’. A few days later, the guy’s kids start dying. Local kids are stealing from her. One goes blind and loses the use of his arm. It is basically about a young man who witnesses his grandmother’s peculiar tendencies before and after her death.

“My Grandmother” can be read on Africanwriter.com.

Andrew: “That’s when people thought I was weird. Then I wrote ‘The Graveyard,’ about a Member of Parliament who wants to use witchcraft to get re-elected. He goes to an old woman famous for that sort of thing. She lives next to a graveyard. But the old woman – let’s just say she has an agenda of her own.

You can read “The Graveyard” at Africanwriter.com.

Andrew: “Not that many people here write fictional stories about traditional beliefs, which is weird. When you’ve been in Malawi all your life, those stories about witchcraft, you just can’t avoid. People say that writing about it puts Malawi in a bad light, but at this point I don’t really care that much. It’s a part of fiction that hasn’t been explored.”

I mention that Lake Malawi plays a role in more than one of his stories.

Andrew: “Not only is the lake a source of pride, for a writer there are so many ideas you can take out of that lake. There’s the story, ‘CheBoti,’ about an old man who is resisting attempts to develop the lake. He’s shot and the lake takes him back as a favourite son. The lake is almost an intelligent character in that one.”

The lake also features in his novella for AfroSFv2, a tale of humanity being culled by alien predators.

Andrew: “A few years back, we were celebrating 7 billion people on Earth. We were talking about overpopulation and I wondered why we were celebrating. Then I thought, what if when get over a certain population, something starts to cull us. I thought there would be two ways through which that could happen – either God would start to cull us or it would be due to something we hadn’t heard of before. The latter sounded more exciting – God culling us has been done and dusted since Noah.”

Right now he’s working on a longer story and he’s just finished a short called ‘Judgement Day’. The novel he’s working on is about people stopping themselves from sleeping because if they sleep, they do evil things, like stabbing their parents.

Does he think writers are born or made?

Andrew: “That some writers are born is possible. For some, you can be made into a writer with practice. I wasn’t born a writer, I think. It just sort of interested me. When I read something I would think ‘If I can be this thrilled by a story, maybe I could do this for someone else!

“So me, I don’t go out much anymore. I’d rather stay at home with a book or a movie with a few bottles of beer.”

But he’s chuckling as he says it, and gives me a list of all the best clubs in Lilongwe.