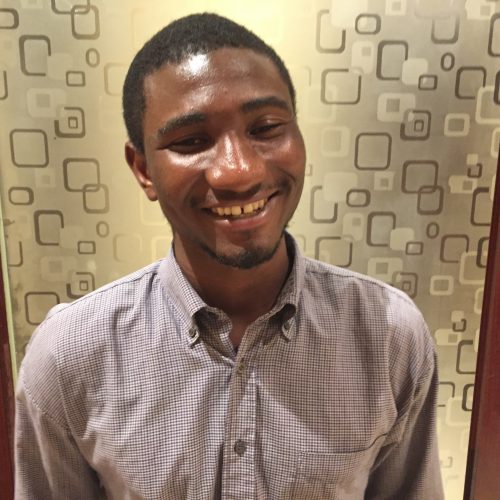 In the darkness, I tried to imagine the location of the door, but I failed.

‘What?’ I asked, not sure of what she wanted me to say.

‘Lights on. Please just say that.’

Not sure still, I said ‘You want me to say lights on?’ It was a question but soon the room was lit and I looked up, surveying it in full surprise. The ceiling was superb, something I had never seen before. It was made of gold. The fluorescent lights attached to it were bright enough to light a stadium. To my right was an office desk with four mini laptops, the sole pieces of furniture in the room.

I rose to my feet and worked my way to the door. It had the look of a lift master compatible garage, but more advanced.

‘Just say “open” instructed the voice from outside.

—From “Closer to the Sun,” by Aubrey Chinguwo, Imagine Africa 500

Aubrey Chinguwo started writing when he was 14 years old after doing well in a school essay competition. Like many young Malawians, he relied on a mix of competitions, local newspapers and websites for publication. He has lost count of the number of stories he’s written but in all he’s published around 60 stories.

Aubrey: “In Form 1, that’s when I turned to short story writing. It was great. I was 14. And that was when I settled it in my heart that I was going to be a writer. There were some setbacks too when my English teachers wouldn’t read my short stories and edit them for me. It seemed like they didn’t have time for that, so I thought I wasn’t a good writer, and I quit. But then in Form 2, I started writing again and again. That’s when I wrote much of my short stories that I just kept and they have actually been a few of my best pieces so far.”

In 2011, when he was 19, Aubrey had his first publication in the Malawian The Sunday Times, “November Criminals,” a short story about two criminals who are friends – until one of them accidentally kills the other’s mother.

Aubrey: “I didn’t know it was published until December. I went to buy the paper to see. I was telling people that I’m a writer but that was the only piece I could show.”

He had already sold another short story, “Goodbye Thandi,” but it took months to appear, in February 2012.

Aubrey: “‘Goodbye Thandi’ was later anthologized in The Familiar Stranger, a book that was selected by the government to be taught at the Junior Certificate Education level. Tuntufye (Tuntufye Simwimba, author of ‘Tiny Dots’ in Imagine Africa 500) is in there with some of his poems. Since then I have published and written a lot as well.

“Another anthology will be on the market soon. It has one of my stories, ‘Not Just a Mother’s Fight,’ about a girl who is epileptic so her parents cannot enroll her to access any education. It was in Position 8 of the 2013 Malawi Writer’s Union Short Story Competition and also it was translated into Chichewa for an anthology named Kusinta Mongani, so in English it is like Changing your Mind.

“I have read much of Shadreck’s work. I knew his works in Primary School. The books of his I had read were in Chichewa. The first essay I won the competition was in Chichewa as well. In Primary School, you just read some things without knowing what you’re reading. I read a lot.

“In Form 1, when I started writing in English I started reading it as well. That’s when I came to know Edgar Allan Poe and he is one of my best authors as well. The only book I read within a day was The Night Train by Judith Clarke. It was one of the books I got as a prize after getting position 8 in the competition. Once I started reading the book, I couldn’t stop.”

In November 2014 Aubrey joined the workshop that rests at the core of the anthology Imagine Africa 500 (Pan African Publications). The workshops were followed up by mentorship with professional writers. Aubrey worked with the Ugandan author Beatrice Lamwaka who acted as a mentor. The five Malawian stories that were accepted were then edited by Billy Kahora, the chief editor at the Kwani Trust.

“I didn’t have any idea to write a science fiction story set 500 years in the future, until Shadreck called us for the workshop, which was hard work for the first time. It wasn’t that easy to make something, and we didn’t have too much time. When you are told to write something, you can think and think and you end up not writing something, but me I just had an idea, imagining something that can end the world and start new lives.”

He wrote “Closer to the Sun” after the workshop, working with Beatrice Lamwaka. In this future, Africa has become one nation and the capital is in Uganda. A woman computer genius hacks into the world control system to change Earth’s orbit – and wipe out humankind. She has brought a young man forward in time to be an Adam to her Eve.

Aubrey: “I will be writing more science fiction. With the workshop Imagine Africa 500, I made a contribution to the book. Because right now as writers we are looking for something different, we cannot continue writing the same things over and over again. We are trying to find something that people haven’t written that much. And science fiction is just gaining ground right now. We have written a lot of short stories about the past and our traditions, and I think it’s time for technology to come up.”

Since then his children’s short story “Tiseke and the Tree” was shortlisted for the Peer Gynt Awards 2015. He’s drafted a novel that he is looking forward to revising, and is working on a 20,000-word story for children. He’s also just sent a short story, “A Voice of My Own” to the current Malawi Writers’ Union competition.

“Writing is work and sometimes I’m so tired I just read something and go to sleep. I started staying alone in March. I am 24 years old.

“Some of my stories are up on Shortstory.net. On there, people read and point out mistakes and tell you what to correct. One of the things I always wanted was to be an information systems expert. I’m currently working as a bank teller, a cashier.

“At night, I give myself an hour to read and probably write as well because if I don’t find some time to write, I could just kill my talent.

“I just want to thank Shadreck for what he is doing, because I never knew I would reach this stage. The problem here in Malawi is exposure, the connection, we have very good writers who are publishing in newspapers and magazines but they cannot get to the right people who can publish them like in Imagine Africa 500. Shadreck’s passion for writing is really taking us to other levels.”

Aubrey has been inspired to follow suit. When I spoke to him in October 2016, he was planning to launch a publishing venture of his own. Since then he’s continued to ask questions about making it work as an online magazine to be called Tiwerenge (“let's read”): Fiction from Malawi.

“There is a problem of publishing here. People have good works but they cannot publish a book. And I think we are lagging far behind in terms of online publishing. One thing I didn’t say was that I studied information systems. I’m developing works on my own, I’m doing everything on my own. The programming and everything. Just to have a website where people can reach stories of Malawians. So when I’m done it will be online. But it’s for free, no payments. So work that belongs to colleagues.

“Possibly by December it will be ready. Right now, I already designed the pages, I was testing the comments, for submission. I decided to do that since I was a writer and a website programmer as well.”

By May 2017 Aubrey's literary magazine was up and online with a story from Andrew Dakalira. Take a look at the professional sheen of Tiwerenge. Aubrey is soft-spoken but there’s a certain fire there – his online fiction on short-story.net has the identifier “genius” in the URL.

Imagine Africa 500 is available both in a handsome paperback or more readily in a Kindle edition, credited to Muthi Nhlema and Dilman Dila.