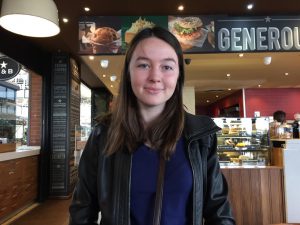 Once upon a time there lived a boy-girl named Cynae. After a series of difficulties, she came to live in a small house in the woods.

And yet, the impasse remains. It would be too inelegant to avoid pronouns altogether, as in 'Cynae came to live in a small house in the woods'. The option to adopt 'zie' is tempting, but will draw attention, and there remains something uncomfortable in addressing a single person as 'they'. After some anxiety, we come to a reasoned decision. There are sufficient stories where the principal character is a 'he', thus we shall use 'she'.

In the woods there is a house. It is an old house, a broken-down house, a quiet house. Fine-leaved creepers snarl over the crumbling walls, their waxy fingers tangling, pressing against the window panes and inching down the chimney. This old house in the deep green woods was where she lived. She lived in the shades and the silences and in the old green places beneath the tumbled-down roof. In the house, she lived.

Was she lonely, cold, angry? We cannot say. Sometimes, in the bare, alien air of the dawn, she looked toward the sky and an expression crossed her face, the reflection of a feeling complex and delicate and powerful, but we cannot determine what it meant.

That is not to say that Cynae lived alone in the woods.

In the woods there is a house. It is an old house, a broken-down house, a quiet house. Fine-leaved creepers snarl over the crumbling walls, their waxy fingers tangling, pressing against the window panes and inching down the chimney. This old house in the deep green woods was where it lived. It lived in the shades and the silences and in the old green places beneath the tumbled-down roof. In the house, it lived. At certain times of the day, it cast a shadow.

A village bordered the woods, a small hamlet holed into the side of the valley, where perhaps a hundred people dwelled. And sometimes the women of the village would see it in the woods, but the men never did, for they feared the deep green places and their shades and their silences.

You should stop reading.

From “Bombyx mori,” by Kerstin Hall

Kerstin Hall is an MA student at the University of Cape Town. She is also a published author, the founder of a new African SFF magazine, until recently the Submissions Manager of a Cape Town literary magazine, a fiction editor at sub-Q, and an editorial assistant for the US-based magazine Beneath Ceaseless Skies.

What she notices is a lack of submissions by African writers. “I’ve worked at Beneath Ceaseless Skies now for five months now. It is international and accessible, and yet I haven’t seen a single African submission. I don’t know if we have a confidence problem, but we’re not submitting as much as we should.

"I thought that by joining the magazine I could subtly increase the number of African stories coming out, but I haven’t been able to. Beneath Ceaseless Skies is pro—it pays 6 cents a word, which is good money in rand terms. It’s also a SFWA-qualifying market. I had expected local writers to be pushing their stories to publications like BCS, but my experience has been the reverse.

"In South Africa, there is no culture of conventions; at least not for genre writing. They all seem to be one-offs. Maybe aspiring writers aren’t aware of opportunities available to them, maybe they lack the information networks that exist overseas. Plus, there’s a certain level of disparagement towards fantasy and science fiction in South Africa, even amongst the writing community. People are trying to be the next Coetzee; genre is not taken very seriously. We do a roaring trade in sombre memoirs, but I can’t point you to a single South African space opera."

Kerstin founded the WordPress-based Luminous Worlds to be an African SFF magazine. "I think we’ve had more submissions from Americans than from Africa.

"At Rhodes University, I ran a creative writing society, but since coming to Cape Town I haven’t felt same sense of community; so I wanted to build a Capetonian equivalent. I feel like there is a strong desire to support other writers. There are a lot of people in this country who want African fiction to do well.

"Luminous Worlds can’t financially compensate people for their writing. We try to compensate them with exposure, which is terrible, but as an organization that doesn’t have money, our options are limited.

"I started with the idea of bringing together art and literature, making stories more visually appealing for online consumption. It was very very difficult to get submissions. We got about six. Response has been slow to the first issue, so I don’t think our readership is that big. But now that we have that one issue out, hopefully it will be easier going forward and we will receive more submissions.

"I just quit Typecast, a South African literary magazine specifically for poetry and short prose. We got so many submissions, it was insane. I was submissions manager, and I think we got 200 in our first call. Yes, we had better social media coverage for Typecast than we had at Luminous Worlds but I still don’t know if people are writing genre to the degree that they are writing literary fiction."

Though still completing her MA, Kerstin is a published author. At the time of the interview, she was about to have her story "Bombyx mori" appear in—ahem—Strange Horizons.

Kerstin: "The title is just the scientific name for a silkworm. It’s about gender fluidity and uncertainty, and it’s a kind of meta fairy-tale. Hopefully scary. I don’t ever reveal if the narrator is who you think they are. A person lives in the woods and they may or may not be murdering people."

One of her first stories, "In the Water" appeared in the Short Story Day Africa anthology, Terra Incognita. It’s a horror story about a water demon that drowns its victims. "Unfortunately, it’s not my favourite piece, I haven’t read it in a while, but I remember it being in first person from the point of view of an isiXhosa man. I had studied isiXhosa for a year and, in retrospect, I don’t think that gave me sufficient access to write that story. No one has criticised me for it and I don’t hate the piece, but it’s not what I want and I can do better. My knowledge of sangomas was not as thorough as it might have been."

From my point of view—at least she is writing about Africa. A lot of white South African authors are writing the stories they would be writing if their families had never left Europe. I ask her if she ran her story past any isiXhosa speakers.

"I ran it past my isiXhosa lecturer. She just corrected my grammar. So ... (chuckles, embarrassed). I’m in two minds about it. White South African writers—we do this annoying 'I’m white and terribly sorry about it' preface. I read and hear it a lot. To me, apologizing for your race doesn’t fix the problem. The authors who do this, their stories are always self-conscious and 'ironic'; there’s no bravery or sincerity in them. Instead of apologizing, write with more empathy, tell better stories, put yourself out there, listen to criticism, learn. I just feel it’s hypocritical. Are you telling a story, or showing off your wokeness?

"I don’t see how you can write about South Africa without having black characters, so I will continue to write them. But I might not be so specific about cultural references in future."

When she saw the Terra Incognita table of contents, with all the European names, did she go "Oh Jesus"?

"Maybe not quite that strong—more like 'oh well.' There are people in that anthology who are trying really hard and I feel that Short Story Day Africa is getting more writers from more countries and more backgrounds. And perhaps the theme that year particularly appealed to white South Africans."

Why does she think South African science fiction and fantasy writing is so dominated by white people?

"I feel institutionally—that sounds pretentious and university-esque, but—institutionally it has been dominated by white people in the past, which means that the norms of science fiction and fantasy are European. So it’s more accessible to white writers, even if they are part of the diaspora, than it may be to others. When new fiction is released, the more recognizable forms get more attention.

"You said that person’s book (Jennifer Makumbi’s Kintu) was too African for European publishers. I feel that happens here too. There are imprints in South Africa that are searching powerfully for African voices, but our literature doesn’t seem to have great export value. The overseas market is not buying it, and locals aren’t buying enough of it, so being an author in Africa is not financially viable for a lot of people.

"Also, I think that historically, the canon of SFF features white characters and that’s not a lot of people’s reality here. The divide can be bridged and will be bridged and it’s in the process of changing. I’m hoping a wave of more representative African SFF is rising. But that’s really just me talking as a South African, and I think things differ depending on your location. As a Mandela-Rhodes funded scholar, I’ve been connecting with Kenyans and Cameroonians and seeing how different their perspectives are. South Africa is seen as being the USA of Africa, and it has such a superiority complex. It’s been interesting to see how other people view us—as arrogant, a lot of the time, which is probably justified."

At the time of the interview, the FeesMustFallFall movement was bringing university life to a halt, demanding free education for all and de-colonialization of the teaching and curriculum. It was not clear when we spoke in October 2016 if exams could possibly go ahead. According to Kirsten, "it depends on the government’s reactions. The sense of helplessness is really really strong. The protesters feel they’re not being listened to, and the campus administration feels the protesters aren’t listening to them, so it’s a negative spiral. The universities can put pressure on government but they can’t ultimately make government move.  People have the power to protest, but whether the government listens is an entirely different matter. South African politics and US politics have their similarities, particularly at the moment."

Is there anything she would like to say to readers in the USA and the West?

"About fiction? Just because it doesn’t read the same doesn’t mean it’s not applicable to you as well. Just because stories are unfamiliar doesn’t mean that you can’t gain from them or empathize with them.  I don’t think international readers should see African fiction as the Other."