Non-Fiction, Reviews
Size / / /
An Unkindness of Magicians by Kat Howard
By: Christina Ladd 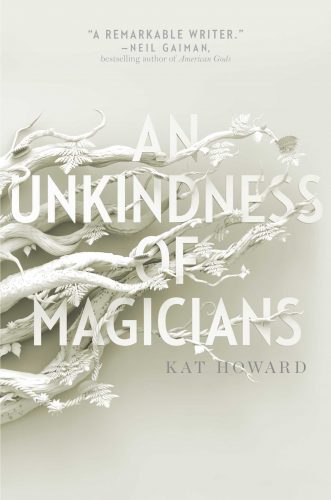 I'm pretty sure Kat Howard must have read "The Ones Who Walk Away from Omelas," Ursula K. LeGuin's meditation on utilitarianism, before writing her sophomore novel. In “Omelas,” a paradisiacal city scapegoats all of its evils on to one child, who lives in unimaginable misery so that all others can live well. Those titular "ones who walk away" are the proud few who cannot stomach such an arrangement. Defiant or despairing, they leave. But I did always wonder—why did no one try to stop it? I’m thinking Howard must have wondered too, since An Unkindness of Magicians asks and answers the question masterfully.

The collective noun "unkindness" is usually reserved for ravens, which makes as good a comparison as any: the magicians of Howard’s New York City are fond of shiny things and know how to hold grudges. They're clever, social, and most of all, they're opportunistic. Fortune's Wheel seems to be the closest thing they have to a faith, and they delight in its turnings with vicious glee.

Fortune's Wheel implies the usual vagaries of circumstance but, more importantly, it indicates the once-in-a-generation competition between members of the Unseen World as they vie for power. In this novel, magic has a price, and the price is pain. Participating in the tournament also has costs, since certain duels are to the death. Being rich and powerful, most magicians don't want to pay either of those costs, and find others to do it for them. This is the time when Houses and individuals can rise or fall, and also when combatants can avenge anything from a social snub to a murder … or their own torturous internment, since birth, in a prison that forces them to bear the pain of spellcasting so that the rest of the Unseen World doesn't have to—and simultaneously extracts their magic.

Kat Howard has mastered the art of killing her darlings. The prose isn't sparse, it's just exactly what it needs to be and no more. Howard is self-assured, and with good reason: what remains after this paring-down is elegant, brutal, and swift. It reminds me of nothing so much as a very expensive car hitting the upper limits of its speed, a thousand little parts working in perfect synchrony to produce something beautiful and dangerous. I often found myself stopping because I had to marvel at the way I simply knew the characters. Knew them well enough to understand what grave moral choices they would make—even after a hundred pages, even with multiple POV characters, even with a complex world I was still working to fully understand. She makes it seem effortless.

Amidst this huge cast of characters, An Unkindness of Magicians is not about the privileged so much as it is about those who are complicit. The greatest and most offensive lie is told by a magician, a head of House no less: "That is the way our world is … you can't change that," (p. 209) she says, with an unhappiness that is no less hypocritical for being heartfelt. Magicians, who subsist on a diet of wonders, cannot be bothered to imagine a society that does not pay a tithe of children or stand on a foundation of bones.

But then, why should they? Their lives are rich and full, and most do not directly hand over the infants. Why should they care what happens to people they don't even know in a place they never visit? It's for the common good, isn't it?

How much can you say you didn't know? How much do you have to do to the fight the system to be morally exempt—or at least morally grey? Howard deploys her remarkable cast of characters to embody many of the points on this continuum with compassion, but without letting anyone off the hook. The weight of various characters' sins are heavy, and you feel that weight palpably in many, many scenes. But Howard also takes particular care to demonstrate and celebrate the many forms resistance can take, whether the defiant are powerful or not: a genius spellcaster gives up his inheritance, but a bartender also makes sure to provide spells to women who might be vulnerable and alone. For a story about a world that mutually assents to the perpetual torture of children, it is remarkably hopeful.

Most of the tension comes from the strength of the relationships being pitted against one another—brother against sister, lover against lover, parent against child. The potential tragedies pile up, bound by a magical system that might be the real enemy, but one that is composed of people more than spells. The tournament itself is a bit like The Night Circus (Erin Morgenstern, 2011), if the circus were a battle royale and not a choreographed duel, and if romance were a tertiary concern at best. Instead, it's best-friendship that moves hearts and mountains here.

Harper, for example, has devoted her life to finding out who murdered her best friend Rose back in law school; Sidney and Madison are quietly and unflinchingly devoted to each other despite threats to life, limb, and career; Gray and Laurent defy the conventions of Unseen society every time they so much as go running together, since Gray is the son of great privilege and Laurent is both black and unallied to a House. All of these friendships are tested, and some break. But some expand and grow, drawing in others, making a small but very real community by the end of the book.

It's quite beautiful to see women helping women, the abused helping the abused, and the law working for victims (even at a large corporate firm, which might be the most fantastical element of this story). Survivors of many kinds of suffering get to be complex here, get to have conflicting desires and feelings that add up to a far more complete story than a simple tale of revenge. Especially notable is the compassion of so many of the characters: the ostracized, tormented, and betrayed are angry and frightened as anyone would be, but they also want desperately to prevent anyone else from suffering as they did.

The villains, however, encounter suffering and want to put it off. You would think that being unable to accept reality would be an advantage to a magician, but Howard’s characters can’t really know what’s possible until they also understand what is. Howard makes the duels and the politicking about the consequences we can and cannot bear, and how we negotiate between them. None of this is ever anything so facile as choosing between love and money. Success is not evil and love is not enough: e­veryone is choosing, duel by duel, how they want to build their whole world.

Some of these confrontations might have benefited from a bit of uncertainty to ratchet up the stakes. All the magic duels are beautiful, but Sidney's magic, for instance, is significantly over-powered in all but a few of them. Seeing her demolish the competition on her righteous crusade is satisfying emotionally, but is rushed dramatically. This comes to seem a small issue, however, since usually in a novel such as this, emotional themes are in the background, or crop up only at the end when a character realizes that revenge isn’t enough (yawn); here they are foregrounded, and make already compelling characters truly fascinating, regardless of the pyrotechnics. The power levels are also appropriate to the larger conflict, which revolves not around individuals but the magic community as a whole, and their right (or lack thereof) to use individuals for collective gain. Sidney may be only one person, but she stands in Individuality as a concept, and Howard very much argues that self-determination is a mighty force against societal evil.

An Unkindness of Magicians is, I am profoundly grateful to see, grim but not grimdark. In less capable hands it might linger on the blood, the death, and the torture. Instead, Howard makes her novel a story about resilience, not just about winning freedom but the shapes that freedom takes. What does recovery even look like? It's vengeance, yes, and justice, but also kindness, and pleasure. Living well, according to Howard, is just one of many best revenges; the others involve tearing down your enemies, terrorizing their supporters, pulverizing the systems they created, and using the ruins to build something truly worthwhile. “The Ones Who Walk Away from Omelas” argued that the only way to win in that kind of system is not to play; Howard says that the only way to win is to win, win so often and so thoroughly that you bankrupt the house.

Like Loading...
© Copyright 2017 By: Christina Ladd
About Christina Ladd
Christina Ladd is a writer, reviewer, and librarian. She lives in Boston. She tweets using the handle @OLaddieGirl.
No comments yet. Be the first!