Live Long and Marry, begun to fight efforts to pass California's Proposition 8, was one of the first LiveJournal auction communities run by fans.

Years before MySpace, Facebook, and Twitter shook up the Internet and changed the way the world thought about blogging, social networking and even advertising, there was LiveJournal, which revolutionized the blogging world in 1999 when its open source project went live. Indeed, the site's user-friendly interface still remains popular with old-time users and new users alike: Just months after its 10th anniversary, LiveJournal boasts 25.1 individual accounts and communities—many of which have some relationship to science fiction, fantasy, and horror fandom. For whatever reason, the site has long drawn a healthy cross section of fandom to its user base, from high profile professional authors such as Elizabeth Bear and Jim Hines, to gamers, fan artists, fanfiction writers, roleplayers, fanviders, and those simply looking for communities to discuss their favorite movies, novels, and TV series. LiveJournal's fannish users are, indeed, legion, and when they organize the Internet pays attention. In 2007, for example, when news of LiveJournal's suspension of several users who posted NC-17-rated fanfiction and fan art spread through the site's fannish circles, the outcry was tremendous. Angry fans flooded the comments of LiveJournal's news community, demanding to know what had happened. As talks of a fannish boycott spread across hundreds of communities, the debacle also made news around the Internet, where it was dubbed Strikethrough 2007, after the strikethrough indicating a deleted LJ account. Eventually, LiveJournal responded by restoring several of the vanished users and communities and clarifying its policy on posting adult-themed fan works.

Regardless of the shows they watch or the books they read, fannish LiveJournalers tend to be a close-knit and generous group with a reputation for protecting their own. Not even two years after Strikethrough, the LiveJournal fan community united against a problem that affected far more people than the site's user base: the 2009 U.S. recession. And they did it in a most creative way: By auctioning off everything from DVDs, books, and memorabilia to crafts, fanart, and fanfiction to make rent money, pay hospital bills, and save the homes of fans and pros alike from the rash of foreclosures sweeping the United States.

Using LiveJournal's community accounts—that is, journals that allow multiple users to post—fannish organizers set up hubs where fans could list items and services for auction to help fans and pros struggling to make rent, pay unforeseen hospital bills, or save their houses from foreclosure. Organizers counted on word of mouth—or, perhaps, word of post—to spread knowledge of the communities, and bidding was as easy as leaving a comment on an entry for a desired item or service. The highest profile beneficiaries included Vera Nazarian, author and owner of the small press Norilana Books, author Catherynne M. Valente, musician S.J. Tucker and a man known only as Dave, whose house and land played host to several traveling musicians. Astoundingly, in all four of these cases and many more, generous LJers were able to raise enough money to keep the wolves at bay—if only temporarily.

The grandsire of these auction communities is, arguably, Live Long and Marry, a late 2008 effort to raise money to fight Proposition 8, an ultimately successful ballot measure that re-banned same-sex marriage in California less than six months after the state's Supreme Court struck the ban down as unconstitutional. True to its fannish roots, the community's name punned on the Vulcan benediction "live long and prosper," a sly reference to the fact that openly gay Star Trek: The Original Series star George Takei's marriage would be annulled if Proposition 8 became law. By the auction's close date of July 20, 2008, the community had raised a whopping $43,028.93 for anti-Proposition 8 groups including Equality California and Marriage Equality USA. [1]

While none of the following LJ auction communities saw such great returns, they nevertheless raised remarkable sums that saved homes and even lives. In December of 2008, author Vera Nazarian made a LiveJournal post detailing her struggle to make payments to her sub-prime mortgage loan as the housing market collapsed across the United States.

"[T]wo days ago, Countrywide has ended my mortgage forbearance, and now I am in the process of getting them to look at restructuring my evil sub-prime loan, while I am officially three months behind on my mortgage which is due and payable NOW," she wrote on December 5, 2008. "Things are falling apart in many relatively minor ways—the sewer main line needs to be replaced [and] there is a small roof leak." [2] 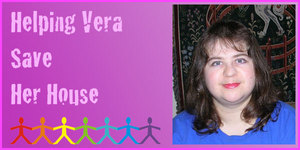 The banner for the Help Vera LiveJournal community.

Within hours, two LJers and friends of Nazarian, Rose Lemberg and Deirdre Saoirse Moen created Help Vera, an auction community identical to Live Long and Marry in form and function. By December 11, LiveJournalers and prominent authors such as John Scalzi raised enough to fix Nazarian's sewer and pay off the first month of her backlogged mortgage. The overwhelming response and its rapid spread across the blogs of fans and pros alike left Nazarian speechless for several days.

"Most of Friday I spent in bed, weak and anemic from bleeding, and later when I checked the computer and saw ALL OF THE MESSAGES and the posts and the immense comments, I started to cry," Nazarian wrote. [3]

In total, the Help Vera community raised $30,685.91 in contributions. [4] Like Live Long and Marry, however, the donations did not accomplish exactly what Lemberg, Moen and donators had hoped. Nearly one year to the date of the auction's close, Nazarian posted that Bank of America (which absorbed Countrywide during the near-meltdown of the U.S.' financial system earlier in the year) still had not modified her loan papers. Nevertheless, fans were again quick to respond when Nazarian asked them to purchase her book Mansfield Park and Mummies to help raise much-needed income.

Of course, not all LJ auctions have such bittersweet results. In March of 2009, fans and friends of musician S.J. Tucker raised thousands of dollars needed to pay down hospital bills when Tucker—who lacked health insurance—was treated for appendicitis. And in June, events surrounding Catherynne M. Valente's recession-related cash crunch lead to something truly miraculous. As Valente's then-fiance Dmitri Zagidulin's months of unemployment continued and money for food and rent ran low, friends and fans again announced the creation of an auction community, Adopting Cat. Simultaneously, Valente launched a unique effort in publishing: She would write The Girl Who Circumnavigated Fairyland in a Ship of Her Own Making, a fictitious children's book mentioned in her novel Palimpsest. She posted the novel online for free and encouraged readers to donate via Paypal if they enjoyed what they read. Ultimately, the combined efforts of the auction and the Fairyland novel not only paid down Valente's rent and filled her cupboards, but lead to her first YA book deal. On Oct. 19, Valente blogged that the book and a sequel had sold to Feiwel & Friends, a YA imprint of Macmillian. 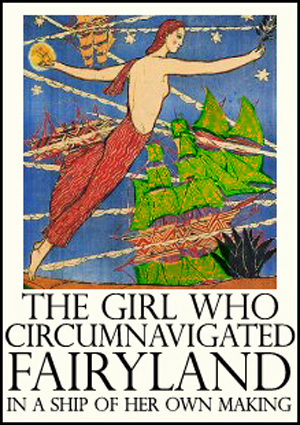 Several artists made designed graphics to promote Valente's novel, such as this logo.

"It's real and it's happening—which I have to keep telling myself," she wrote. "And in large part it is due to you guys, your enthusiasm, your reading every week, your loyalty, your love. Thank you so much. This has been overwhelming, one of the most amazing trips in my life. And it strikes me as wonderful and astonishing that something so very, very Web 2.0, born and bred and thriving online, can be so embraced by the traditional publishing world, can become a hybrid of the old world and the new, so very like Fairyland itself." [5]

In the end, the same could be said of the entire LJ auction movement, which shows no signs of slowing down as 2010 stretches on. Just days after a 7.0 earthquake rocked Haiti, another LJ community shattered the record previously set by Live Long and Marry, raising $115,000 for the survivors at press time (another auction will take place later this month). [6] This time, however, the auction broke from the fannish community to the Internet at large, according to Heidi Tandy, one of Help Haiti's organizers.

"[W]e had people coming and using OpenID logins from all over the Internet to offer and to bid, which is phenomenal. It shows the importance of platform-wide logins, too, from a technical standpoint," Tandy wrote.

While Tandy and other organizers sometimes found that LJ's platform made some aspects of the auction difficult, such as tagging individual auction threads in an auction that included more than 4,000 items, she cited the platform's familiarity to fandom as one of the reasons LiveJournal has endured as a popular platform for such auctions.

Like Valente, she also recognized fandom's generosity and its desire to help as the most magical thing about the auction movement.

"I think it's because we [fans] are a community and there are commonalities—including interest in other people and concern for them. Plus, many of us are vaguely technically inclined or at least comfortable with the Internet and doing things on it—we're more likely to buy things online, or have Paypal accounts, than the general population, so we're an ideal group to grab ahold of the platforms that exist and use them for these kinds of productive purposes," she said.

[6]" A Fandom Auction to Help Haiti Recover. Relevant to Your Interests."