Articles
Size / / /
From iTunes to the Bookshelves: The First Wave of Podcast Novelists
Shaun Farrell

The podcast novel (often referred to as a podiobook thanks to Evo Terra of Podiobooks.com) was first introduced to the Internet masses in 2005 by trailblazing speculative fiction authors Scott Sigler and Tee Morris. Since then, hundreds of authors have entered the podosphere as an avenue to an audience and perhaps professional publication. Their audio productions feature pro-level recording quality, tantalizing vocal performances, music, sound effects, and, in some cases, accompanying PDFs, images, and videos. A question faces these authors, though: can they sell books in traditional bookstores? 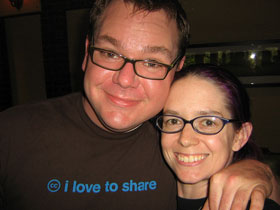 "Podcasting is a form of distribution. It's the content of the podcast that stands up in the end," says Mur Lafferty, author of the superhero podcast novel Playing for Keeps and the Heaven series of fantasy novellas. "It's just another form of self-publishing, of building an audience without worrying about impressing an agent or a publisher."

And while the podcast novel has attracted thousands of fans, it is unclear whether famed and celebrated podcasters can generate similar enthusiasm from the book-buying public, many of whom have never heard of podcasting. Several authors, however, are poised as forerunners who may well determine the long-term publication prospects of the fiction podcaster.

Scott Sigler, science fiction and horror author of such podcast sensations as Earthcore, Ancestor, and The Rookie, is leading podcasters forward into print publishing's elusive pastures. Sigler says that the 2008 hardcover release of his novel Infected, which follows a protagonist plagued by a horrifying disease, is "doing very well. I'm told that for a first-time hardcover novel, we knocked it out of the park. The publisher [Crown] is happy and excited and pushing for the sequel." Infected's status as a new release makes it difficult to determine Sigler's staying power with readers, but this initial victory gives encouragement both to him and to podcast novelists whose works are being prepared for print débuts.

Among these authors is J. C. Hutchins, whose 7th Son is the most popular trilogy of podcast novels to date. This saga chronicles the lives of seven clones who are thrust into a world of scientific experimentation, conspiracy theories, and impending global destruction. The first book of 7th Son will hit bookstore shelves in 2009 courtesy of St. Martin's Press. "Book one is the only book that has been purchased at this time," Hutchins says. "I am confident that the book will earn back its advance and will be profitable for St. Martins and they will move ahead [with the rest of the trilogy]."

Not to be outdone, podcast novelists Seth Harwood, Matthew Wayne Selznick, Matt Wallace, and Mur Lafferty have all signed contracts with book publishers big and small. "I had 4,000 listeners on the morning of Playing for Keeps' launch," says Lafferty, "and I got linked from boingboing.net—one of my listeners submitted it—and by lunch an agent had contacted me. We eventually agreed that we wouldn't make a good match, but it proved the power of what you can do with a big enough audience."

The marketability of these authors' works will soon become clear, and the future of podcast fiction may well hang in the balance. "Publishers are watching these books," says Sigler. "Publishers are in business to make money. If they see that podcast novelists can move books at a higher rate than those that don't podcast, more people are going to get their opportunity. On the other hand, if publishers get behind me, Hutchins, and Harwood, spend money on marketing and promotion, and the books do not sell well, that will hurt the chances of other podcast novelists."

Hutchins adds that there is great pressure on podcast novelists due to "what is perceived as a pre-existing demand for the book because of the established fan bases that we have and from pre-existing hype generated by the authors and the fans. I've been banging the 7th Son drum for more than two years, and this creates a climate of expectation."

Ultimately, the stakes could be larger than the future of a few authors. Sigler sees in podcasting the power to drive a paradigm shift. His "greatest hope is that we put an end to the existing publishing structure where a small group of people gets to decide what is and is not 'good fiction,' and control what makes it to the reading audience."

Meanwhile, if authors like Sigler and Hutchins do achieve great success in print, Lafferty sees other problems on the podosphere's horizon. "I guess I fear the inevitable," she says. "The space will get clogged with authors desperate to get thousands of listeners without realizing the work that goes into that, both in writing and editing a good book and in marketing the podcast."

While not denying the barriers facing future podcasters, Sigler strives toward a singular vision: "a world where people can try out hundreds of authors, for free, to find the ones they love. It's the job of the writer to provide something the reader is happy to pay for—it's not the job of readers to give writers money. We're not entitled to anything. We have to earn it."

[1] The ARG genre combines elements of role-playing and scavenger hunting in an interactive narrative that is split across several media (for instance, websites, email, snail mail, and phone).

Like Loading...
© Copyright 2008 Shaun Farrell
About Shaun Farrell
Shaun Farrell is the producer of the Adventures in Scifi Publishing podcast, owner of Singularity Audio, a freelance writer, stay-at-home dad, and an actor. His email is adventuresinscifipublishing@gmail.com.
No comments yet. Be the first!