Articles
Size / / /
Going Beyond the Other Side of the Eye: An Interview with Bryan Thao Worra
Yuk Ki Lau 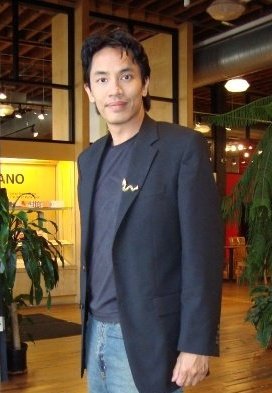 As I run down my strange streets,
An accidental alien without
A ray gun.

Laos isn't the first country you think of when it comes to science fiction. But Bryan Thao Worra is working to change that. Drawing on the 600-year history of his birth country, from the ancient legends of shape-shifting river monsters to the devastating Secret War of the 20th century, his efforts are even more remarkable because he is primarily recognized as a poet. Born in Laos in 1973, he holds a fellowship in Literature from the National Endowment for the Arts and the state Council on Asian Pacific Minnesotans has recognized him for his leadership in the arts.

There is usually a somber tone in work from Southeast Asian American writers. Thao Worra on the other hand, brings a unique sense of humor and depth to his writing. A few years ago, he organized "Giant Lizard Theater," a performance to showcase Asian American poets and artists in Minnesota that included the trampling of a cardboard Minneapolis. Journals such as Illumen, G-Fan, Tales of the Unanticipated, and the Journal of the Asian American Renaissance have featured his poems. His first book, On the Other Side of the Eye was released in 2007 by Sam's Dot Publishing, and is now marking its fifth year, the Year of the Dragon. In this interview, he was kind enough to share his thoughts on a variety of subjects.

Yuk Ki Lau:How long have you been writing speculative poetry?

Bryan Thao Worra: Most of my poetry has been speculative or clearly influenced by speculative elements from the beginning, which I would say began in earnest in 1990 in my senior year in high school, so a little over 22 years now. There've been moments where some pieces were more speculative and others less speculative in the way they incorporated mythic elements, folklore and futurism. There are very few poems of mine that don't at least edge towards it.

BTW: It calls to me. I enjoy the challenges within of trying to create so much within an economy of words.

Many of the classics of human literature are poetry. From Beowulf to the Ramayana, or "The Raven" and "The Jabberwock," we have a fine tradition of creating amazing stories through poetry. Many of the modern masters of science fiction and fantasy also wrote poetry, and we're seeing some particularly interesting work from poets like Toby Barlow and his prose poem novel, Sharp Teeth or Cathy Hong Park's Dance Dance Revolution.

Obviously, these days, most of us are finding most of our speculative literature in narrative forms, but we shouldn't count poetry out.

YKL:Let's be honest, there aren't many people in the West who are familiar with Laos. What parts of Lao culture have had the most significant impact on your work?

BTW: Laos has often been spoken of in diminutive terms, such as 'a tiny landlocked nation' or a pristine Shangri-La, which I've never fully understood, since Laos is the same size as Great Britain or Utah, and bigger than Minnesota, with 6 centuries of history. During the 20th century, we saw it tangled up in the Secret War that killed and displaced over half a million people. But until recent years it has been largely cut off from the rest of the world. This has its ups and downs. There's so much to discover there.

YKL:What's the best thing someone's said to you about your poetry?

BTW: I'm not sure if it counts as the best, but one of the most interesting critiques I got from a rejected poetry manuscript some years ago was "It's chaos. But it's controlled chaos." Who can ask for anything more? 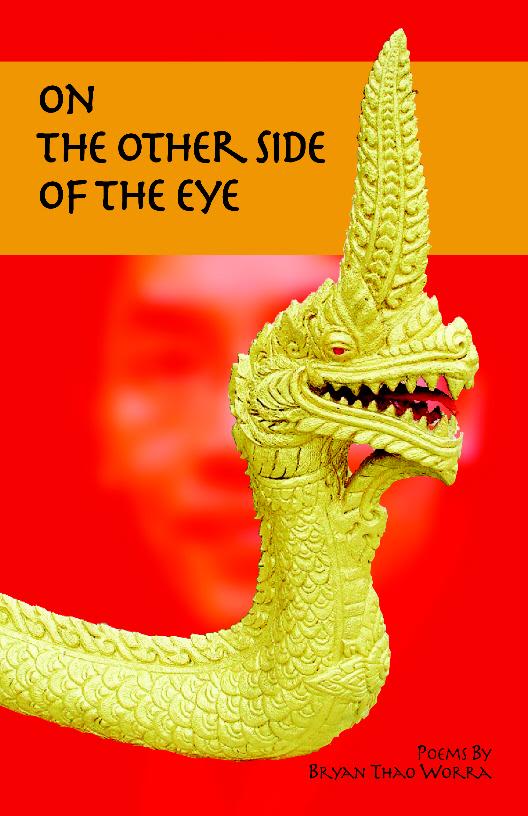 YKL:What was it like releasing On the Other Side of the Eye?

BTW: There were a lot of surprises along the way. There were some real uncertainties whether it was going to be something accessible yet true to the questions I'd wanted to ask. I had some wonderful support and enthusiasm from across the country, and it was a wonderful vindication that there was a market for Lao American speculative poetry.

YKL:When you look through On the Other Side of the Eye, you presented a lot of nods to Asian American history, such as the poem "Oni," where you mention the Vincent Chin case. What guided that process?

BTW: I grew up in Michigan during the 1980s when Vincent Chin had been killed. He was a young Chinese man mistaken for Japanese by laid-off auto workers in Detroit. His killers never served a day in jail. It was a significant moment for me that led to my awakening as an Asian American.

There are some people who think that when you write poetry, especially speculative poetry, you're supposed to shy away from the concrete and the political, but I disagree with that. But I also disagree with poems that are just rant-laced sociology textbook footnotes with bad line breaks.

There were many moments I found myself saying: If Asian Americans can't talk about our history in even that briefest of art forms, poetry, how can we expect others to? How would I face my grandchildren in the future to tell them we couldn't spare even a few words in a bit of verse about our journey, what we thought and what we dreamed?

Maybe, in centuries ahead, historians will say the people, the moments I wrote about didn't matter in the grand scheme of things. But in writing, I at least present some alternate candidates to consider.

A good poet can change cities, nations, even worlds, when they're at their best.

YKL:What's changed for you five years later after the release of On the Other Side of the Eye?

BTW: I've learned a lot more in my travels, but many of the original questions remain. How does a community of refugees like the Lao find ways to preserve our history and heritage while still daring to dream to consider the future? How do we confront the ghosts and demons of our past and meet new ones in such a changing America?

Shortly after On the Other Side of the Eye was released, I also received an National Endowment for the Arts Fellowship in Literature for poetry in 2009, which presented me with some extraordinary opportunities to connect with other Lao communities across the country. It's been great to see it taught in classes, and the questions students came up with. And of course, I've gone on to write several other books and connect with new audiences in some really unexpected places.

YKL:What were you thinking as you put together BARROW?

BTW: I wanted to ask what would happen if a word was given a chance to define itself within the space of a whole book, rather than just the constraints of a dictionary definition. One word can mean so many things. And how do we decide what a word does not mean? That all wound up taking me on an interesting journey between world myths and dreams, history and missed opportunities.

YKL:What is your biggest challenge submitting work to journals?

BTW: Laos is still terra incognita for most editors. Trying to present Lao concepts to new audiences has led to some hilarious exchanges where the editors could accept a piece with shoggoths and the Great Old Ones, but the use of Lao mysticism and references to the 4,000 year old culture of the Hmong was just too far out, apparently. If I talked about the nakagawat for a future Lao space program who would be like a taikonaut or cosmonaut, that was too far-fetched for several editors. But I don't get frustrated easily.

YKL:What are you working on next?

BTW: I'm working with Lao American writers and artists on the first anthology of Lao American speculative art. We have some amazing contributors already, such as the Emmy-winning Lao director Thavisouk Phrasavath, who contributed some of his speculative poetry. Saymoukda Vongsay is sharing her play Kung Fu Zombies vs. Cannibals. It's meaningful because so many of our writers are writing strict realism and memoirs. But we see very few writers daring to talk about our future, to push our imaginations to the fullest. I don't think cultures can survive long without that. At least, not interesting ones.

YKL:What's your favorite mythological creature from Laos, and have you written anything about it?

BTW: Undoubtedly, I'm passionate about the nak, which is commonly known as a naga in other countries. There are several poems over the years I've written about the nak, some as traditional guardians of the Buddhist temples of the Lao, other times in unexpected locations such as shopping malls. There's some amazing mythology and symbolism behind them, such as the nak who wanted to be a disciple of the Buddha but fell asleep and accidentally changed back to its usual form.

YKL:Why not just call them by the more familiar term of naga or dragon?

BTW: Confucius says wisdom begins when you call things by their proper names. A dragon is not a basilisk, nor is it a wyvern, nor a fire-breathing dinosaur. The Lao have a word for this being, they don't need to borrow a word from another language.

In some folktale collections, we see some people trying to equate another creature from Lao myth, the nyak, with an ogre, but that really doesn't do justice to the nyak's roots as a fierce rakshasha of Indian lore, nor recognize how it has changed from the root legends. It has become a being in itself.

YKL:What do you see as a future direction for Lao American writers?

BTW: It's a little up in the air. In the last 40 years, we've seen less than 40 books written by Lao Americans, although there are over 200,000 in the US. In Laos, the figures are a little better, but there's still so much more that can be written. There are writers interested in writing mysteries, thrillers and action novels, and of course, inspirational memoirs.

Many Lao love speculative literature. This year's Miss Minnesota, Nitaya Panemalaythong is Lao, and recently cited Professor Xavier of the X-Men as someone whose powers she wished she could have, and expressed her interest in checking out The Hunger Games when she gets some free time. The famous Lao singer Ketsana loves science fiction, especially Blade Runner. That's heartening.

I think we're going to see a mix of familiar and new ideas come out of Lao American speculative writers in the immediate future. Some are trying to update the classic myths such as the trickster figure of Xieng Mieng, but others are creating all-new characters like Kiwi The Green Koala. Having seen what's been submitted for the anthology of Lao American speculative art , I think there's reason to be excited.

YKL:Do you have any advice for emerging writers?

BTW: Read widely. Consider the many possibilities before you. Don't try to say things the way they've already been said. Risk, but always with good intentions when possible.

You can read more of Bryan Thao Worra's thoughts at his blog at http://thaoworra.blogspot.com.

Like Loading...
© Copyright 2012 Yuk Ki Lau
About Yuk Ki Lau
A British born New Yorker, Yuk Ki learned to speak English watching game shows. Now in Minnesota, he volunteers with non-profits, while working as a graphic artist. His passions include design, science and technology, the occasional bout of writing, and his kids. Currently he is a freelance e-book designer.
No comments yet. Be the first!