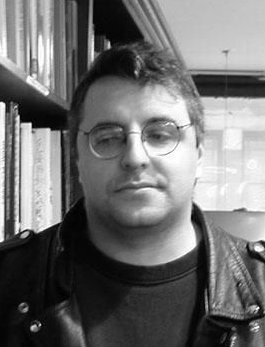 The writing career of Nick Mamatas has been nothing if not diverse. He's written everything from "model term papers" to "dossiers" on the subaltern and the taboo for Disinformation. He's also written incisive and provocative articles in the more traditional venues of magazines and websites.

Did I mention he writes speculative fiction and horror? 3000 MPH in Every Direction at Once (2003) collects his own brand of socially significant SF and essays, his novella Northern Gothic (2001) was nominated for a Stoker Award, and his recent hybrid-horror novel Move Under Ground was also nominated for a Stoker this month and is listed on the Locus "2004 Recommended Reading" List."

Move Under Ground imagines Beat writer Jack Kerouac as a character in H.P. Lovecraft's universe, embarking on a road trip from the West Coast to the East in an attempt to stop a demonic cult of Cthulhu worshipers. Mamatas recently did this journey in reverse, leaving the New York area after a lifetime of residence for Berkeley, CA. From there he was kind enough to grant an interview via instant messenger.

Nick Mamatas: Well, one of the annoying things about being from New York is that, in one's 20s and early 30s, most of one's friends won't be from New York. Instead, they'll be from the Midwest or the South and in town to make their fortune as a poet or actor or alcoholic. Of course, most people fail at this, so after a year or four they wander back home or off to some hideous grad school.

After going through three or four cycles of this, I found myself in late 2003 with more friends in the Bay Area than I had in New York.

And I wanted a change of scene. Now I am the short-term visitor and will one day vanish.

KD2: Do you think this change will affect your writing? The New York area figures prominently in both your fiction and nonfiction.

NM: I thought it might, but it hasn't so far. Part of this is because even though I moved to California in July, I only managed to sever my last connection to the NYC area—a house I owned in Jersey City—in December. Months of paying a Bay Area rent and simultaneously a New York mortgage kept me tied to my computer and unable to explore much. I'm getting out more these days though. I did just write a nonfiction piece on how the TV show Charmed uses San Francisco as a setting (digested version: they don't use it very well).

NM: Nope. Mandy Himel, who works at Locus, keeps threatening to teach me, but I want her to buy her own car first so I can run it (rather than my roommate's) into an incredibly expensive and well-appointed Victorian by mistake. I'm really too high-strung to drive safely. It's for the good of the public I'm off the road.

KD2: That's interesting considering that Move Under Ground is in many ways a road novel.

NM: Jack Kerouac never did the driving either! I've been on long road trips, but just as the carsick passenger in the back.

KD2: You have a reputation for being extremely active online. How do you find the current state of the online SF community?

NM: Well, there are lots of online SF communities, really. Some are more interesting than others.

The online communities don't seem all that different than the offline ones—the net just made fandom "faster," not better. And of course, now anyone can get a picture of an anthropomorphic skunk with 40DD boobs sucking off a horse. You don't have to know all the obscure furry comic artists by name and address.

Anyway, back to something you said. Who says I'm "extremely active online"? I have a blog, which is certainly not a "science fiction blog," and I occasionally comment on a few bulletin boards, but that's really it.

KD2: With so many online communities out there, how do you separate the wheat from the chaff?

NM: Well, I first got online in 1989, through some of the earliest TinyMUDs. It's pretty easy to separate the wheat from the chaff when you got to see the crops grow in the first place. Ultimately, the bits that are interesting to me are the elements of community that are still growing. Lots aren't growing at all, others have matured and are now aging poorly, recycling the same anecdotes and poses they started with a decade ago.

As far as communities of any sort go, as far as I am concerned, they can only be interesting, at best. My favorite definition of community comes from Iain Boal, who defined it as follows:

Community: The maximum shibboleth. A mantra used affirmatively across the entire political and cultural landscape; NPR once interviewed a spokesman from "the organized crime community." There is an implied antithesis to "the state" (with its suggestion of power, authority and central decision), in favor of the local and the face-to-face. The results can be grotesque: the release of asylum and hospital inmates to "the community" often means, in reality, warm ventilation grates. The "communitarian" right would rather nobody noticed that the shattering of communities is a direct effect of capital moving away in obedience to the logic of the very system they endorse.

So really, whatever happens in the "online SF community" is not something one should get too riled up over.

KD2: SF survived because of the old-school community of fanzines, conventions, and writers' associations. Do you figure these new "communities" online are really that different?

NM: Is that why SF survived? I'd think it has a bit more going for it than fandom; after all, Bertelsmann and News Corp. wouldn't bother funding its continued publication if they weren't getting some sort of advantage out of it.

That said, the existence of the community is better for SF than the actually-existing-community is for SF. "Better a yellow-dog union than no union," as it were.

A writer orienting toward fandom probably wouldn't get very far in getting an audience beyond fandom. Orienting toward larger fandoms, like the Slashdot crowd that groks every Charlie Stross reference, is a better bet. Or, you know, even trying to cast a net over both the Lovecraft and Beat fiction cults at once.

KD2: Did you consider the "angle" of the audience (being able to get both Kerouac and Lovecraft fans at once) when working on Move Under Ground?

NM: Did I! That was the whole reason I did the book! Unfortunately, I seem to have failed miserably—in the Venn Diagram of life, only those who liked both Lovecraft and the Beats wanted the book, while those who only liked one or the other were put off or intimidated. That's the downfall of genre fiction in general too; readers turn to genre because they want to recapture a prior, ritual experience. Even expansive genres that depend on social trespass and the return of the repressed (horror) or that has as its core the understanding that qualitative social and material change is inevitable (SF) are bound by marketing considerations so intense that readers are trained to "expect the unexpected"—which sucks if what they expect ain't what you're selling.

So that's why my next book is about upset kids in the suburbs! Everyone likes them!

KD2: Doing background research for this interview I found stuff with your name on it going back 6-7 years. A lot of your stories (like those in 3000 MPH in Every Direction at Once) either first appeared online or were reprinted on the web at some point.

NM: Well sure, but if you search online for my stories, you're not going to really find the ones that have only appeared in print, are you? At any rate, most of that stuff is just work. I don't have a day job, so I spend a lot of time on feature articles and trying to find as many reprint opportunities as possible, to get the most bang for my buck. I'd rather get a quick acceptance and $100 from an online magazine for fiction than wait in a slush pile for a year for an only slightly larger check from a print magazine. The slicks where I've published stories and articles generally take e-subs and e-queries, and respond more quickly than digest magazines do, so I orient toward them.

KD2: There's been a lot of prophesying about the future of online publishing, and while much of it has yet to materialize, the SF community has been quicker to embrace it than "mainstream" literature. Having been online as long as you have, do you think it will ever equal or outweigh print?

NM: Certainly. The more interesting question to me is this: what will the ubiquity of digital channels do to print aesthetically? A decade ago every yutz with an M.A. in Media Arts and a copy of HTML For Morons was working on hypertexts and multimedia texts. Those don't seem to have taken off, except where the text is entirely marginal, as in an animation with captions or instructions. Right now, sudden fictions are making a bit of a comeback due to the difficulty many readers have with reading a long piece of fiction on a screen. I expect we'll see more of that, and more fiction that takes advantage of the design possibilities of the screen.

Having said all that, the book is still the revolutionary technology. Easily portable, easily reproducible, very sturdy (books can last centuries; how are the floppies from your old Apple II doing?), easy to use as an object, etc.

The book isn't going anywhere. Convergence of the page and the screen seems to be the likeliest outcome over the long term.

KD2: You refer to a lot of your nonfiction stuff as "just work," but you collect several of your essays in 3000 MPH in Every Direction at Once, so you're obviously proud of them, and rightfully so. What's the difference, for you, between fiction and nonfiction?

NM: Ah, I meant "just work" instead of "part of the online SF community." Fiction and nonfiction are essentially the same project for me, though the latter is easier to write, easier to publish, and makes a lot more money. I met Jay Lake a few weeks ago, and he mentioned that he has the ability to sit down and instantly begin composing fiction—in fact I met him at Borderlands Books, where he had just finished writing a novella in collaboration with the artist Alan Clark that week, in the store—well, I can do that too, but only with essays.

KD2: In a lot of your essays you come across as a hardboiled cynic and/or a merciless skeptic/realistic. But I was really struck by the story "Time of Day," which ends with a vision of the coming of God. Do you believe in God?

NM: No. It's just a metaphor, a la Lovecraft and his Elder Gods. Lovecraft was an atheist materialist as well, and he would have found the attempts by the "occult community" to integrate his characters into their rituals laughable. In general, looking at a story and thinking "Ah, the author must think that X is good or Y is possible!" is a project fraught with peril.

Like Loading...
© Copyright 2005 Kevin Dole 2
About Kevin Dole 2
Kevin Dole 2 is author of the surrealist SF satire Tangerinephant. He lives in Ypsilanti, MI, birthplace of Iggy Pop and the striped referee shirt.
No comments yet. Be the first!