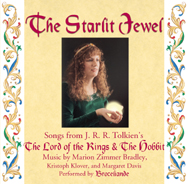 This month, I would like to profile The Starlit Jewel -- a CD of music inspired by J.R.R. Tolkien's The Lord of the Rings, and produced by Margaret Davis and Kristoph Klover.

Peggi Warner-Lalonde: I guess the obvious question is, what made you decide to do a Tolkien project?

Margaret Davis: Well, it all started due to our relationship with Marion Zimmer Bradley. Kristoph and I both knew her personally; she actually considered Kristoph her foster son. Marion had set seven of Tolkien's poems to music in 1969 and called them "The Rivendell Suite." In 1991 we were asked by Marion's secretary if we would arrange, perform, and record "The Rivendell Suite" on cassette as a birthday present for Marion. We recorded six of Marion's settings, plus three of Kristoph's, and Marion was very pleased with the results. Only two copies were ever made of that original cassette. Then, Kristoph and I got to thinking how it might be a good idea to set some more of the songs and see if we could get permission from the Tolkien Estate to release the recording commercially. Then followed four years of communications with the Estate's lawyer, until we were finally granted a limited license to produce and sell 1000 cassettes. We were forbidden to call it "The Rivendell Suite," so we titled it "The Starlit Jewel," which was released on tape in 1996. In 1999, we re-petitioned the Estate for further permission to make 2000 CDs, which was granted. "The Starlit Jewel" CD is a much superior product to the tape; in the interval between recordings we upgraded our recording equipment substantially, to a computer-based state-of-the-art system, so we remixed and remastered the original recording and rerecorded several of the songs as well.

We were always careful to set the songs in a style that we felt suited the books, and as much as possible, for instruments that are either mentioned in the books (harp, pipes/flutes, voices) or that we felt suited the feel particularly (guitar, cello, fiddle). As our acoustic music backgrounds tend towards Celtic and Medieval, that's the sort of feel one finds in the music. It is very much worth noting that although Marion wrote the music for the six pieces from The Rivendell Suite, Kristoph and I arranged them and really had a lot to do with the final form of the music. We took simple melody lines and set chords to them, arranged them for multi-voices or instruments, added solo instrumental verses and obbligatos, and in one case, turned the piece into a round. We set the elvish poems to haunting, beautiful music, the hobbit songs to more spritely tunes, and the dwarvish songs to slightly ponderous music.

Kristoph and I both grew up with The Lord of the Rings, we both read it at the age of 8 or so and our creative lives were irrevocably colored by it, so it has been a wonderful opportunity to become involved with the setting of Tolkien's words.

To the best of our knowledge, we are the only American group to have been granted official permission by the Tolkien Estate to record his words and our music, although several groups from foreign countries have also been granted permission. We know of several groups, both American and foreign, who have sought permission and been denied.

PWL: How was this project different from the music that you normally do?

MD: Our current performing projects are

Broceliande is somewhat similar to The Starlit Jewel in terms of instruments and overall sound, although the arrangements are even more complex. Avalon Rising is very different.

PWL: And what is your musical background?

MD: I studied flute, recorder, and voice classically for many years and am self-taught on Celtic harp. I have done a lot of performing of Medieval, Renaissance, and Celtic traditional music. Kristoph is classically trained on voice, but has done a lot of rock music and considers himself primarily a rock musician. He is especially influenced by the Grateful Dead.

PWL: With such diverse musical backgrounds and interests, how did the two of you first start working together?

MD: We met through a mutual friend, Marion Zimmer Bradley's daughter, with whom we decided to form a band. I was impressed by Kristoph's ability to compose, arrange, and orchestrate, and by his passion for music. He was the most consummate musician I had met at that point. We both were moved from the outset to create music that would uplift and inspire the listener. I also thought (and continue to think) that he had a really great voice and I was attracted to the full-spectrum sound of the 12-string guitar, his primary instrument when I met him. I also thought he was cute and we ended up getting married.

PWL: I know that you are well-liked by the filk crowd. Do you have a lot of involvement with the science fiction community?

MD: We do. We are fans ourselves, and so are most of our friends. We attend several science fiction conventions every year, often as musical guests.

PWL: What are some of the more unusual instruments you've used in music production?

MD: Probably the most unusual was our cat Gwen, whom Kristoph played like a bagpipe. She even meowed in key. Others -- jaw harp, Medieval harp, English horn, vielle (Medieval violin), hurdy-gurdy, a previously unknown percussion instrument made out of sheet metal. I guess those aren't that unusual. We occasionally go to extremes to get special effects -- Kristoph recently re-created the sound of horses' hooves with coconuts.

PWL: Are both of you involved in the studio production side?

MD: That's almost all Kristoph. He's the supreme high engineer. I do some arranging, as does he, but that's about it. Kristoph runs all of our considerable equipment and has the final word as to mixing, mic placement, recording, etc.

PWL: How does that differ from "musicianship," i.e. crafting the performance versus crafting the recording? Or, put another way -- how is an engineer different from a musician? Or are they?

MD: Well, Kristoph is both. And yes, they are different. Your average engineer is primarily a technician. He uses his equipment to capture and reproduce the sounds made by the musician, pretty much straight as they are, without any tweaking. In our case, Kristoph knows the ethos we are trying to express, and can shape and mold the recorded sounds to even more clearly put across our message. He has also recorded other musicians in our studio, primarily Irish and Eastern European groups, who have said that he has been particularly effective in recording them, that he has been the first engineer to truly capture their sound. I think this stems from his ability as a musician himself to feel where they're coming from.

PWL: What do you think is the appeal of The Lord of the Rings as opposed to say Harry Potter? Especially in terms of composing music for the world of Tolkien?

MD: I love both works, actually. However, to me The Lord of the Rings seems much more sweeping in scope, more of an epic. Tolkien really has succeeded at creating an entirely new world, complete with new languages and alphabets, whereas the Harry Potter books seem to describe more of a magical dimension nestled within the real world. The appeal of Tolkien's works is similar to that of myths, legends, or medieval romances (all of which I love as well), and therefore the music to a large extent should reflect that timeless, classic quality and the ability to utterly distance the reader/listener from everyday reality. I like to think that the best of the music we've written for the elven songs achieves this, although I must admit that the hobbit tunes come across more as relatively light folk music.

More About the Artists

MD: Shortly before she died, Marion Zimmer Bradley gave Kristoph and I permission to make a CD inspired by The Mists of Avalon -- the only such project actually authorized by her. It's in the future, but it will be with Broceliande.