Articles
Size / / /
Out of Your Head: The Lure of Trepanation
Tim Hardwick

It's no secret the daily grind has us spiritually starved. Health experts report that white collar suicide rates have reached an all-time high. And while statistics suggest a tendency to religiosity has a protective effect, faith is hard to manufacture. For a generation reared on personal growth and psychic development, however, alternatives abound. Some go in for crystal healing; others take up yoga classes. Not a few have recourse to drugs.

Betty Lyons drilled a hole in her head.

"My mind has been released from a long history of oblivion into a bright light of hope," reports Betty, 46, of Salt Lake City, Utah. "Silence and stillness have finally come to me after approximately 27 years of anxiety."

And Betty isn't alone in her newfound liberation. She is one member of a 14-strong pilot study group, all of whom claim to have discovered the supposed benefits of a procedure known as trepanation—or removing a cross-section of bone from the skull.

Surgeons sometimes use trepanation as a last resort on victims of acute subdural hematoma in an attempt to reduce intracranial pressure, but Betty's trauma was mental. Brain doctors might call her crazy. 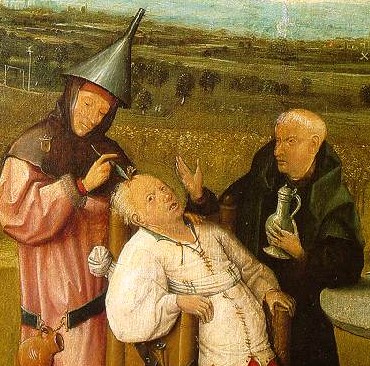 Trepanation being performed in The Stone Cutting, or The Cure of Folly, by Hieronymus Bosch, 1488-1516.

This is no passing craze, nor is it some New Age fad. Trepanation is old news. So old, in fact, that it may even hold the crown for most ancient surgical procedure. Archaeologists have unearthed bowling-grip styled skulls backdating 7,000 years, from Egyptians, Chinese, Indians, Romans, and Greeks—with evidence suggesting that even early Mesoamerican civilizations practiced some form of trepanning.

Whether this was for relieving headaches, releasing demons, or just the in-vogue ritualistic body modification is still open for debate. What's for sure is that these patients would have been fully conscious, since anesthetic hadn't quite yet been invented—although that minor detail didn't stop pioneering surgeons. Even Hippocrates, the father of modern medicine, was known to prescribe a hole in the head.

"In mythology it's known as 'opening the third eye,'" says Peter Halvorson, founder and director of the International Trepanation Advocacy Group. Halvorson is responsible for initiating the ITAG pilot study at a private Mexican clinic. "With trepanation you can willfully and deliberately accelerate your brain metabolism. You have a higher level of consciousness. You're optimistic and upbeat. You look at problems as a source of entertainment. You'll feel good your whole life." And after 30 years of living with the results of the surgery, he should know.

Halvorson grants his original inspiration to a Dutch savant and former medical student, Dr. Bart Huges. In a 1964 monograph titled "Homo Sapiens Correctus, "Dr. Huges relates an evolutionary blunder of cosmic proportions. According to his theory, the transformation of homo sapiens from backbreaking quadruped to upright man left the brain starved of blood flow and unable to sustain the cerebrum's inborn knack for heightened consciousness. In other words, blood had followed the path of least resistance thanks to the stultifying force of gravity, and man stood to suffer an acute form of brain-drain. The range of consciousness thus reduced, those parts of the cortex devoted to language and reasoning had grown to compensate for this unwitting deficiency.

Despite the gloomy prognosis, however, there was light at the end of the tunnel. You just had to keep digging.

Huges pointed to the mind of a child as the perfect example of mental equilibrium. Consider the infant's outlook—the unselfconscious wonder, the joyful spontaneity. This, he claimed, was the natural result of a brain at optimal pulsation, the conditions for which could be pinpointed at the crown of the skull—the fontanel, to be precise, the so-called soft spot enabling the head to squeeze through the birth canal unharmed.

Key to Huges's theory was that when the child aged, the soft spot sealed over, partially suffocating the membranes surrounding the brain and inhibiting what Huges lavishly termed "brainbloodvolume. " Hence the heightened perceptions, the unfettered imagination, the pure joy—all of it duly faded into adolescent oblivion as the egoistic, neurosis-ridden mind of adulthood set in. The only way to reverse the condition, he urged, was to do the work oneself—by manually reopening the skull.

Whatever the larger controversy, evidently Huges was convinced by his own logic. The real obstacle would be finding someone to perform the trepanation. None of the doctors he approached agreed to it, and Huges soon saw that drastic action would need to be taken in order to fully realize the implications of his theory. And so, armed with an electric drill, a surgeon's knife, and several syringes of anesthetic, Huges set to work on himself.

The risks were great—brain hemorrhage, meningitis, brain abscess due to infection. But according to his notes, the procedure was a total success. In liberating his brain from cranial imprisonment, Huges claimed instantaneous benefits and wasted no time in extolling the virtues of a perforated head to anybody that listened. Unfortunately for Huges, Dutch medical authorities listened only too well and put him under immediate psychiatric observation.

Meanwhile, fearing a rash of "copycat trepannists, " the Dutch government went public in condemning Huges's "bloodbrainvolume" theory as so much bone-headed claptrap. Presumably, he took all of this with tremendous aplomb, for on his release Huges continued eulogizing the merits of trepanation; indeed, it wouldn't be long before he found his first disciple.

It was 1965. Alienated and drifting, Oxford graduate Joseph Mellen wandered Ibiza in search of a much talked about mind drug called LSD, when a friend introduced him to the good Dr. Huges, fresh out of his stint in the asylum. Quickly Huges and Mellen formed a bond, and Joey soon grasped the notion of "bloodbrainvolume."

After spending some years in his native Britain trying to sell the idea to the London bohemian elite, Mellen decided to become only the second person to undergo trepanation in at least a hundred years, all in the name of improved cognitive function. As with Huges, no self-respecting doctor would touch Mellen's head with a bargepole, but rather than rushing for the nearest Black & Decker, Joey went one better by acquiring a genuine surgical trepan instrument—a corkscrew manually worked by hand and sporting a saw-teeth ringed metal spike.

Alas, the pro-tools just didn't cut it, and after a number of failed attempts (one of which landed him in the hospital) Joey grasped the drill-bit and got the result he so craved. He recounts the momentous event in his book, Bore Hole:

"This time I was not in any doubt. The drill head went at least an inch deep through the hole. A great gush of blood followed my withdrawal of the drill. In the mirror I could see the blood in the hole rising and falling with the pulsation of the brain."

Evidently it had worked, as soon after the procedure Joey rose to a state of elation and serenity which, he claims, has been with him ever since. His wife, Amanda Fielding, was so impressed with the change in him that she agreed to take the plunge herself. 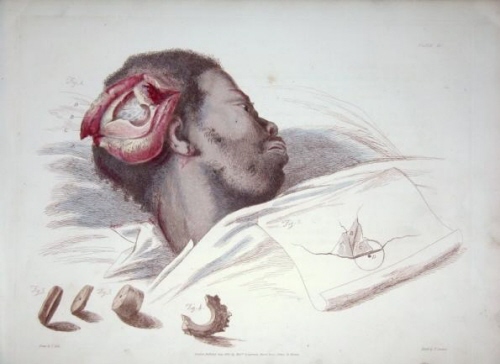 The operation of trepan, from Illustrations of the Great Operations of Surgery: Trepan, Hernia, Amputation, Aneurism and Lithotomy, by Charles Bell, 1815.

This time Joey filmed the entire affair with a video camera, and the events that unfolded gave way to quite possibly the most surreal home video ever recorded. Sparing the gory details, Amanda was left bloodied but definitely unbowed, soon after to experience "a lifting upwards, like the tide coming in, and at the same time a feeling of relaxation and silence in the head, a peace, a stopping of that voice in the head." The movie was later shown to shocked audiences, and has since become something of a myth in the pantheon of lost films.

This '60s-era DIY enthusiasm is a far cry from the clinical sobriety of the current ITAG pilot study. Bart Huges passed away in 2004, and even Halvorson no longer recommends self-trepanation, "because we're so close to being in the hands of competent surgeons." But how strong is the science behind the supposed benefits of such an invasive procedure?

"There's no evidence that under normal circumstances brain function is limited by blood flow," says Dr. Louis Sokoloff, chief clinician at the National Institute of Mental Health's Laboratory of Cerebral Metabolism. According to Sokoloff, the removal of bone from the skull might increase blood flow temporarily, but it would then reach a steady state and bring brain fluid dynamics back to baseline. Neurosurgeon Dr. Ayub Ommaya is equally unconvinced. "Blood flow is directly related to the metabolism of the brain, which is very tightly regulated." Increasing this flow in any way, he says, would simply stress the system.

Yet advocates maintain these are simply regurgitations of an inherited view, itself borne of an intellectual abdication of the worst kind: sheer prejudice. 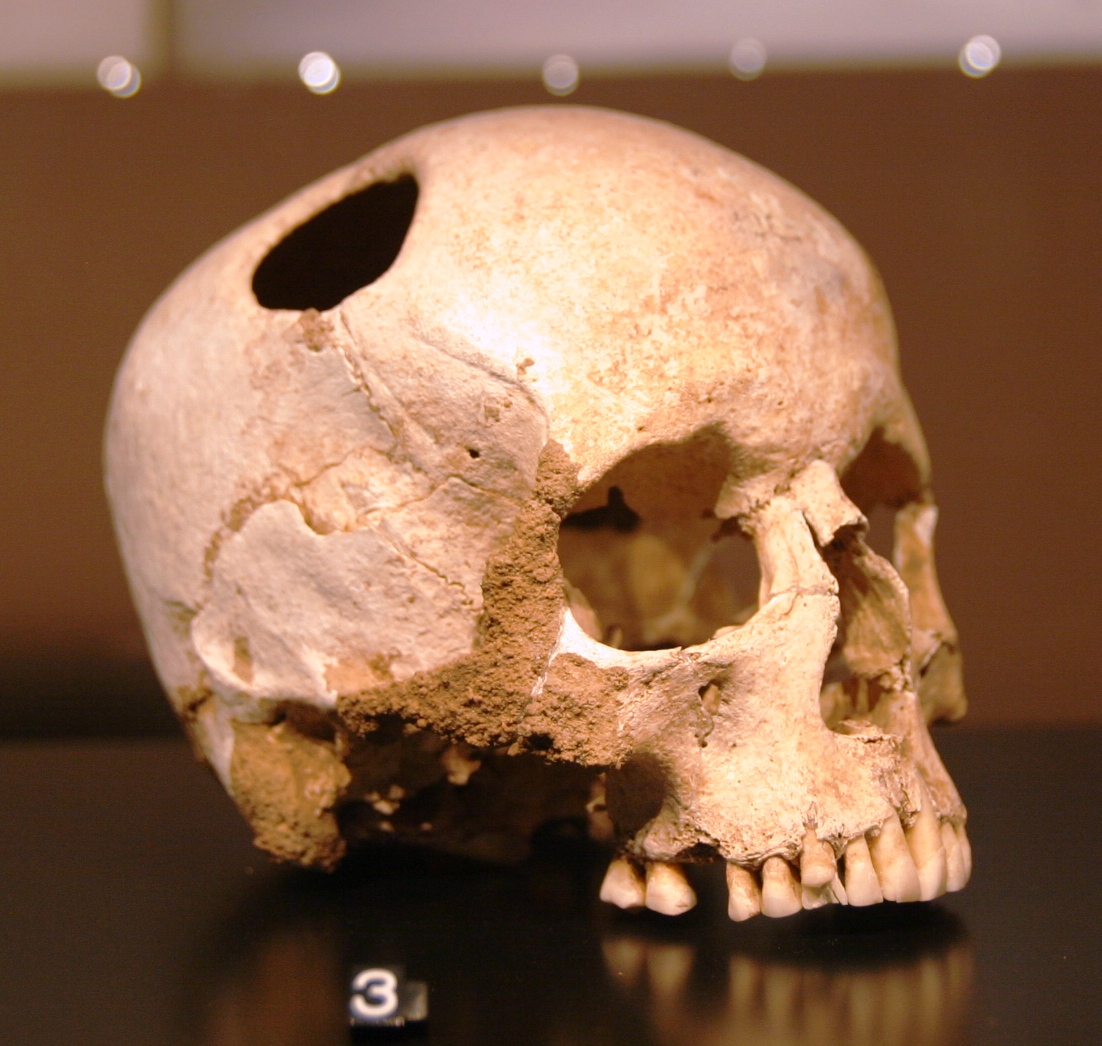 Huges claims such disregard in the medical community is a result of the longstanding stigma attached to trepanation. He points to historical records that show the procedure was often used as a treatment for insanity, which meant patients who were operated upon literally bore the mark of having been "previously insane" for the rest of their lives. Given the zeal of the modern trepanation movement, many would say the insanity continues—but new evidence is beginning to suggest otherwise.

Yuri Moskalenko is a leading scientist in cerebral circulation and president of the Sechenov Institute of Evolutionary Physiology and Biochemistry in St Petersburg, Russia. He and his colleagues have shown that normal bone hardening results in a measurable decrease in blood supply to the brain. He has even developed a new non-invasive technology for measuring intracranial pressure and volume simultaneously, giving root to the concept of "cranial compliance. " A reduction in compliance, Moskalenko believes, could be the cause of age-related dementia and "the origin of certain cases of brain pathology." But what does this have to do with trepanation?

"A hole made in the bony cavity could act as a pressure-release valve," says Robin Kennett, a neurophysiologist from the UK's Oxford Radcliffe Hospital. "This would alter the flow of fluids around the brain." Funnily enough, that's just what Moskalenko discovered when he studied people who had undergone clinical trepanation following head trauma. He found cranial compliance to be 20 percent higher than the average for the patients' age. This, he says, shows that trepanation is a viable treatment for dementia, and it could even provide a "significant" improvement in the mental functions of anyone from their mid-40s, when cranial compliance begins to deteriorate.

So when it comes to the future of trepanation, who knows? Only time, and further research, will tell us if Huges, Halvorson, Mellen, and Moskalenko have discovered a second lease of life for us all. But if recent history has taught us anything, it is that a level of layman restraint is in order. An open mind is one thing; an opened mind is quite another.

Like Loading...
© Copyright 2010 Tim Hardwick
About Tim Hardwick
Tim Hardwick is a magazine journalist and fiction writer living in Bath Spa, England. His interests trendlessly fluctuate between the odd, the even, the esoteric, and the exoteric. He is currently writing a novel about art world refugees and butterscotch Angel Delight. You can email Tim at timscatchall@gmx.com.
No comments yet. Be the first!