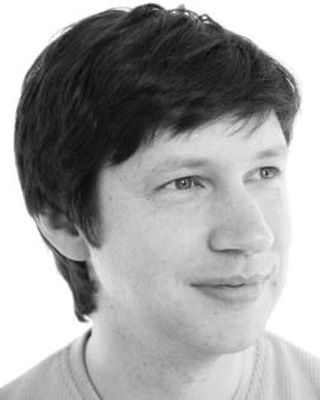 Peadar O'Guilin is the author of The Inferior

Peadar (pronounced Pah-der) O'Guilin lives in Dublin, Ireland. He works for an IT firm, and as well as unleashing his enthusiastic and satirical humor upon the world via his blog in English, he is also fluent in Irish, French, and Italian. His fantasy and science fiction short stories have appeared in numerous venues, including Black Gate magazine and an anthology celebrating the best of the iconic Weird Tales.

Peadar is an amiable, funny guy. I think it's a front, so that nobody will suspect his dark, cannibalistic tendencies. His debut novel The Inferior was published in 2007, and is a fascinating journey through a world where you must kill your neighbors, sacrifice the weak, and eat your dead to survive.

As the tale progresses, some interesting turns lead into more of a science fiction vein. It is an interesting commentary on our attitudes to food and entertainment. The Times Educational Supplement called it "a stark, dark tale, written with great energy and confidence and some arresting reflections on human nature." Don't let the Young Adult marketing put you off, this is a cracking read.

Angela Handley: The Inferior is your first novel. Tell us how it feels to see it in print and know it's on bookshelves all over the world.

Peadar O'Guilin: It is the most thrilling thing ever. Even more so when I visited Italy and saw the translation stacked up in every single shop in Milan. What's bizarre is the fact that it was far easier to find over there than in my homeland!

AH: The cannibalism theme is a little unusual. Did you have to do much research or was it a lifestyle you were already familiar with?

POG: Sadly, these days, people will treat you like a freak if you eat so much as one other human being. Even asking for "long pig" in the butcher's shop can cause quite a stir in a narrow-minded and conservative society like Modern Ireland.

More seriously, although I did quite a bit of research (how long can a person survive on a diet of pure meat? How much meat would an active hunter need per day? Hunting methods, etc.), very little made it into the book, or even needed to in the end. What I was really interested in were the necessities of survival and the hypocrisy of people who can sneer when they themselves live in more comfortable surroundings. As Robert Louis Stevenson once said: "Nothing more strongly arouses our disgust than cannibalism, yet we make the same impression on Buddhists and vegetarians, for we feed on babies, though not our own."

As you'll know by now from reading the book, I tried to give this theme a thorough workout.

AH: About the process: How long did it take to write? Did you work with an outline or just go for it? What's your work schedule like? Was there any one thing you found challenging in the writing process? Did you learn anything?

POG: I was super-disciplined for the first draft. I wrote a minimum of 1,000 words per day, despite a full-time job in IT. The whole thing was done and dusted within forty days. But my heart sank when I read through it, because I could see how awful it was, riddled with plot holes and meandering all over the place. That's what you get for not planning and I had to put the thing in a drawer for a few years.

However, when I took it out again, I discovered the other thing you get for not planning: 100,000 words of spontaneous creativity. Lots of interesting ideas and concepts. I realized that if I could wrestle them all into some kind of consistent story, I might have something worth publishing. With luck and with the help of some great friends, another two years was enough to whip the manuscript into shape.

So, there you go: forty days to write and two years to fix.

AH: Did you write it as a YA book, or was it a marketing decision? Were there any conscious changes to the manuscript to fit this market?

POG: It was mostly a marketing decision, I think.

YA needs simple language and generally doesn't like too much fluff. My story is told from the point of view of a primitive hunter. He is anything but stupid; however, his vocabulary is very limited, as is his understanding of the world around him. He is also quite a young man, which makes him an ideal YA hero. And in fact, I've had plenty of correspondence from people who say things like "my 13 year old son/daughter and I both really enjoyed it."

AH: You've visited a bunch of schools. How do you get on with that? Is it something you envisioned in being a writer? Is it self-promotion or set up by your publisher?

POG: My publisher set up the first few of these, but I wouldn't say it counts very much for self-promotion since, at least here in Ireland, the kids who have enough free time to attend a reading or a workshop, tend to be those who are too young to appreciate my book. But it actually doesn't matter. I love doing the workshops, laughing more than talking, showing off, acting out stories to demonstrate sympathetic/unsympathetic characters, and so on.

These days, there are a few libraries that know me and have invited me back on a number of occasions, so the publishers are no longer involved.

AH: What are your early influences?

POG: There was no YA for me when I was growing up, so I read a lot of Harry Harrison and Bob Shaw and Brian Aldiss. It was real adventure stuff —lots of running about the place and cool concepts that didn't need a hundred pages of the type of exposition that slowly, slowly saps the life out of a story.

From the fantasy side of things, the main influences were Tolkien and Michael Moorcock. I know they're quite far apart ideologically, but I'm not sure I knew what an ideology was back then.

AH: Did you always want to be a writer, or did you train as something else after leaving school?

POG: I always wanted to be a writer. Yes, I trained (poorly) as other things, but all the time I was scribbling something or other. In college, I wrote several plays. Most of them are duds in retrospect, but even now, there are still a few of them I'm very proud of.

AH: What sort of thing do you like to read? Which writers do you admire? What are you reading right now?

POG: I read all kinds of stuff and enjoy lots of writers for different reasons. George R. R. Martin and Neal Stephenson are probably the two authors I admire most, though.

My current read is The Snow by Adam Roberts. The Guardian once called him "the King of high-concept SF," and that's pretty close to the mark as far as I am concerned. Although, that would make Neal Stephenson the Emperor. 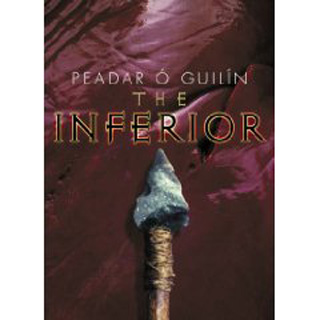 "The Times Educational Supplement called it 'a stark, dark tale, written with great energy and confidence and some arresting reflections on human nature.' "

AH: You were successful with a lot of shorts before you got a novel published. Did you see these as a proving ground for your talent? How different do you find the two formats to work in?

POG: Everyone is different, but I think writing short stories taught me a huge amount about structure, character, and plot. It's the fast turn-around time that makes the difference, as far as I am concerned. You write a story, make a mistake, somebody—a friendly fellow writer, an editor, whoever—points out the mistake and you either get to fix the story or throw it away with only a few days lost. Far better than the three years wasted in binning a failed novel.

AH: Talk to us about rejection letters.

POG: They hurt the first few times, but these days, I don't even blink when I get one. Sometimes I'll look at a story that's been rejected a dozen times and suddenly realize that it's rubbish. Too bad, but no harm done.

However, just as often, I'll find I'm still in love with whatever impulse drove me to write it in the first place. These stories, the good ones, will find a home sooner or later and usually garner more praise than those that get published on the nod.

AH: More recently you've been involved with a story about a fugitive elephant for a weekly print comic for kids. What got you involved in that gig? What differences did you experience between that and writing for plain print? Is it a format you will pursue in future?

POG: I was very lucky to get involved in comic writing and I found it to be a lovely change of pace from writing horrific events on the surface of a planet where everybody is hunting everybody else to extinction! Sneaky was great fun—a clumsy but loving elephant that delights in hiding in plain sight. She is based very strongly on somebody I know, but I won't say who that is in public.

I got involved by submitting the idea to my publisher, who was also running the comic. Sadly, the DFC (as the comic is known) is going out of business at the end of this month, but the artist (the wonderful Laura Howell) and I still got in a full story arc for Sneaky and made sure she had her fun before the end.

AH: Are there any particular aspects of writing you are particularly passionate or pedantic about?

POG: I try to avoid letting the "rules of writing" dictate what I do. There are exceptions to everything and finding them often produces the best work.

AH: What are your interests when you aren't writing? What was the last film you saw and did you like it?

POG: I like walking. I like cycling. I love watching TV box-sets, especially those made by HBO. I am addicted to certain chat forums. In fact, over Christmas, I had to drop off the net for a few weeks in order to get anything done.

The last movie I saw was The Watchmen. I didn't love it, but I liked it well enough.

AH: What writing are you working on at the moment?

POG: I am hip-deep in rewrites of my sequel to The Inferior. I have also written about 40,000 words of a near future dystopian detective novel and I am a little bit in love with that particular project.

AH: It's been a while since The Inferior was released; will the next one be out soon? Will you give us a blurb about it?

POG: I doubt it will be out very soon, but after a lot of hiccoughs, acid reflux, and cramps, it is finally looking worthy of publication. It's going to be called The Deserter and most of it will take place in the Roof where a poor savage wouldn't be of much use to anybody.

I'm not sure how honest a blurb I could give without spoilerising the first book for anybody who hasn't got around to it yet. All I will say for now is that there is running away, fighting, rebellion, unnatural disasters, and a few answers to questions that were posed in the first book too.

AH: Are there any upcoming appearances/work we can look out for?

Check out Black Gate for an excerpt from "The Evil Eater," due to appear in Issue 13.

"The Evil-Eater is hungry, Toby," the Hurani said. "If you're not evil, you have nothing to fear."

You can also read some of Peadar's work at his website.