Articles
Size / / /
The Power of Imagination: An Interview with Keith Brooke
Mike Revell

Keith Brooke has written a plethora of short stories and novels, including, impressively, two books published over the last year. The Accord, a critically-acclaimed, multi-reality-spanning adventure, was released in early 2009. Brooke's second novel, The Unlikely World of Faraway Frankie, was launched this year at Eastercon, the national British science fiction convention, on the 2nd of April.

As well as writing, he teaches at the University of Essex, England, and manages their website; he has also recently been awarded a PhD in creative writing.

Mike Revell: I think the best place to start is at the beginning. When did you start writing with the aim of getting published? 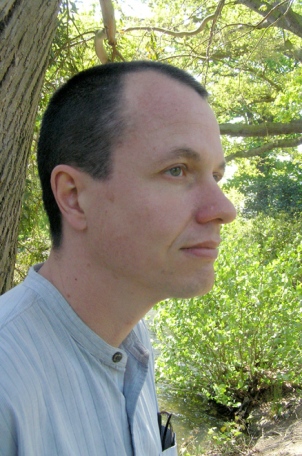 Keith Brooke, author of Genetopia and The Accord.

Keith Brooke: At the end of my first year at university. With a tax rebate I went out and bought a typewriter, and then at the start of the long summer break I sat down and wrote a short story called "The Fifth Freedom." I submitted it to a few professional markets—the only two I can remember are the Writers of the Future contest, where it made it through at least a couple of rounds of judging, and Interzone, where one of the editors sent me a very nice encouraging rejection saying that the story was well done but a bit preachy. The story actually sold to a small magazine called Dream, which was publishing early stories by people like Stephen Baxter, Peter Hamilton, and Ian Whates, among others.

MR: What made starting with short fiction so appealing?

KB: At first it was a fairly rational judgement on my part. I figured that when I was so new to serious writing the learning curve would be quite steep: so if I wrote, say, twelve chapters of a novel, the last couple of chapters would be way better than the first few but a few half-decent chapters at the end don't rescue a bad novel; write twelve short stories and if I managed to write a couple of half-decent ones by the end of that then I might actually get them published. I pretty quickly realised that I actually love short stories—they're perfect for lots of SF ideas where you can follow a single idea through to its logical conclusion, you can try different techniques and styles, you can have fun.

MR: Is the writing process ever a surprise to you? When you were writing "Passion Play," for example, did you realise that you were developing an idea and a world of such depth that it would inspire the novel Genetopia?

KB: When I'm writing a short story the ending never really surprises me—I usually prefer to know exactly where a story is heading before I sit down to write it. The bigger picture does sometimes surprise me, though. As you say, "Passion Play" turned into a novel, albeit fifteen years later. With that one as soon as I finished the short story I knew I would have to return to write more stories in that setting, and very probably a novel; I did that with The Accord, too—the short story of the same name was another where I realised there was a much bigger story to be written, and as soon as I finished the story I started accumulating notes for the full novel. Usually that kind of thing only emerges during the writing—you get a sense of a much bigger backdrop to be explored.

MR: How would you describe The Unlikely World of Faraway Frankie?

KB: It's the story of a teenager who deals with bullying and other traumas by wandering off into flights of fancy, re-imagining the world around him; until one day, elements of his imagined world start to intrude into the real world and it all starts to get complicated. Adam Roberts has written a lovely foreword for the book, in which he says, among other things: "This, I'd say, is the hardest writerly discipline of all to master: to write a book that surpasses the tendency to categorise literature into 'young adult' and 'old adult' categories. Keith Brooke's The Unlikely World of Faraway Frankie is a masterclass in how to transcend those sorts of labels."

From a personal perspective, I think it's one of the best things I've written, and the story moves me hugely; when I was working on the final copyedit I found myself getting really wrapped up in it in a way I never have with anything else I've written.

MR: I know a lot of "The Accord" the story made it into The Accord the novel. How about Frankie? What was the development process from "Beside the Sea" like?

KB: It was all entirely subconscious. I wrote "Beside the Sea" something like 15 years before Frankie, and by the time I wrote the novel the earlier short story had gone from my mind. It was only when Eric Brown read a draft of the novel and commented on the connection that I went back to the short story and saw the links—that story even had a protagonist called Frankie!

The short story was set in a post-holocaust world where a fantastical seaside town was held together by the belief of a few key people; the novel is a contemporary story where a fantastical seaside town comes into existence through the belief of one person. But other than that, the two diverge: the characters and plots are quite different. I think it does reflect a long-lasting fascination with seaside towns (I grew up in one, and always loved the fact that I saw it from a different perspective to that of the day-trippers and holidaymakers), and also with that transition between youth and adulthood: a lot of my teen writing is really adult fiction for kids, and a lot of my adult writing has that kids' fascination with the workings of the world that's central to so much SF and fantasy.

MR: If the imagination knows no bounds, was it difficult to write about it here, or was it just fun exploring potentially limitless possibilities?

KB: It was actually a lot of fun, and there's a subtle difference between Frankie's and my perspective: for him, his imagination does know no bounds for much of the story, but as the author I had to have my own rules, a framework for Frankie's story. Frankie was exploring and discovering his new fantastical world, but I understood why it was like it was, so I was able to pull the strings. I did really enjoy it, and, as I've said, I'm very proud of the result.

MR: Between teaching and writing, do you get much time to read for pleasure? Are there any books you've read recently that you're particularly excited about?

KB: Not nearly enough time. I accumulate books that I'll read one day, no really I will. I'm currently reading Bill Bryson's Down Under for pleasure—I bought it after a trip to Sydney a couple of months ago, and I'm thoroughly enjoying it. I'd love to get to Jeff VanderMeer's Finch, or Jim Kelly and John Kessel's alternative SF history anthology pretty soon. But no, most of my reading at present is work-related—I do still enjoy it, though.

MR: Who would you say are your principle influences?

KB: Ooh, so many, and you'd probably get a different answer if you asked me again tomorrow. I'm not sure exactly how any of these influences actually come out in my work, but writers I hugely admire include Graham Greene, Ian McEwan, Robert Silverberg, William Boyd, John Fowles. From this you'll see that most of my reading tends to be outside the boundaries of SF—not sure why, really, because I do love good SF, and I've devoted a large part of my life to the genre!

MR: What advice would you give to the aspiring writer?

KB: To work like hell at it. You have to push yourself every time you sit down to write; you should make everything you produce better than the last thing; you need to be your own toughest critic and you need to learn from the things you're still not getting right. And you have to be stubborn as hell. Finish your first story and start the next; finish your first novel and start the next; keep sending them out. When you do the sums it's hugely improbable that any writer will emerge from the slush pile, but they do, and the only way you can improve your chances is to write the best thing you can write, present it professionally, and keep submitting so that you're giving yourself the chance.

MR: Thanks for your time, Keith. And congratulations on The Unlikely World of Faraway Frankie. It must have been great to launch it at Eastercon?

KB: It was lovely. Eastercon is always a time of reunion with old friends, so it was good to get together at the launch party. Free drinks, and I could make them buy my book—what more could I ask for?

Like Loading...
© Copyright 2010 Mike Revell
About Mike Revell
Mike Revell is a writer and journalist based near Cambridge, England. He enjoys writing fiction, especially when it's weird, or involves old things being done in a new way. You can learn more about him at his website: www.mikerevell.com.
No comments yet. Be the first!