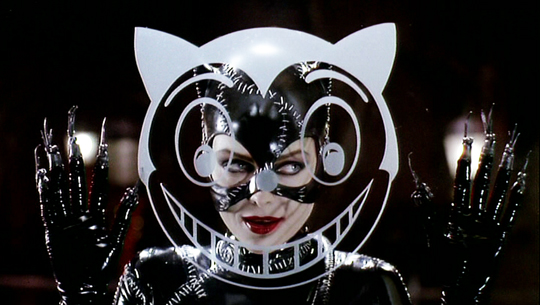 The origin story is a pretty tough gig.

Not for lack of trying; comic book heroes have long been a fixture of the cultural imagination, and in the last decade in particular there's been a boom in franchises and reboots. A 21st-century reboot trilogy resurrected the Dark Knight from the Technicolor shambles of Batman and Robin; The Amazing Spiderman reboot turnaround happened so quickly that contracts must have been signed while Tobey Maguire was still making the last of his greasy hamfaces in Spiderman 3. And yes, there are three of each; these days, it seems, it takes a trilogy to give your superhero the arc Gotham deserves.

By contrast, the rise and fall of Catwoman in Batman Returns is an origin story that reaches full narrative closure in a single film—and in an ensemble piece, no less. (Burton's Batmans were less focused on the Caped Crusader than on the world in which such a man got away with being who he was, which meant his villains got near-equal screen time, but with three to worry about, every moment counted.)

Perhaps this worked in her favor; what remains onscreen is the essence of the Catwoman mythos, framed in a standout aesthetic, and hinting at the deeper psychological resonance of the character. Rare is the comic book hero who has gotten an origin this focused; this Catwoman might actually be the superhero origin story in its purest form.

In the quasi-noir world of Burton's Gotham City, we're introduced to Selina Kyle when she's taken hostage by one of Penguin's henchmen, and rescued by Batman. The situation would be a reenactment of a thousand damsel rescues, except that Selina Kyle is a damsel only on the surface: once Batman has heroed off in search of other evildoers, Selina picks up the taser her unconscious captor used—and gives the guy ten thousand volts. It's a short, sharp moment that both sets up Selina as a character and illustrates the movie's intention to dismantle—or at least examine—the damsel/seductress, secretary/dominatrix dichotomies through her struggle for an identity that feels wholly hers, without being defined by one of the many men attempting to exert influence on her.

One of the most prominent is her boss, Max Shreck, who delights in belittling her. As damsel and secretary ("assistant," she offers to no avail), Selina has no backbone at the office, and nothing at home but a Pepto-pink apartment stuffed to the gills with markers of the youthful feminine—stuffed animals, a dollhouse, a sea of pastels. She's so frustrated by this accidental identity that she hardly seems to care about her return trip to the office after hours. Unfortunately exercising critical thinking while she's there, she stumbles on Shreck's evil plan, admits it, and gets defenestrated for her trouble.

This is the literal and metaphorical death of Selina the Damsel, the first identity she sheds, and the one whose failures of initiative will haunt all her other incarnations. When, cat-swarmed, she opens her eyes, that woman is gone. What happens next is her burial, and the birth of Catwoman.

This origin scene is condensed, and potent—and when it comes to cinema's superhero origins, perhaps no other has gotten one quite so subversive, or effective, as the cathartic aesthetic and psychological rebirth that severely inhibits the resale value of her apartment.

There's some unavoidable, powerful subtext to the destruction of the infantilized, naïve feminine that the resurrected Selina visits on her personal space. The stuffed animals go in the garbage disposal; the pastel wardrobe and dollhouse get sprayed to death with black paint. And though the vinyl-raincoat-into-catsuit has obviously sexual overtones, there's a more straightforward narrative power to the PTSD fugue state in which Selina destroys and refashions herself: it's an example of a woman rejecting one femininity and constructing the trappings another, for her own sake. (Where else in the superhero-movie canon do we see sewing as a gesture of rebellion?) And the key moment comes not when she slinks into silhouetted view, but when Selina examines an accessory of the feminine as a weapon for the first time. Just out of frame is the neon Hello There sign she's decisively smashed, transforming it into the final signal of change—the immortal proclamation, HELL HERE.

It's all the more interesting a statement when it's taken into account that after the death of the retiring damsel, the identity of Catwoman sits relatively easily on Selina's shoulders. The overtly sexual presentation combined with ruthless violence seem, in fact, to be reinvigorating, and she takes very quickly to the role of judgey savior inhabited by so many comic book heroes before her. Her ten-thousand-volt wicked streak manifests in this new guise as the dramatic Molotov she makes out of Shreck's flagship store.

This particularly explosive piece of vandalism brings her to the attention of the Penguin, for whom Catwoman pulls out every femme fatale stop ever invented, and a few new ones (Batman Returns means never having to call bird-eating a euphemism). But while her dealings with him highlight her talent for strategy, it's the far reaches of the Dominatrix identity with which she seems uncomfortable—the theatrics it requires offer her no narrative payoff and struggle against the Penguin's expectations of sexual availability (something which, for her, the feminine trappings do not at all indicate, and an expectation she sharply refutes). It's an alliance and identity she abandons.

It's just as well; by now, having tussled with Batman and lost, Selina's tragic origin arc has reached the morally grey second act, in which negotiating a mask and a plainclothes identity is tricky stuff. This comes in the form of Bruce Wayne, whose presence in Selina's life looks remarkably like the traditional love interest in a superhero origin story, right down to slightly awkward pining, convenient emotional support, and an abortive date, during which they both try to literally hide their battle scars from one another. It's here that Selina demonstrates a wicked sense of humor that defies all the archetypes she's skipped through, and comes closest to revealing the confident, candid, and complex woman that has always been present, and has the potential to be the identity Selina likes best (telling Alfred that Bruce "makes me feel the way I hope I really am").

But of course, part of the tragedy of Catwoman is, among other things, that in order for her to strip away the dichotomies and archetypes that male influence exacts on her, she must reject Bruce as wholly as she has Shreck and the Penguin, and that this Selina, too, is fated to disappear. With more sympathy than often offered to women in comic book films, Burton presents these wrenching choices—Selina's quest to break free of constraints and expectations and achieve revenge means she must also leave behind the man, and identity, with whom she feels most herself.

The final battle (which is not between Selina and Shreck, or Catwoman and Batman, but between Selina and Catwoman) is technically fought underground in the Penguin's sewer stronghold. However, the true conflict happens aboveground, as Bruce and Selina realize one another's true identities, at a masked ball at which they're the only two without masks. It's a key narrative moment, and becomes the proving ground of the struggle for Selina to claim an identity, against Bruce's pressure for her to become the Selina he prefers (and she prefers), and her own need to avenge herself against the man who killed her and whose power over the city has only grown in his partnership with the Penguin. The moment of drama, therefore, isn't in any particular action scene that follows, but in the fact that Catwoman is present at all, and that Bruce literally and figuratively unmasks her.

Given that this is the battle after the great point of crisis, and her tragic arc is coming to a close, the Selina of this moment is, therefore, her identity in its most decisive incarnation. And now, this ultimate Selina is more Catwoman than the audience (or, visibly, Bruce) might have expected. When offered sanctuary, she chooses instead to get her revenge against Max Shreck at what's seemingly the cost of her own life—and the last of her identity as Selina Kyle—ten thousand volts at a time.

However, it's hard to keep a good archetype down, and so strong is the impression Selina leaves on the film that the final image of the film isn't Batman at all. He's symbolically present, as the Bat-signal flares to life in the night sky, but it's not Batman who answers the call. Instead, a familiar silhouette appears—Catwoman, the curtain having fallen on her tragedy, looking at the call to action and ready to take on a new identity: hero.

There have been incarnations of Catwoman before this one, and since; there have been other comic book women who have strapped on their superpowers and superegos and waded into the fray. However, Burton's Catwoman was more than antagonist, or even protagonist—she was a deconstruction of what it means to be a woman in the world of comic-book heroes, and an examination of the costs of seeking one's own identity at all costs. What makes this particularly powerful is that the iconic imagery (skintight catsuit, red lips) is given depth by the choices that fashioned it, and her story is given the same narrative space as the hero's, her tragedy given equal emotional weight. That her struggle is Hell Here, we understand; that she will triumph, we don't doubt.