As a writer and reader, I’m always searching for the alternative history of my lineage. I imagine them as fragments in the path I wasn’t guided down, the one which I still could and will walk down. Coming into a relationship with other queer Asian American speculative poets like Margaret Rhee has meant discovering another entry point—a writing and reading which has been there all along and which I was missing.
—Ching-In Chen

“SF is the only genre of literature in which it’s possible for a writer to explore the question of what this world would be like if you could get rid of [X], where [X] is filled in with any of the multitude of real world facts that constrain and oppress women.”
—Suzette Haden Elgin

Feminist writers such as Elgin and our recently passed Ursula K. Le Guin may be known for their fiction, but they were poets as well. As feminists, we cannot underestimate poetry as a tool. Poets such as Audre Lorde, Adrienne Rich, and Gloria Anzaldua have written poetry that is taught still in feminist classrooms as standard curriculum. I also think of poets such as Ching-In Chen, Christopher Soto, and Duriel Harris, who offer us new political visions in our contemporary moment. Poetry has always been an important tool of the feminist movement, shedding needed light on the creative visions of cis women, nonbinary people, and transgender poets. Science fiction poetry offers an inherent intersectionality as a genre that includes the fantastic such as aliens, monsters, robots, and magic, along with political interventions of poetry.

In my recently published poetry collection, Love, Robot, I offer an imaginary world where robots and humans fall in and out of love. While my other poetry and academic writing draws explicitly from identity such as race, gender, and sexuality, my robot poems are seemingly devoid of race. However, in many ways, I consider my science fiction poems addressing gender, race, and sexuality, even if not overtly. I found science fiction was a powerful tool to write about questions of intimacy, desire, and difference. Through writing my collection, I also realized feminism helped me find my way to science fiction in a gradual way. I have always been interested in science fiction; however, due to my own identity markers, science fiction didn't feel like a home. I never felt writing about these imaginative far-off places or creating my own worlds was a viable option for me. As I wrote more science fiction poetry, I began to learn more about the feminist genealogies and community which secured my interests and affiliation. While I didn't earnestly seek feminist science fiction poetry, it seemed to find me.

I was already finishing up the final revisions of Love, Robot when I began teaching at the University of Oregon in the Gender and Women's Studies department. In a serendipitous way, the campus held the archives of James Tiptree Jr. the pseudonym of Alice Bradley Sheldon, who by necessity, because of her gender, wrote under a male name in the male-dominated field of science fiction. That year, my department hosted the James Tiptree Jr. Symposium on the intersection of science fiction and feminism. The symposium would honor science fiction author and poet Ursula K. Le Guin. Magically, I was tasked to drive the late Ms. Le Guin to and from the symposium. As one would expect, Le Guin was incredibly illuminating, charming, and magical in every way. Meeting Le Guin, and learning further of her science fiction poetry transformed the way I felt about science fiction.

Like Le Guin's poetry and Elgin's founding of the SFPA, feminism has been central in SF poetry. For example, feminist SF poetry collections such as The Moment of Change: An Anthology of Feminist Speculative Poetry, edited by Rose Lemberg and published by feminist SF Aqueduct Press, offer new visions of the genre. Additionally, Goblin Fruit: A Quarterly Journal of Fantastical Poetry, named after Christina Rosetti's 1930's feminist science fiction poem “Goblin Market,” is a SF poetry online journal edited by Amal El-Mohtar and Caitlyn Paxson.

However, for many science fiction poets, the genre was not an immediate find, and instead a gradual discovery by way of feminism opening the door. My experience was certainly a serendipitous and gradual discovery. While writing is often a solidary activity, it is collective too, and I decided to ask other feminist poets to understand this shared experience. Poets such as Jeannine Hall Gailey, Jenna Le, Susan Rosen Kindred, and Nisi Shawl have been formative poets for me, and they agreed to share their reflections through a feminist exchange of questions and answers. These inspiring poets share their stories of coming into science fiction poetry through feminism. For Jeannine Hall Gailey, two-time winner of the Elgin award and author of The Robot Scientist's Daughter, and other collections, a feminist was one of her early mentors: "I have to say that reading Elgin's biography originally reminded me of one of my early mentors, Colleen J. McElroy, who was a professor with a Ph.D. in Ethnolinguistics (Elgin was a linguist), and who often delved into mythology in her own books of poetry. She was also an outspoken feminist and gave me much needed advice when I first started taking my life as a poet more seriously. I think she is one of the reasons I felt strong enough to write the first book I did."

Gailey and others echo my experience of a gradual discovery of science fiction poetry as a genre. Sally Rosen Kindred of Book of Asters shares, "The poetry I wrote was feminist, but it almost never occurred to me to write science fiction poetry. I'm not sure I knew that existed." However, as she discovered science fiction journals online, and was writing poems about the " apocalypse and magic and fairy tales and outer space," she shares, "I realized I could be a part of it as a writer as well as a reader." For Gailey, she says her first collection, Becoming the Villainess, was a story of female empowerment through a science fiction lens: "I didn't find out there was a science fiction poetry community until after I published my first book!" However, the existence of science fiction poetry offers a connection to feminism. Jenna Le, author of the Elgin second-place winner, A History of the Cetacean American Diaspora

shares, "I definitely identify as a feminist...In my work, I especially enjoy centering women characters who have been a bit roughed up by their life experiences: proudly un-beautiful, shamelessly strange women who embrace their 'hunger, rebellion, and rage' (to repurpose Matthew Arnold’s backhanded phrase), thwarting societal expectations that women be passive, lovely, and innocent."

Nisi Shawl, author of the science fiction Nebula-nominated Everfair, and one of the founders of the Carl Brandon Society, which aims to increase racial and ethnic diversity. Shawl says, "Because science fiction poetry is itself intersectional by nature, I'd think there'd be a great affinity for those sorts of issues in this format. Also, because poetry's directness and power of impact, it should have a huge effect on how inclusivity and intersectionalities of all sorts are represented and perceived." Shawl's powerful poetry and science fiction have long addressed issues of race and racism in science fiction. In particular, her poem in A Moment of Change, "Transbluency: An Antiprojection Chant" ends with an incredible line about color: "Until I am no longer your shadow, no more the rag you clean with. Until I am my own new color, my own whole cloth." As Shawl writes, "That poem, 'Transbluency,' came out of my very real experience in the 70s and early 80s; so many encounters threw me because the men and whites and white men I interacted with assumed entirely different things about me than I knew to be true. It got very tiring to have jerks condescendingly explain the definition of ichthyology to me, for example."

In 2014, the late Le Guin was awarded the National Book Foundation's Medal for Distinguished Contribution to American Letters. In her acceptance speech, Le Guin powerfully spoke about justice, as well as the treatment of science fiction writers in the awards system. Le Guin attests: "And I rejoice at accepting it for, and sharing it with, all the writers who were excluded from literature for so long, my fellow authors of fantasy and science fiction—writers of the imagination, who for the last 50 years watched the beautiful awards go to the so-called realists." In her speech, Le Guin speaks about the politics of literary awards that have largely not recognized science fiction writers. Of course, science fiction has its own system of recognition—the Nebulas, for example, and the Science Fiction Poetry Association's Elgin Award. However, the demarcation between science fiction and "realists" speaks to a marginality within national  literary awards. While intersectional by nature, this very intersection also may keep science fiction poetry at the margins. As Gailey observes, "I want to see a speculative book of poetry win the same literary honors as 'normal' writing."

Yet, it is the lack of recognition in mainstream literature that shapes the community oriented and generous spirit that characterizes the science fiction poetry community. As Kindred attests, "I've been consistently impressed by the lack of hierarchy when I encounter science fiction poets…Perhaps in part because the academic system dominates the genre less, there is mostly shared passion for the work, and an authentic desire to lift each other up. Jeannine Hall Gailey is a great example of this attitude; she is an enormously talented, visionary poet, and also a terrific literary community-builder." I have to echo Kindred's observations on Jeannine. I met Kindred after Gailey invited me to be on a science fiction women's poetry panel at AWP, which included Nancy Hightower and Lesley Wheeler. Kindred, Gailey, and others shared a sense of solidarity with their writing that I appreciated and believed in. I met Shawl at the Tiptree Symposium at UO, and Le through social media when both of our collections were finalists for the Elgin Award last year. I have found the feminist SF community to be one that is generous, supportive, radical, non-hierarchical, and inspiring.

The Science Fiction Poetry Association founded by Elgin still reverberates with feminism, and I wondered why. I reached out to poet Bryan Thao Worra as the current Science Fiction Poetry Association President for his thoughts on feminism and women. His vision includes women in the leadership process as well, and he shares, "I've tried to be proactive and clear on my support of women in the leadership and decision-making processes of the organization, consulting both officers and community members at large around the world." The leadership of Worra and others signals the commitment of the SFPA to foster marginalized voices in science fiction poetry.

While I am not certain what the future of science fiction poetry looks like, the current visions, writing, and community offer fantastic possibilities. As Shawl writes, "It will go on. It will perhaps come more and more to depend on live performance and audience interaction as part of magic’s resurgence." In many ways, every poem can be considered mythic, but science fiction poetry may have magical powers. As Shawl reflects on her poem "Transbluency," "I wrote the poem as a cleansing tool, a healing chant."

As Elgin writes, "If you could get rid of [X], where [X] is filled in with any of the multitude of real world facts that constrain and oppress women,” and I think often of the ways women and nonbinary people have utilized poetry and science fiction in order to heal, transform, and change. Of remaking that X. Maybe the X is like a cross-stitch, that traditional woman-centered art. Sew x-shaped stitches onto your fabric surface to remap a new picture. 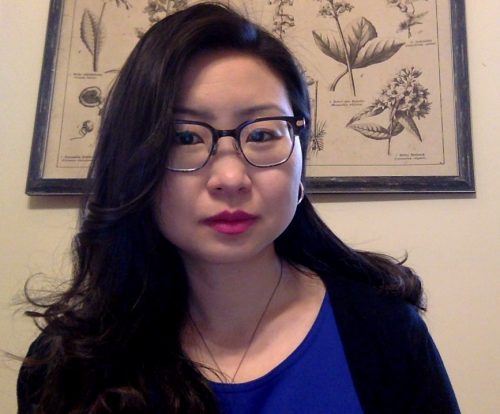