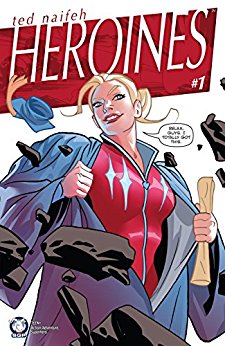 There’s something really nineties about Ted Naifeh’s superhero comic Heroines. Maybe it’s the way it dances around queer issues rather than openly acknowledging them. Maybe it’s the “Girl Power!” rhetoric coming from a publishing company with an all-male masthead. Maybe it’s the main character’s pigtails, baby-tees, and flared jeans. Whatever it is, it makes reading the series an odd experience, since you’re constantly trying to pin down why exactly it feels so dated. Yet, despite the tonal dissonance, there are also interesting characters and good worldbuilding. There’s also enough foreshadowing to imply that maybe Naifeh is setting up these outdated conventions so he can knock them down later.

The story starts with our main heroine, Marcy Madison, giving her valedictorian speech at Columbia University. She starts by saying that a lot of people in the audience probably think that she was chosen as valedictorian because she’s wealthy and blonde. Marcy is at least self-aware enough to admit that this might be true, but she doesn’t offer up any counterpoint as to why she does in fact deserve the honor. Through her speech we learn that Marcy has a burning desire to make the world a better place. She gets her chance almost immediately when a fight between a giant robot and a superhero team spills over onto her campus.  Marcy uses her superpowers (she can create bright, blinding flashes of light) to save the day—and impresses one of the superheroes, Bolt.

Bolt invites Marcy over to The New Sentrymen’s headquarters. We spend most of the first issue meeting the other members of the team and getting a tour of the HQ. Marcy thinks this is all leading up to them offering her a spot on the team, but it turns out Bolt was just showing her around to impress her. Bolt’s reasons for not letting Marcy join the team run the gauntlet of sexist reasoning, but basically boil down to women causing too much drama. Marcy storms off and declares that she’s going to start her own team, one that’s all women.

Each issue of Heroines is only fifteen pages and most of the time the story moves at a brisk pace—so it feels a little odd that we spend so much time with The New Sentrymen in issue one when they are, on the whole, minor characters in Marcy’s story.  Issue two starts off with Marcy trying to find members for her superheroine team. Sadly, the only person who replies to her Craigslist ad is a flakey new age hippie who puts yoga class ahead of fighting evil. But someone else who saw the ad is Raven, a former member of The New Sentrymen who was kicked out after she divorced one of the main members, a short-tempered Batman-analog called Stormcrow.

Raven is the opposite of Marcy in that she is butch, blunt, and world-weary. In order to show Marcy what the world is really like, she takes Marcy along on a mission to a poor neighbourhood. Together Raven and Marcy rescue a sex worker who’s been beaten, bound, and stuffed into a duffel bag. It’s really jarring to see such a brutal scene in what is otherwise a pretty peppy superhero series. What makes it more even more jarring is how the series tries to make light of it. When Marcy, after removing the duct tape from the woman’s mouth, asks her if she’s all right, the woman replies, “What kinda fool question is that? I’m in a damn duffel bag” (Issue #2, p. 11). It seems like the narrative is more concerned with taking Marcy to task than it is with acknowledging how disturbing the situation is.

It’s heavily implied that the sex worker (whose name is—ugh —Tinkle) would have been killed by her pimp if Raven and Marcy hadn’t rescued her in time. Raven gives the pimp an off-page beating, then sits both Tinkle and the pimp down for a pay dispute discussion. It seems ridiculous and a bit gross to have the characters “talk it out” after everything that has come before—and with the uneven power imbalance clearly on display between Tinkle and the pimp, Elmo. The point of this issue is to show how naïve Marcy is, but it’s Raven who comes off as the simplistic one. When Marcy asks if Raven feels complicit in Tinkle’s abuse, Raven replies that at least Tinkle’s making more money than she would at a fast food joint. This might be true, but it also hand-waves away the violence sex workers face. The fact that Marcy doesn’t voice a counter-argument to Raven’s points makes it seem as though we are supposed to view Raven as being in the right.

If I were reading Heroines on my own time and not for review, I’d probably have stopped after that second issue. Aside from the tonally out-of-left-field grittiness, it just didn’t feel like the series had anything new to say. In one panel Marcy and Raven talk about Raven’s marriage to Stormcrow, and the older woman talks about how wearing masks made the sex hotter. Marcy acts like this is a shocking admission, but this idea was an old one when Watchmen touched on it in 1986. Heck, comics have been exploring the connection between superheroes and BDSM since before Wonder Woman walked the earth. It’s hardly a shocking angle to take in 2018. 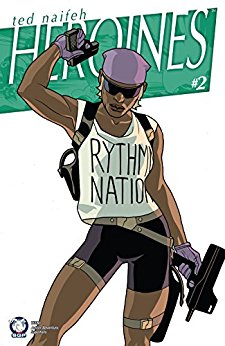 I am glad I kept reading though, as issues three and four were a vast improvement. Marcy continues to assemble her team, eventually drawing together the reluctant Raven, former supervillain Jones, and mysterious assassin Shataru. Each of these four women bring something new to the series and bounce off each other in interesting ways (Shataru less so than the others, but there is at least potential there). My favourite is Jones, whose character design is basically a female version of Marvel’s Kingpin. She tells Marcy that she’s tired of being a baddie and wants to be a good guy; Raven tells Marcy that Jones just wants to get in Marcy’s pants. Maybe that’s true, but unlike sarcastic, critical Raven, Jones is also consistently quietly supportive of Marcy.

Jones’s attraction to Marcy is largely played off as a joke, with Marcy once again being the naïve idiot who can’t see Jones’s ulterior motive. It’s really odd how the series pussy-foots around Jones’s sexuality. “Don’t know if you noticed, but Jones’s kinda . . . uh, masculine,” Raven says to Marcy in issue three (p. 12). My own read on Raven is that she’s squeamish about Jones’s sexuality because she’s struggling with her own attraction to Marcy. Only time will tell if this theory proves canon or not. This early in the series it’s hard to say if Naifeh is laying the groundwork for Raven being queer, but that fact that Jones’s sexuality is largely treated as a joke doesn’t bode well.

In the fourth issue we actually get to see the team in action when Marcy stumbles across a bank robbery. Everyone on the team responds to her text message (well, except for the flakey yoga enthusiast) and we finally get to see their different skill sets in action. Each character has different strengths and I especially like how, despite having more defensive powers than the other women, Marcy is still seen as the leader. When the heroines successfully save the day, it is such a feel-good moment that it made me think “Hey, maybe this can work”—“this” being both Marcy’s team and the series itself.

One missed opportunity, however, is that the villain they fight in the bank is very two-dimensional. Thundergirl is a former New Sentrymen member who was kicked off the team for attacking American troops. Despite this she seems to have a following (Marcy even has a poster of her in her kitchen). But when she shows up at the bank she seems like any other super-powered bank robber. What happened to the idealistic anti-hero alluded to in earlier issues?

Despite my disappointment in Thundergirl’s portrayal, I’m sure we haven’t seen the last of her. Naifeh wouldn’t have included all the detail about her checkered past if he wasn’t going to do something with it down the road. Despite the short page count of each issue, there is an impressive amount of worldbuilding within the series’ pages. Naifeh is such a seasoned storyteller that even if I am not interested in seeing more of The New Sentrymen (I am personally bored with Justice League/Avengers analogs), I at least believe that he spent so much time with them for a reason. It’s also why I’m still hopeful for better queer representation in this comic and that we'll get some pay-off on Raven’s feelings towards Marcy.

In her short appearance, Thundergirl does, however, make an interesting point as the police take her away: “They may be women, but they’re still working for the man” (issue #4, p. 11). Right on cue, a hip young entrepreneur, Jason Proffit, shows up at Marcy’s door, offering to fund her team. Who is this guy, and what does he get out of bankrolling superhero outfits like Marcy’s and The New Sentrymen?

It’s an interesting cliff-hanger and hints at a wider conspiracy. It’s also a neat meta-commentary, in that this might be a comic featuring women in the main roles but it’s still created by a man. Naifeh has been working in comics for decades and is surely aware of the irony. Of course, men can write interesting female characters— Naifeh himself created the Courtney Crumrin series, a comic book featuring a kick-ass, surly, and awesome little girl as its protagonist. But it’s hard to recommend Heroines when there are so many really good comics being written and drawn by female and nonbinary creators. It would take forever to list them all, but in the tights-and-cape corner of the world there’s Hope Larson on Batgirl and G. Willow Wilson on Ms. Marvel, just to name a couple.

One reason to check out Heroines, though, is Ted Naifeh’s artwork. His use of thick black lines and solid blocks of colour gives his work a nice art deco vibe by way of Mike Mignola. Sometimes I wish there were more detail in the backgrounds and more of a varied colour palate, but the minimalistic approach does at least match up with the issues being smooth, quick reads. His characters have distinct, revealing body language: Jones is near indestructible and her relaxed body language shows that she knows it; mysterious assassin Shataru on the other hand is often hunched over, curled inward, her body coiled until she needs to lash out. Though we don’t get to spend a lot of time with the characters, we learn a lot about them just from seeing how they sit at a kitchen table.

While the plot of Heroines on the whole is underwhelming, I do like the characters a lot and would be interested in seeing what happens to them next. Okay, what I’m really interested in is seeing Raven and Marcy get together. Or Jones and Marcy. Basically, to paraphrase a line from another girl power series, my continuing interest in Heroines is contingent on the (gay) subtext rapidly becoming text.

Like Loading...
© Copyright 2018 By: Shannon Fay
About Shannon Fay
Shannon Fay is a Canadian writer living in Nova Scotia. She can be found online @shannonlfay or www.ayearonsaturn.com. IRL she can usually be found in her kitchen cooking or in the living room watching horror movies.
No comments yet. Be the first!