Non-Fiction, Reviews
Size / / /
In The Labyrinth of Drakes by Marie Brennan
By: A. S. Moser 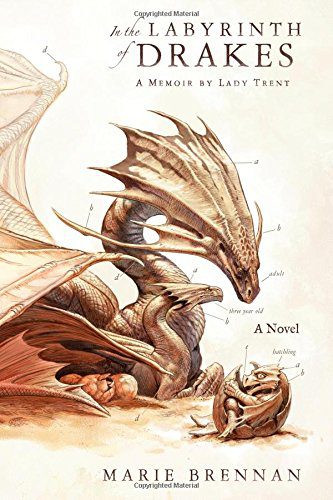 For readers new to The Memoirs of Lady Trent, a quick note: think Jane Austen writing about a female Charles Darwin, but instead of finches and mollusks and tortoises there are dragons. If that doesn't pique your interest, do yourself a favor and flip through a copy of the first book, A Natural History of Dragons (2013), with its excellent illustrations by Todd Lockwood, then read the first chapter.

This fourth book in the series, In the Labyrinth of Drakes (2016), moves the drama to the deserts of Akhia. The freewheeling, hopscotch nature of Lady Trent's journeys adds verisimilitude to her story—the wealthy naturalist/adventurer/explorer in the early days of a new science doesn't spend her career eking out every nuance of a particular species; she funds expeditions around the world and makes the grand discoveries upon which others build the field—but it also makes a neat narrative division between volumes and offers readers a chance to explore this world with the protagonist. Perhaps a little too neat a division for some readers, but that sense of artificiality plays into the overall narrative conceit—this is a grande dame telling all after the fact; we're looking at the post-process of her sense-making of her own story.

One potential downside to these divisions, however, is that it creates a narrative box for Brennan—we go to Akhia, and we stay there, and all conflict both external and internal is catalyzed by Akhia. Considering how much influence North Africa has over the depiction of the peoples of Akhia—the two modern peoples are near-direct analogs for Arabs and Berbers, and the ancient empire of Draconeans is a clear echo of pharaonic Egypt—the sense of exploration is less rooted in geography and culture here than in previous volumes. Readers are likely to be more familiar with these archetypes than those found in previous volumes; while this does erode some of the appeal, it allows Brennan to make this, as the protagonist notes at the beginning of the text, “an exceedingly personal tale” (p. 9). There are still exploits aplenty—she is, once again, kidnapped, and we begin to gain some answers to questions the first three volumes have posed about the Draconeans—but much of the novel focuses on the nuances of a long drawn-out shadow courtship between Isabella and Suhail, whom readers will recall from Voyage of the Basilisk (2015).

One might call theirs a relationship we need—it is based on mutual respect, and manages to sidestep the false choice between family life and work life—but it's not terribly interesting. Explaining her process for experimentation upon dragon eggs, Isabella notes, “There is a phrase engineers use: ‘testing to destruction.’ It is not enough to know that a beam is strong; they must find out how much weight it can bear before snapping. The only way to do this, of course, is to pile on weight until it does snap” (p. 286). This might have been a more engaging plotline if the author had followed this advice with her characters. For a novel containing a looming war, daring nighttime raids, groundbreaking discoveries of secret chambers, and near misses with assassins, it is nevertheless a very quiet book. Much of this quietude has to do with the narrator's steady confidence and wry sense of humor, often downplaying her importance with casual grace: “Had my increasing notoriety gone that thoroughly to my head?” she wonders at one point, wrestling as she often does between her ambition and her sense of duty. “[M]y purpose here was not to increase my fame as an adventuress; it was to study dragons” (p. 177), she has to remind (and scold) herself.  But beneath that measured surface lies a restive exploration of gender. On the cusp of the most important discovery of her life, Isabella notes that “Suhail took the lead, but I followed with my hand in his, one step behind only because we could not comfortably walk side by side” (p. 318). It is here, in the implications of this moment and Isabella's awareness of what it forfends, that the novel truly excels.

Throughout the series Lady Trent has had to push back against the constraints of a male-dominated society that sees no place for a woman of science, and this novel ratchets up that facet of the narrative to its highest point. In Scirling, Isabella has to deal with a press more interested in her personal life, and fellow scientists who would prefer to ignore contributions coming from the female of the species; in Akhia, however, she cannot leave the house without a male companion, is constantly having to make concessions to her living arrangements that make field work a challenge, and can't eat a meal or be alone in a room with a man without threatening her precarious position. The problem for Isabella, and the driver of much of the conflict, is that she is innately driven to rebel against such treatment: “Buried beneath that was something even less admirable,” she writes with usual candor, “the realization that I wanted to go in simply because al-Jelidah [her male guide] had said no” (p. 177).

This is where the image of her walking hand-in-hand with Suhail but one step behind becomes so important. Suhail is the historian, Isabella is the naturalist; Draconean civilization combines both of their fields of expertise, and by rights they should stand side by side. But they can't. There are class barriers, and even larger racial barriers (Scirlings would disapprove, while Suhail's brother, the sheikh, forbids it). But, more than anything else, Isabella is held back by her sex. As she notes in a moving conversation with her brother, Andrew, “People will forgive a slip, a weakness, a minor personal folly—when it comes from a man. They may click their tongues at you, even gossip about your behavior … but at worst, it will only reflect on you. If I misstep, it goes far beyond me. Errors on my part are proof that women are unsuited to professional work” (p. 167). In a double standard modern readers will recognize, when Isabella excels, it is because she is exceptional; when she fails, it is because she is “a woman, like any other” (p. 168).

The ways Lady Trent must navigate the paradoxes of being a professional woman and a celebrity, sometimes successfully, sometimes foundering, are what elevate the series, and in particular this volume, above what might otherwise be merely a quaint concept with an interesting protagonist. Brennan is doing important work with her fiction, and she's clearly conscious of that. See, for example, how Isabella denies the false choice between helplessness and violence when speaking to her brother after being rescued from her most recent kidnapping:

There is a proverb that says, To a man with a hammer, everything looks like a nail. If I had a gun, it would shape my thinking; the violent response would always be there. A possibility—sometimes a tempting one. It might result in more death; and one of those deaths might be my own. Armed or not, I might die in the field. But I would rather die failing to think my way out of a situation than failing to fight my way out … I do not want to become the sort of person for whom that is a standard option when trouble arises. (p. 250)

Brennan is American, and one cannot read that passage without seeing the commentary on America's gun crisis; some of her American readers may take exception to her stepping into such a controversial debate in her fiction, but it bears larger implications to the questions of power and application of force. Lady Trent does not deny there are “ways to make myself a little safer,” and admits that “learning them might be valuable” (p. 250). She isn't taking a side here, so much as she is pointing out that there needn't be only two sides; this is no zero sum game in which whoever has the most might is the victor. Which brings us back to kidnapping as a narrative device.

I initially found the kidnapping troubling. The first time Isabella is kidnapped in Vystrana, she uses her intelligence to escape. In Akhia, she attempts this but fails. She isn't killed, as a man might be (indeed, Tom faces worse punishment over his role in her attempted escape than she does), but she cannot get away without being rescued. On the surface, this seems to undermine what Brennan has been doing with this character for four volumes. This would be a misreading, however. For one thing, it is the notoriety Suhail gains from his role in the rescue which grants him the ability to outmaneuver his brother the sheikh and marry Isabella. Until this event he is undervalued by his own people—the younger, bookish son in a culture that prizes bravery and feats of arms. More importantly, Brennan is acknowledging that derring-do and pluckiness are not the panacea to female oppression; there are some very few things that Isabella simply cannot do no matter how driven and intelligent she is. Similarly, there are some things she can do which no one else can, such as explore the hidden dragon hatchery—her lack of physical prowess, which has hindered her on every page, grants her the first and only access through an extremely narrow entrance to a collapsed tunnel where she makes her greatest discovery. The text rejects either/or dichotomies—either work or family, either strong or weak, either hero or villain—to assert that we all possess strengths and weaknesses, that we need each other. For a series built upon the exceptionalism of one woman, this message of strength through interdependence is refreshingly complex and honest.

In the end, the narrative suggests that her relationship with Suhail—based on mutual respect and understanding, acknowledging that neither partner can do everything all the time, and that they are strongest when they play to the advantages each brings—is the ideal. Isabella's previous husband, Jacob, was attentive and loving and gentle—and, in his well-intentioned way, patronizing. He tolerated, even encouraged, her interest in dragonology as an eccentric but lovable quirk. To use a draconic metaphor, he may have taken off her chains, but he still clipped her wings; with him she may have been let outside the cage of her society, but was still unable to fly. With Suhail, whose name in Arabic translates roughly as “level” or “even,” and carries connotations of being companionable, they were colleagues first, then friends, then lovers. The work comes first. Not to read too much into a name, but Suhail is also the Arabic name of the star Canopus, the second brightest star in the sky. This always has been, and remains, Isabella's story.

Like Loading...
© Copyright 2017 By: A. S. Moser
About A. S. Moser
A. S. Moser is a writer and teacher. His current project is a near-future novel about rising seas, the collapse of currency, and smuggling. For more, follow him on Twitter.
No comments yet. Be the first!