Reviews
Size / / /
A Love of UIQ by Félix Guattari, translated by Silvia Maglioni and Graeme Thomson
By: Anna Chapman 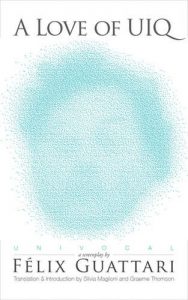 A Love of UIQ was the pet project of Félix Guattari, a psychoanalyst and political activist most famous for his collaboration with philosopher Gilles Deleuze, in which they founded schizoanalysis and took on Freud, Marx, and capitalism. It has reemerged thanks to the efforts of Paris-based filmmakers and artists Silvia Maglioni and Graeme Thomson, whose work "interrogates potential forms and fictions emerging from the ruins of the moving image." [1] They have undertaken an ambitious multiform project [2] spanning documentary, lectures, "seeances," and multimedia experiences to explore the central themes of Guattari’s tale. Their publication of the script follows on the heels of their 2013 film In Search of UIQ—part documentary, part reenactment of Guattari’s attempts to get his film made.

Offering me a science fiction film script written by a French psychotherapist and philosopher is a great way to grab my attention. It sounded like an intellectually daunting challenge, but one I couldn’t resist. Unsurprisingly, it isn’t the most accessible piece of writing at first contact; the script comes complete with two forewords—one by the artists, one by the author—which are both dense with jargon and had me reaching for the dictionary.

Ultimately, I shamelessly decided to put down the manual and just get reading. Context is important, but I was more curious to see whether the script could stand on its own two legs as a piece of entertainment.

Others have previously decided that A Love of UIQ is "unfilmable"; it has never been committed to celluloid (or bytes). But I have some inkling of how unfair the Hollywood process is: it’s a money-making machine looking for sure things. With science fiction classics like Rendezvous with Rama and At the Mountains of Madness languishing without a green light while the latest franchise gets another outing, it doesn't do to leap to conclusions. Risks need champions.

A Love of UIQ follows the efforts of Axel, a young German biologist, to establish communication with a mysterious entity (UIQ) that he finds when studying chloroplasts in phytoplankton. When his experiments disrupt radio signals and attract international attention, he finds himself on the run with an American journalist. They are taken in by a punk DJ, and Axel convinces the residents of her squat to help him set up a new lab. The unlikely team attempt to find a common frame of reference with UIQ, but are entirely unprepared for the consequences of it assimilating their teachings so fully that it falls in love.

So far, so science fictional—and at this distance, so Hollywood-friendly, with its suggestion of love as a constant. Indeed, and like the best—or worst—Hollywood blockbusters, A Love of UIQ feels flimsy as soon as you scratch the surface. It’s evident that Guattari had limited experience of narrative development, let alone scriptwriting. Early scenes focus on minutiae that do little to establish character or move the action along, while the script later rushes through major plot developments to reach its catastrophic finale. UIQ’s frustrated efforts to communicate result in the squatters being arrested as terrorists after a plane is downed. In response, UIQ unleashes a wave of mutations to hold the authorities to ransom, demanding to be reunited with its (reluctant) beloved.

When the focus zooms out to look at the global impacts of all this, and the response of an obscure governmental organisation which is trying to find the underground researchers, the script feels like a different film entirely. It could be a Terry Gilliam-esque vision of absurdist authority, but instead it feels farcical—and not in a good way. It isn’t hard to see why Hollywood producers politely declined the opportunity. Ultimately, both the attempt at an intimate personal narrative and the broader disaster movie feel incoherent.

I was surprised to find the characters just as poorly served. On some unconscious level, I expected rich character design and nuanced development from a psychotherapist. Instead, Guattari presents a hodgepodge of sexism and classism, starting with the casting calls: Axel, a biologist; Fred, a journalist; Janice, "not exactly beautiful" and "ready to resolve her emotional and relationship problems by going to bed with the first guy she sees."

Janice turns out to be the punk DJ with an instant if unlikely fascination for Axel’s research, who introduces him to the squat. Guattari sneers at her club as having "an odd, multiethnic clientele, a mix of jobless youth, drug addicts and other marginals." Given Guattari’s background in radical politics, you might have expected him to be more sympathetic to the punk scene.

His description of the teenage couriers who share Janice’s squat is similarly coloured with snobbery: "Physically, they resemble standard-issue junk-food-consuming teenagers in leather jackets and astronaut-style motorbike helmets … Clean and polite but fundamentally hollow, they’ll no doubt end up serving behind a counter. They don’t know it but the audience does!"

The other squatters—who conveniently include a former NASA engineer—are as rapidly and unexpectedly engaged with the idea of contact with another species as Janice. Half the introductory scenes seem to exist only to establish how quirky these characters are—and how unfit for scientific research, let alone first contact.

I was torn between trying to interpret character archetypes within the Hollywood model (Janice as manic pixie dream girl) and simply dismissing them as a bad job. Axel has unexpected acrobatic abilities, which—sexual implications aside—are apparently intended to "evoke the way in which UIQ turns towards humanity." A few other things could have done with some evocation, too. The dialogue (complete with casual homophobic, misogynistic, and xenophobic asides) does little to establish anything beyond the bare bones of these characters.

As an exercise in storytelling, A Love of UIQ falls woefully short. However, there are hints of a more promising script in the ghosts of early drafts, when Guattari was still collaborating with Robert Kramer, a left-wing political film-maker.

Kramer wanted to tell the story as a series of flashbacks, abandoning linear narrative in favour of exploring how Janice is slowly subverted by her exposure to UIQ (and vice versa) through a series of dissociated memories. A later iteration moved the action to an eerily-familiar dystopian Paris, where digitally encoded personal swipe cards are required to gain access to the city’s amenities. This setting might have provided fertile ground for Guattari’s (and Kramer’s) politics, giving UIQ the potential to disrupt state control as well as examining subjective experience.

Unfortunately, all of these concepts were swept away by the final draft. Guattari admitted that he had no filmmaking credentials and was aware that the script was at best a crude sketch of the film he had in mind. Perhaps the final irony of this experiment was Guattari’s inability to be objective about the project—prizing his own subjective truth over the insights offered by his cowriter’s experience.

Like Loading...
© Copyright 2017 By: Anna Chapman
About Anna Chapman
Anna Chapman has been reading for nearly as long as she has been walking (arguably with more success, or at least fewer accidents) and has never been shy to share her opinion. Her musings on books and other narratives can be found on her blog and on Twitter.
No comments yet. Be the first!