Reviews
Size / / /
A Man of Shadows by Jeff Noon
By: Catherine Baker 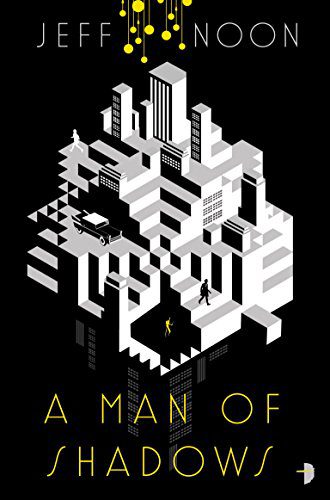 For six months of the year in Rjukan, citizens only feel the sun through mirrors. The small town in Telemark, crammed on to the narrow floor of a deep valley, installed giant heliostatic mirrors high on the mountainside in 2013 to reflect direct sunlight into the town square. Elsewhere in Norway, almost two thousand kilometres further north, the mountains surrounding Tromsø combine with its latitude to create two months a year of constant polar night.

Dayzone and Nocturna, the twinned cities of Jeff Noon’s A Man of Shadows, push the situations of Rjukan and Tromsø to searing and sunless extremes: while Dayzone is kept in permanent sunlight by a system of artificial lamps, blazing globes and neon tubes rigged for miles across the entire sky, Nocturna is shielded utterly from sunlight by barriers that keep it in permanent darkness, studded with fixed constellations of electric stars. Between them, so dangerous that the authorities only permit it to be crossed by train, is the slowly creeping frontier known as Dusk.

The unsettling effect life in either city would have on the human body clock, as submariners and night-workers know well, is accentuated by Noon’s other worldbuilding move, as fundamental to A Man of Shadows as its day-night contrast yet far less apparent from the book’s marketing: the fact that every resident of these two cities can choose to experience daily time on their own individual schedule by subscribing to one of the Ariadne Centre’s hundreds of personal “timelines.”

John Nyquist, private investigator and Noon’s titular “man of shadows,” is pulled into a chase from Dayzone to Nocturna when the chief executive of Ariadne, Sir Patrick Bale, hires him to find his missing daughter Eleanor. At first, Eleanor seems to have disappeared into the edge-zone of Burn Out, drifting between drop-out sects and seedy hotels among a crowd of “dazzle junkies” hooked on amplified light and synthetic substances in an echo of the psychedelia of Noon’s most famous works Vurt and Pollen. The stranger truth will see Nyquist pursue Eleanor into the dusklands, where he seems to witness her killing the man she claims is her real father, outsider artist Dominic Kinkaid, and discovers her case has become entangled with that of a Ripper-like spree killer terrorising the city, the invisible and lightning-fast Quicksilver. The mystery will drag him through the Dayzone and Nocturna underworlds and even the non-linear time of Dusk until the consciousness-altering conspiracy that binds the Bale and Kinkaid families and the secret to Quicksilver’s crimes are both revealed.

Dayzone and Nocturna are metropoles of underhand business and alternative religion that sometimes resemble a blazing or pitch-dark Viriconium, sometimes call to mind China Miéville’s juxtaposition of two cities separated in the same geographical space by an impassable, conceptual Breach. Dayzone sizzles and whirrs with chronologists’ guilds, cults worshipping every solar deity from Apollo to the holy trinity of earthed electrical wire, and sprawling markets and red-light districts blurring “the artistic and the sexually bizarre” (p. 46). Its contrast with Nocturna might occasionally echo pseudo-Habsburg Beszel and Levantine Ul Qoma, the co-located cities made invisible to each other’s inhabitants that frustrate the detective protagonist of Miéville’s The City and The City—a novel that set the philosophical pace for what the genre might expect diametrically opposed cities to reveal about the society that has been divided between them, or the society that uses them to imagine a truth about itself.

And yet the history of Dayzone and Nocturna is as hard to view as both cities’ physical sun. The artificial day and night above each city have existed for long enough for several generations, at least, of life, culture, and commerce to have grown up around them: the spectacular projects cannot have happened in anybody’s living memory, or at least, “even the oldest residents” of Dayzone (p. 30) have never seen the sky. The rupture that Dayzone has suffered is the “time crash,” a collapse of society’s multiple timelines that Ariadne “only just survived” (p. 44), and anxiety over a repeated time crash as big business accelerates the personalisation of timelines remains a pervasive sense of impending catastrophe. Noon does not trace the economic implications of such radical technology much further—we are not even sure where the electricity to power Dayzone’s lamps and Nocturna’s failing stars is coming from—keeping a tight focus instead on Nyquist’s struggle with psychological dusk.

Neither are we sure what history and geography the cities have come from. The year might be 1959, though newly elected councils have a habit of taking away the odd calendar year. The world contains a south of France, where Eleanor’s upper-class friends holiday; Sir Patrick Bale must owe his knighthood to some British, imperial or Commonwealth realm; the characters know Tennyson, who “described time as a ‘maniac scattering dust’” (p. 44), and one man can tell another he “fainted … like an old lady in a Victorian novel” (p. 83). Nyquist and other characters his age remember something that was probably the Second World War, although it does not impinge on their consciousness beyond the frightening memory of Dayzone being subject to blackout, producing a curious version of alternate history that has decided what the city did with its lights under the threat of German bombing but not what form a war that came intertwined with Nazi genocide in our world would have taken in a world where cities can be canopied in permanent night or day.

Nor do we learn what history of coloniality these cities or their government might have in their unspecified location, which might tend towards British in its cultural references yet, with its identity so defined by a tycoon and his corporation overlooking skyscrapers and misty backstreets, could equally be home to Green Arrow or Batman. (Their society certainly knows colonial anthropology: early in the quest for Eleanor, Nyquist acquires an unspecified “old travelogue” [p. 55]  describing intergenerational traditions of Javanese shadow puppetry to explain why she had a leather wayang kulit figure in her abandoned bag.) While the blackout reference might position it in Europe, Dayzone’s electrically enhanced climate is the baking heat of California or Australia. The cities might be on signed-away or stolen land; they might just as easily be in the same space as Liverpool or Manchester.

Within this culturally bewildering spectacle, Nyquist anchors the reader in familiarity by fulfilling the private-eye archetype of noir so well that one constantly suspects Noon of more sleight of hand. We first meet him “alone in a crumpled blue suit and a slanted hat” (p. 13), stepping on to the platform of Dayzone’s grand central station nursing fresh bruises from the insurance scam he’s solved the night before; Nyquist can give as well as take a beating when he has to, all the more so when he has male pride to keep up after a past failure, and we know there’ll be whisky in his office even before he pours himself a glass. Why does this book need this setting in order to tell this story about this man, when the private eye with a shadowed past is such a cliché that surely Noon can’t just be playing it straight? The answer might be how deeply the setting is designed to identify the cities with Nyquist’s mental state. We learn early on that Nyquist moved to Dayzone–Nocturna from outside to become a private detective in order to give his life purpose after the loss of his mother, and his father’s grief, had marred his childhood and led him into a series of dead-end jobs: “he had the wherewithal and the muscle and the smarts, and over the years the city had entered his bloodstream, building a map inside his psyche” (p. 52).

A shadow play that Eleanor stages as an origin myth for a microscopic new cult in the dusklands about the continuous struggle between night and day similarly leaves Nyquist “only [able to] think of the story as being his own: the wound in the night sky his own wound […] and the dusk his rightful place upon the world” (p. 283). Ever more haunted by visions of the truth about his mother’s death, Nyquist is certain by the time of the final confrontation “that Dusk was a region not of the real world, but one conjured from his own inner landscape; or a land which modelled itself on his thoughts, his memories” (p. 317). It is in an abandoned hotel in the dusklands where Nyquist discovers how the true Quicksilver killer has manipulated three generations of the Bale and Kinkaid families, how Eleanor’s fate has been tied to a stolen shadow self, and what he must do to free her from the plot dreamed up by her grandmother Aisha Kinkaid—a disturbing antagonist role to ascribe to a “scary” (p. 213), yellow-eyed old woman with an Arabic first name.

Indeed, what Nyquist must do to rescue Eleanor is disturbing itself: with the drug-induced vision of himself killing Eleanor playing on his mind, Nyquist’s final act in the hotel is to subdue and suffocate a struggling young woman. Her fading breaths produce another vision that explains the guilt his father hid from, and the resolution of his lifelong psychological battle gives Nyquist the knowledge that allows him to resuscitate her, a necessary act for Eleanor to escape possession. Yet the taut narration of detective fiction implicates us in the instinctive “surge of blood” with which Nyquist reaches for and presses down the pillow (p. 349). If only for a page or two, we believe with Nyquist that the woman is dead, and we are asked to believe it was necessary for her to be killed.

A Man of Shadows is, the title page tells us, “a Nyquist mystery”: readers hoping to follow Nyquist through other cases have every chance to encounter him again. If the noir tradition makes the troubled male detective a manifestation of his troubled city, this blend of fantasy and noir which represents a new step in Noon’s career makes the city a manifestation of the detective himself. Its sequels (to include the recently announced The Body Library) might dive further into the underworlds of Dayzone and Nocturna, or take Nyquist to new settings that continue to externalise the psyche of a man that countless versions of the private-eye trope have already taught us how to know well. It remains to be seen whether new Nyquist stories would go any further than A Man of Shadows in explaining how, why, or when this unnamed society might have built its cities of permanent day and equally endless night. But if this novel seems not to explore in depth the effects of night/day dislocation or the fragmenting of timelines on anybody beyond Nyquist across Dayzone–Nocturna, or the history that made them come about, perhaps it is because its purpose means it does not need to: this is a city designed for one man’s pain.

Like Loading...
© Copyright 2018 By: Catherine Baker
About Catherine Baker
Catherine Baker was born in London and lives in Hull, UK. She writes, in various combinations, about books, pop culture, history, feminism, queerness, mythology, and magic. She tweets at @richmondbridge and blogs at http://littlequeerideograms.wordpress.com.
No comments yet. Be the first!