Reviews
Size / / /
After The Flood by Kassandra Montag
By: A. S. Moser 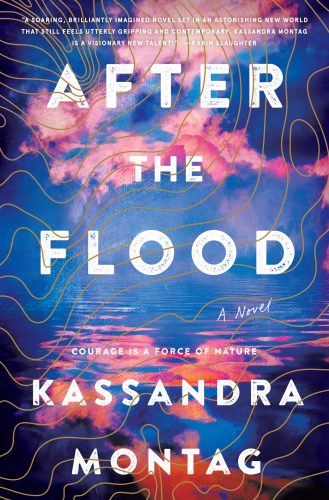 When the water buried the earth, it felt like it was erasing us. The whole world a grave. But we would rise with the horizon if it continued to rise; we'd mark the sky with our silhouette before disappearing over the edge of the earth. (p. 415)

These are the reflections of Kassandra Montag's narrator, Myra, in the final pages of the novel—but they could just as easily have come from its beginning. After the Flood is a book that teeters on the edge of despair without ever quite falling over—a novel that, to paraphrase Oscar Wilde, may be in the gutter but is looking at the stars. There's a dark heart to this novel, and that darkness is our own: after the destruction of society and the reshaping of the world, survival and morality are often at odds, and no one's ideals are left unsullied by the vagaries of life. While the novel's title suggests a Noahic story of salvation, After the Flood shares more in common with a journey into the wicked, antediluvian past than a hopeful, post-Flood new beginning.

There are a number of references to the biblical flood story throughout the text, but the one which best serves as an example here is Myra's boat, Bird. In Noah's case, a bird is repeatedly sent out as a symbol of hope—that dry land is near, that the flood has ended, that they can rebuild—and, when a dove finally returns with an olive leaf, they know their journey is near its end. Here, however, Myra's Bird crashes and sinks fairly early in the story, leaving her and her daughter Pearl stranded with a strange man, Daniel. And while this Daniel seems to be stalwart and honorable like his namesake, he carries a violent and bloody past that will follow Myra like sharks following a ship. Montag is well aware of the power her allusions carry, and is adept at twisting them so the weight they carry is propelled in new and often unexpected directions. Captain Abran, for example, is the leader of a group of outcasts who seek a new land to escape the seas and live peacefully. He carries connotations of Abraham leading his people to salvation, and Myra entangles her own quest with theirs; but his name also calls to mind Ahab, whose monomaniacal obsession leads to destruction. And while as leader of a metaphorical ark his drinking is expected, Abran’s alcoholism becomes far more meaningful to the plot of the novel than the morality story this allusion initially suggests.

At its core, though, this is a simple story—a parent undertakes a journey to save her child. And, while the world has been mostly covered by water, this is more The Road (2006) than Waterworld (1995): Myra is desperate to keep Pearl safe, and everyone they meet is a potential threat. But it isn't just Pearl that Myra is trying to protect, and here is where Montag's complex characterization starts to shine: Myra has an older daughter, Row, who was stolen by Myra's husband seven years ago while Myra was pregnant with Pearl. Our plot takes off when Myra discovers that Row has been seen, recently, in a colony far to the north called the Valley; she's nearly the age where the colonizers, a band of pirates who sack and then run villages as tribute bases, will force her into a life of rape and pregnancy in a breeding ship. To make matters worse, plague has hit this colony. And thus we get one of the more compelling moral dilemmas in the novel: as Myra puts it, "I would be exposing [Pearl] to the plague by going. I would be resigning Row to a life on a breeding ship if I didn't. I'd never imagined having to choose between them" (p. 191).

Which child do you choose? Myra, of course, tries to save both; this is the engine which drives the plot, after all. But Pearl, while only seven herself, is precocious enough to be aware of how Myra endangers her to save Row, a sister Pearl has never met. This realization causes tension between mother and daughter, which rises throughout the novel until it boils over after Myra risks an entire ship of people by sailing into an arctic storm:

An average novel would have this as the breaking point, the lowest ebb before the emotional tide comes back in. But, when just a few chapters later they are attacked at sea and Pearl pleads with Myra not to abandon her, Myra chooses to leave her alone in the dark hold of the ship while she returns above decks to the fight.  When the ship founders, Myra places Pearl alone in the only lifeboat, pushes her off toward land, and turns to the fight once more to help her shipmates.

Everything in me reached for Pearl, yet I also felt a resistance in my bones. A knowledge that some choices are places and some places are where you cannot live. I had to go where I could live. I had to finish what I started and to keep stretching toward a future I had no right to believe in. (p. 356)

As a parent, I'm horrified; as a reader, I appreciate the author's skill at crafting this emotional reaction and adding yet another layer to our already complex protagonist.

The tone of Myra's resignation here is striking as well: she doesn't believe she deserves a better future; at times, she doesn't even believe she deserves Pearl, and in these moments the most she dares is to not live through her child's death: "I'd brought her into this world, and some days all I hoped was that I wouldn't be around when she left it" (p. 151). This kind of hopeful despair runs right through the text, like the keel on a ship, balancing it and keeping it upright against the heavy seas of the plot. On the one hand, we have children as representatives of new life and possibility and hope, and on the other there are so very few children in this mostly adult world—which remembers everything that's been lost, and which wears its sorrow like a second skin.

Myra compares this grief to "being lowered into a well, water rising around me as I clawed at the stone walls, reaching for sunlight" (p. 49); Daniel later remarks, "You get used to loss like you get used to water. You can't even imagine what it'd feel like to not be with it, not have it all around you" (p. 412). But perhaps the strongest example of this desperate balance between hope and despair comes from Marjan, the oldest of the female sailors on Abran’s boat, who witnesses her son’s murder while she is powerless to help:

“I keep thinking grief feels like climbing a staircase while looking down,” she said. “You won't forget where you've been, but you've got to keep rising. It all gets farther away, but it's all still there. And you've only got one way to go and you don't really want to go on rising, but you've got to. And that tightness in your chest doesn't go away, but you somehow go on breathing that thinner, higher air. It's like you grow a third lung. Like you've somehow gotten bigger when you thought you were only broken.” (p. 283)

It is in moments like these, when we stand on the precipice of nihilism and only just manage to turn back, that I am reminded less of McCarthy's bleak vision in The Road and more of Emily St. John Mandel's Station Eleven (2014). How do you go on in the face of all that has been lost? As Marjan puts it, “You do the hardest thing. The most impossible thing. Again and again” (p. 325). You keep going. There’s such an aching beauty in these moments, a powerful resonance for anyone who has faced loss, and Montag plays that chord with wrenching skill.

I want to give a final consideration to the cast of supporting characters. Marjan, as noted above, has every reason for her grief, yet is able to suggest a way for Myra to keep striving. She's not consumed by loss, so while she is a static and mostly flat character, she has some depth to her character, and provides a glimmer of humanity beneath all the hurt. The same is true of the other secondary characters: the drunken captain, Abran, a former pirate hiding from his past; and Daniel, whose test is not a literal lion's den but rather that oldest of hatreds—his own brother—they orbit around the gravity of Myra's quest, simultaneously drawn to her need and repelled by the centrifugal force of her desperate anger. They serve the story well, and have complicated histories that affect the plot in meaningful ways, but they’re not quite the fully imagined supporting cast one might hope to see, and bear a little too much resemblance to each other and to Myra’s absconded husband.

Pearl is the odd one out, and some of the strongest moments of pathos in the novel are hers. She's also a familiar kind of character—the precocious young girl who serves as both the foil to the protagonist and also the voice of wisdom in a mad world—but Montag alters this trope by giving her a peculiar fondness for snakes in another echo of biblical symbolism, and the snakes do have a purpose in the plot beyond the reminder of the Fall. Where Pearl really shines, though, is in how realistically her childhood traumas have affected her. We see her exclaiming, “Pretty, pretty,” as she hacks apart brightly colored fish (p. 185); we see her smiling at everyone at her birthday party, all the while knowing her mother is deceiving and using them (p. 215); we're told she “observed the world like she was listening to something very far away, like she had a third hand with which she reached out and touched something invisible” (p. 290). And in the scene in which her snakes finally take on literal meaning, she calmly explains how their venom works, flinging them at a woman who then chooses suicide over the slower, more agonizing death the child describes (p. 409).

In the end, we're left with a somewhat meandering plot, as Myra goes from plan to plan, deception to deception, to fulfill a quest that—for Myra—is ultimately irrelevant, as she discovers her older daughter’s grave marker at the abandoned colony; alongside this not-very-admirable protagonist we have a cast of supporting characters who occasionally sound like they're speaking in a similar voice. But the novel works, and well, at offering a realistic portrayal of human spirit in the face of overwhelming difficulties, of the love and fear that accompany parenthood, and at the ways an unsympathetic universe compromises even our most deeply held moral beliefs. After the Flood is a riveting and dark portrayal of what one mother will do to protect her children, and while it may not be the kind of book you gush to your friends over, it lingers long, and leaves behind an indelible watermark well after its waters have receded.