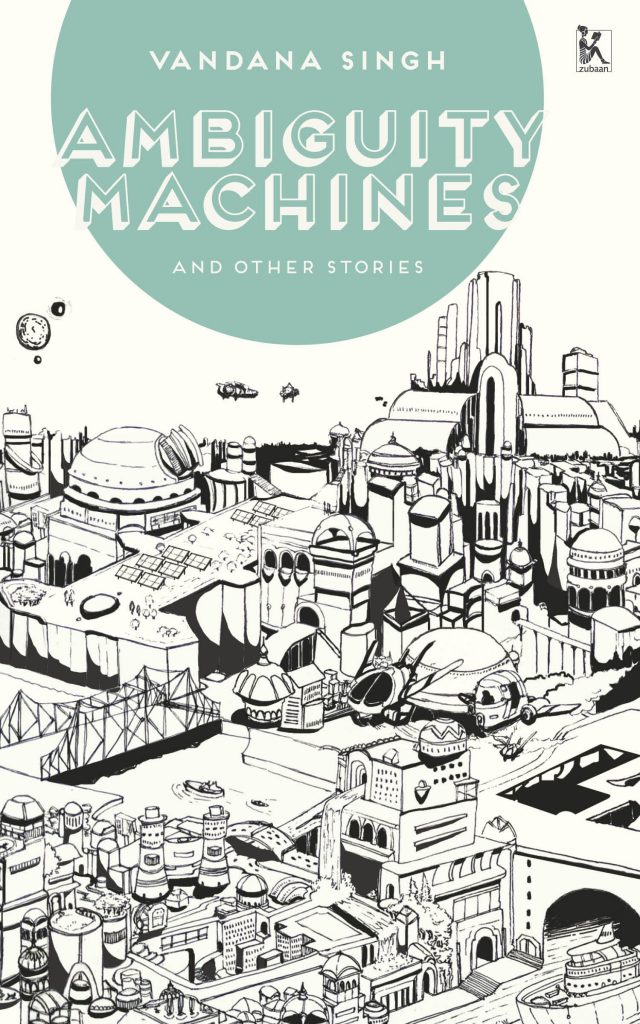 Vandana Singh’s “Ambiguity Machines: An Examination” is one of the most gorgeous short stories ever written. A strong statement, but I stand by it. First published on Tor.com in 2015, the story is a beautiful and impressive balance between heady, speculative abstraction and emotion grounded in the concrete moments of characters’ lives. The story presents itself as an exam for those seeking the position of Junior Navigator in Conceptual Machine-Space. The exam's introduction slyly introduces the concept of impossible machines, and the subcategory of “Ambiguity Machines: those that blur or dissolve boundaries.” The opening reads like an intellectual exercise about the relationship between reality and non-reality, with the Ambiguity Machines of the title perhaps occupying a space that is somewhere between the two. What follows goes far beyond intellectual exercise. Three vignettes—each an example of an Ambiguity Machine—tell aching stories of longing, loss, and love. An imprisoned engineer builds a machine that will help him remember the face of his distant love. A mathematician and an artist are united and separated, repeatedly, by the mysterious tiles in a church courtyard. A lonely archaeologist encounters a surprising community in the midst of a war zone. In the end, the story returns to the frame, but with a difference. The exam becomes something more than an intellectual exercise. With a tone of yearning, the exam asks: “Is it here, in the realm of dream and imagination, that the intelligent machine might at last transcend the ultimate boundary—between machine and non-machine? To take inspiration from human longing, from the organic, syncretic fecundity of nature, the candidate must be willing to consider and enable its own transformation.”

Unsurprisingly, that 2015 story gives Vandana Singh’s latest collection its title. Ambiguity Machines and Other Stories is Singh’s second collection (though the first to be published in North America) and the stories included are the work of a seasoned author engaged in an ongoing conversation about how and when people are able to consider and enable their own transformations.

Singh is a physicist and, unsurprisingly, several of these stories feature characters who are academics, scholars, scientists, or engineers. What interests her about these characters, though, is not the trappings of these roles (the university, the lab), but how people run headfirst into the world under a desire to understand the world, and how they are transformed in the process. In “Ambiguity Machines,” the archaeologist of the third vignette discovers that the boundaries between her and other people are not as solid as previously thought. In “Peripeteia,” a physicist loses her sense of the world when her lover leaves unexpectedly. Though most of the story occurs within her home, her attempts to understand—to theorize—lead her down disorienting mental paths, until all her theories are broken open through a series of encounters with time as a physical, dusty road, snaking through a misty landscape.

Scientists are not always the ones who are transformed. The first story in the collection, “With Fate Conspire,” features a group of scientists working on a project to save the world. The story, however, is told from the perspective of the woman the scientists are keeping captive. She is an illiterate refugee who can do the one thing they cannot: view the past through the machine they have created. She is not given a choice in their last ditch plan to save the world, is not even told the purpose of their directions to her, and is outraged when finally told. One of the scientists tries to explain:

“That's why we didn’t tell you,” she said. “You don’t understand, we—scientists, government, people like us around the world—tried everything to avert catastrophe…And now we are past the point where any change can make a difference.”

She shook her head at that, but she had no answer.

With her questions, the narrator wonders who has agency, who is taken into account when notching up the risks, who gets to voice an opinion when the risks are counted and a decision is made. Who decides what kind of change is necessary? In the end, the scientists are so focused on changing the world according to their own plan, they miss the transformations already taking place—whereas the narrator is changed, beautifully and sadly, by her attentions to the world around her.

In thinking about this collection, I was reminded of the late Ursula K. Le Guin’s essay “The Carrier Bag Theory of Fiction,” in which Le Guin says that “the reduction of narrative to conflict is absurd," and that narrative's "purpose is neither resolution nor stasis but continuing process.” Le Guin describes the narrative of conflict in order to set it aside for a different kind of narrative. The narrative of conflict, the “killer story,” is like an arrow, which starts in one place and travels directly to an ending, where it violently pierces its target. Instead, Le Guin prefers narrative as a bag, a container that holds many things in relationship. The stories in Ambiguity Machines do include conflict—there are even several stories in which one character is on a mission to kill another—but they rarely travel like an arrow. Instead, Singh holds conflict within the stories as one element of many, to be resolved or not, and rarely does that resolution come with the satisfaction that the characters in question have imagined.

In some stories, the conflict is so slight that a reader focusing only on conflict would miss the story entirely. “Indra’s Web,” which comes at the collection’s halfway point, is almost utopian. The story takes place in Ashapur, on the edge of Delhi. Ashapur is a former slum that has been transformed into a resource-rich community, “nearly self-sufficient in food and energy.” Importantly, the residents have stayed the same throughout this transition. The infrastructure improvements have supported the residents, rather than pushing them out in favor of those who already have access to more resources. The story follows Mahua, the lead scientist behind the Ashapur project, as she and her team struggle to understand why one of the suntowers which provide Ashapur with energy is malfunctioning. At the same time, she is caught up in worries about her grandmother, who is declining in the hospital. Through small moments, Singh illustrates a much larger vision of cooperation and growth. Even an argument in a suntower control room contributes to this vision:

A meeting was in progress, chaotic and impassioned as usual. Arguments and discussions in Hindi, English, and Bangla: Salman, deep in agitated conversation with Namita and Ayush; Hamid, a young trainee who had once begged on the streets as a child, patiently explaining the situation to the boy who had brought the tea.

In other stories, Singh’s characters struggle with communication, even when they have a common language, but in this scene, even a mix of languages is not an impediment. Most important, though, is the small moment of Hamid explaining the situation to the boy who brought the tea. What a contrast to the scientists in “With Fate Conspire,” who relied on that narrator's labor without deigning to explain what that labor was creating. 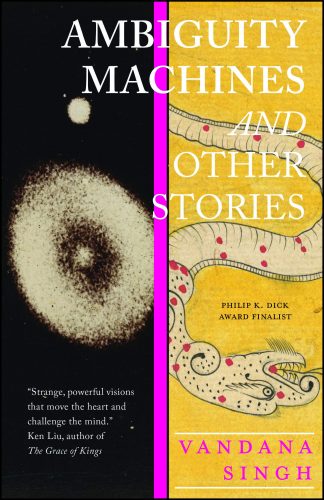 Ambiguity Machines feels like a united work, rather than a collection of disparate stories, because of those relationships between stories. “Indra’s Web” is a counterpoint to “With Fate Conspire,” as described above, and has connections to other stories throughout the collection. It has a particularly close relationship with “Are You Sannata3159?” which immediately precedes it. This latter story is a dystopic vision of a boy living in a city divided between the citizens who live in the towering buildings and those who live in the Undercities, where sunlight does not reach. It is a difficult story, in which opportunities for change seem hopelessly out of reach. What a shift, then, to end that story and begin “Indra's Web,” with its suntowers and its vision of Ashapur. That shift feels, in reading, like suddenly being able to take in a full breath of air. It feels like the sky opening into blue. It feels like an opening outward.

The transformations that Singh writes about, those moments in which characters and stories open outward, are often about moving beyond the human. Women transform into birds or aliens. A boy feels a painful and joyful connection with a bull. People see the writing of the world in wind and water. “Sailing the Antarsa” is one of many stories in which Singh explores the connection to the nonhuman as a social possibility, rather than only an individual experience. The narrator is from the planet Dhara, where a group of humans settled four generations prior. The process of settlement was very different from the genocidal violence of the colonial histories on earth. The narrator explains:

[Dhara’s] living beings adjusted and made room, and in turn we changed ourselves to accommodate them. So it was shown to us that a planet far from humanity's original home is kin to us, a brother, a sister, a mother. To seek kinship with all is an ancient maxim of my people, and ever since my ancestors came to this planet we have sought to do that with the smallest, tenderest thing that leaps, swoops, or grows on this verdant world.

The story illustrates this creed of kinship through the narrator's quest outward from Dhara, sailing on an altmatter sea that flows through everything. This is a story of discovery, but a discovery rooted in kinship, not domination or extraction or the genocidal belief that there was nothing or no one there before a discoverer arrived. In her present and in stories of her past, the narrator makes kinship with people, with animals, with altmatter beings, and even with loneliness.

“Requiem,” which is original to the collection, takes up this vision of kinship on a version of earth that is only a few steps away from our present. There are references to events that haven't happened, but could—the Great Melt, mining the moon, oil bans, geoengineering. In the midst of this near future, Varsha travels to a research station in Alaska to collect the belongings of her aunt Rima, who died in a storm. There, she learns about the research Rima and her partner Jimmy were doing with bowhead whales. Varsha's understanding of her aunt expands slowly, through conversations, belongings, whales, and the landscape. Singh is a master of compressed, jewel-like stories, but “Requiem” is novella-length and moves to a different rhythm. It is the quiet moment at the end of the collection, a meditation that brings Singh's questions closer to our present.

There is so much more in this beautiful collection than I have described. There are frequent references to Indian literature—the Ramayana in “Oblivion: A Journey,” the Kathasaritsagara in “Somadeva: A Sky River Sutra” (first published in Strange Horizons). I am not versed in Indian literature and can only imagine there are additional references, additional richness, waiting to open up. Time swirls through these stories as well, sweeping characters into unexpected pasts or futures and catching them in loops they cannot escape. Characters struggle with communication, with technology, with identity. Throughout, Singh asks: who might humanity become, if we reached beyond ourselves? Who might be waiting for us? What might we find, if we look?

To take inspiration from the universe, humanity must be willing and able to consider its own transformation.

Like Loading...
© Copyright 2019 By: Sessily Watt
About Sessily Watt
Sessily Watt endeavors to embrace uncertainty and the limits of her own knowledge. She often fails, and tries to embrace that failure as well. Her writing has appeared in NonBinary Review and Bookslut. You can find her at sessilywatt.weebly.com and on Twitter as @SessilyWatt.
No comments yet. Be the first!