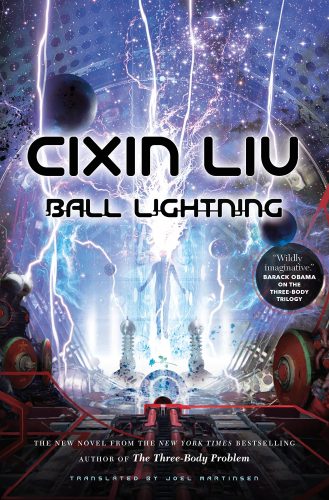 Ball Lightning, originally published in 2005 but translated into English by Joel Martinson this year, can be described as a procedural science fiction; one that takes readers through the excitements and frustrations of research, focusing on theoretical modelling and experimental physics, and the scientific enquiry that bridges them both. In a way, it’s a reserved prequel to Liu’s Remembrance of the Earth’s Past trilogy, which uses the mystery of its titular phenomenon as a staging post for the concepts to follow. Still, the book manages to be an exciting standalone, swinging its narrative between the borderlines of paranormal and hard science fiction.

If I may use The Three-Body Problem as the reference, Ball Lightning can be considered as a story co-existing in or parallel to that timeline, with the plot opening in modern China, post-Cultural Revolution. The book is written, except in its latter half, in the first-person, through the eyes of Dr. Chen—who has dedicated his whole life to understanding the phenomenon of ball lightning, having lost his parents to an occurrence of it as a child. This fictional narrative is intertwined with post-Cold War diplomacy, with real people and confrontational events like the Vietnam war and the Zhenbao Island Incident making cameo appearances. An imminent or on-going new war makes China restive, focusing its energy and resources towards weapon research; and Chen finds himself applying his atmospheric science expertise into that domain with other scientists as Lin Yun and Ding Yi. From this premise, the author ups the ante by challenging our fundamental understanding of the laws of physics, often lifting the constraints and repeatedly changing the boundary conditions. It’s both ridiculous and amazing at the same time.

As usual, fleshed-out narratives, developed characters, and poetic embellishments aren't Liu's selling points. It is the idea, and the science he uses to back it up. This book isn't any different; he translates the hard science into palpable language using analogies, passing references, and seemingly insignificant details which are later revealed to make up the very knot binding the whole plot together. His portrayals of scientific community and research projects are quite realistic, except for certain elements such as the protagonist's idealistic PhD defence or peers who are too open for their own good. Yet, at many times, I found myself shaking my head in acquiescence in the way of Liu’s theoretical physicist Ding Yi, unsure whether it's my own lack of understanding or Liu’s fiction going off the scientific piste. Liu shifts the narrative and scope by applying quantum theory to the very realm that found  it enigmatic and outlandish—classical mechanics; and plays Heisenberg by rendering the uncertainty principle on a macro scale as something observer-based—a binary, switchable-by-state function. Soon, ball lightning is not a phenomenon that needs a physics solution, and nor is the book an invention story about the very technology which its explanations make supposedly possible. Instead, the whole narrative becomes a Schrödinger’s cat, one that turns definite events into probabilities collapsible by observer-based state functions. This interpretation of quantum mechanics may leave readers in an overwhelming state of “consciousness caused collapse” as well, one in which nit-picking the details of writing and translation are suddenly insignificant.

The book invokes a sense of respect by withholding itself from a lot of temptations in terms of its scope. It keeps its prime focus on meteorology and atmospheric science without indulging in climate change. In terms of genre, if we may consider the book a piece of military SF, it is careful not to even nudge towards the boundaries of space opera. Even while invoking an Interstellar “Murph” moment, it keeps itself in the so-called quantum realm, well away from those crowd favourites, FTL and relativity. Liu’s story is committed to the events described; almost or all of it has a purpose, and the book is keen to attach a scientific aspect to every narrative fragment. Even emotional scenes that might easily get passes have explanatory appendages like, "from the perspective of quantum mechanics, death is the process of transitioning from a strong observer to a weak observer, and then to a non-observer."

This may be best seen in Liu’s tendency to apply deeper meanings—scientific and otherwise—to allegories and seemingly nondescript details long after they first appear in the text. For example, Dai Lin, the pretty girl whom Chen has to ignore during his undergraduate years, is later mentioned alongside Lin Yun’s story, to show how “untethered they are to the their time and to each other” when it comes to their scientific pursuits. In fact, like Luo Ji’s imaginary lover in The Dark Forest, the “girl” can also be viewed as Chen’s own “fridged woman.” The Russian wine story Liu mentions at the start of the book gets same treatment: it effectively conveys the resilient commitment Chen’s mentor Zhang Bin’s research demanded of him, and later also becomes the perfect self-eulogy. Though they aren’t anything comparable to Yun Tianming’s parables from Death’s End, the reader senses Liu testing his style in this book.

All that said, there are things too coincidental even for fiction, and annoyances like characters being too formal, lyrical, or poetic in normal conversations don't help; sometimes, these slips were too conspicuous to be excused even by playing the translation card. Chen, as a protagonist, is always favoured in his quest, with knowledge and people—from academic advisors to military scientists involved in clandestine operations—coming towards him rather than needing to be chased or found. In addition, the very concept of the tangible indeterminate state, and the literal fishing for macro fundamental particles, might feel a little off, even with their attached wow effect. Still, Joel Martinsen’s translation is consistent and very readable; and perhaps this artificial feeling has more to do with the cultural aspects of language than the translation or writing itself.

The beauty of an object can be completely separated from its practical function. Like a stamp: its actual function is irrelevant in a collector’s eyes.

This book is not about collectors, or mere observers who passively enjoy nature and its wonders, but about scientists who want to understand and engineer them to particular ends. In this way, Ball Lightning is a primer, an introduction to the concepts Liu would explore and develop in later books. But the author isn’t shy of making the narrative as brutal as possible here, as well: Chen’s childhood trauma, which drives him in his pursuit of science, the military researcher Lin’s societal detachment and monomaniacal fascination for weaponry, Yi’s dark commitment to physics that renders everything and everyone insignificant; all these can find parallels in the character motivations of the later trilogy. And the antithesis of all of these—the Garden of Eden, a pro-environmentalist terrorist group—is basically a precursor of the trilogy’s Earth Trisolaris Organization (ETO).

The book’s post-Cold War era is also marked by an “anxiety of influence,” a Chinese response to a changing world in which modernity is predominantly western. Considering the period of writing and the historic setting of book, the  consolidation of power on the Russian front after the Federation’s economic collapse during Yeltsin’s presidency and the Chechen wars seems to have been influential in framing  the story’s Chinese consensus: a jingoistic military, a perceived need for a Chinese iron hand, an explosion that stops the war, Cold War politics, Perestroika, boundary conflicts, and a need to establish a modern state reintegrated into the international order, far from the mythical traditions of Empire, are recurring elements in the novel’s alert atmosphere. These concerns are well aligned with the characteristics of Chinese SFF that Xia Jia mentions in her essay, “What makes Chinese science fiction Chinese?” A large amount of Liu’s creative speculation and allegories are derived from the east, as opposed to the post-industrialized or post-war ruminations of western works. Ball Lightning also represents the kind of Chinese optimism Xia identifies—one that dreams of a modern China overtaking the West while still preserving its old essence, developing an alternative perspective on modernity, and China’s dependence, as a nation state, on human ingenuity for prosperity as well as survival.

If you are really able to prove that a super-observer is watching our world, then human activity becomes very indiscreet. [...] You could say human society is in a quantum state, and a super-observer will force it to collapse to a state of reason again.

In the novel’s afterword, it was surprising to learn that Liu had the draft of The Three-Body Problem ready, as a whole series, as early as 2003. Ball Lightning remains his first published long-form work, however, and Liu describes the novel in the same afterword as an invention story, categorizing it as a post-Qing Dynasty Chinese science fiction that is invested more in the immediate effects of a futuristic technological breakthrough than in its later or deeper social implications. He writes that he decided to publish Ball Lightning first precisely because the Remembrance series was more of an effect-based, post-invention story, perhaps less attractive to his putative readership than a story which focused on the invention itself.

Though in this way Liu here canonizes Ball Lightning as a legitimate prequel, and the final chapter teases the same, the novel’s pre-Trisolaran narrative is more than an invention story. It moves parallel with the timeline of the later novels’ Ye Wenjie or Luo Ji, moulds its characters with the same Cultural Revolution, but limits its messages and philosophies to the confines of a planet. And still, it acts as a standalone, an entertainment aware of its own limitations, which ends with the teasing presence of an enigmatic omnipresent observer, who could be whatever you want—including the Trisolarans.

Though Ball Lightning, in its limited scope and ridiculousness, is about macro behaviours of fundamental particles, it in itself is an earthbound microcosm of the Three Body Problem universe, foreshadowing the later-developed concepts with a minimized sneak peak. So do stay in your seat until the post-credit scene, even if you are well off the edge of it, for, let’s just say, the very reason you picked this book up.

Like Loading...
© Copyright 2018 By: Jerry Jose
About Jerry Jose
Jerry Jose is a writer and research scholar based in Cochin. His interests include science fiction, weird lit, graphic novels, and colonial history. Twitter: @jerryjose7.
No comments yet. Be the first!