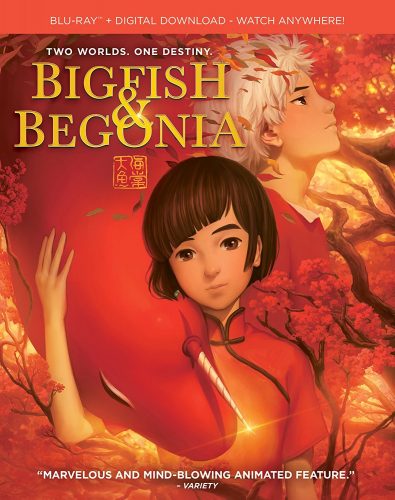 For many critics, the much-anticipated 2016 Chinese animation film, Big Fish & Begonia, has felt like a brilliant morass that steadily resists interpretation. Scenes in the film are made achingly beautiful by a wild sense of invention, so lavish that it becomes unsettling in effect. And the arc of the story--if there is one--has a dream-like tendency for continuous, unrelenting action. The intensity can be discomfiting. As one reviewer notes, "watching it feels a bit like spying on somebody else’s dream."

Fittingly, the idea behind Big Fish & Begonia was conceived during a night’s slumber. When writer and director Liang Xuan woke up one morning in 2004, his mind was impressed by the strange imagery of a fish so prodigious in size that it had nowhere to go in the world, except for the sky. Liang told his business partner and later co-director Zhang Chun about the idea; the latter was immediately taken by it. The fantastical image made Zhang think of "freedom," and imparted a "wondrous sense of time." [1]

For Liang Xuan, the feeling of unbounded freedom was perhaps what he longed for the most at the time. Ever since dropping out of Tsinghua University, he had been besieged by familial pressure and financial constraint, while his career in the animation industry stalled. But his efforts paid off in 2016, when Big Fish & Begonia came to the big screen in Chinese cinemas. Representative of yet another important foray by the country into art and entertainment, the film was immediately hailed as the "dawn of Chinese animation." International release followed in April 2018; a dubbed version of the film became available in the U.S. on April 6, and in the U.K. on April 18. A reporter once surmised that the protagonist in Big Fish & Begonia, a teenage girl named Chun, is reflective of its creator, Liang. Both of them are headstrong; both defy the expectations of their families and communities; and both must confront the consequences of their actions.

In Big Fish & Begonia, Chun lives among a community of magical beings called "The Others." Collectively, they oversee the natural phenomena enacted in the human realm. Chun is destined to inherit the power to regulate the life of begonia trees from her mother, but before she can be considered as an adult, she must leave home for seven days with other youngsters to witness natural laws in action first-hand. Assuming the appearance of a red dolphin in order to traverse the rivers and seas of the human world, Chun embarks on her journey and becomes attached to a human boy. When the boy, attempting to save her from a fishnet, drowns, Chun decides to give up half of her longevity to the entity known as the soul keeper in exchange for the boy’s life. His soul, in turn, comes under her care in the form of a miniature dolphin named Kun. Back among "The Others," Chun must take on the maternal mantle to protect and rear him, until he is big enough to return to the human world. The audience soon learn, however, that the deal Chun strikes with the soul keeper disrupts the delicate environmental balance of her world, initiating an apocalyptic flood that threatens the lives of Chun’s family and community.

The exchange of one life for another is a theme that the plot revisits again and again. Kun loses his life when trying to save Chun, so Chun gives up her future years to redeem him. But when she realizes the consequences of her actions, she gives up her own life to deliver her community from danger. Chun’s death in turn prompts Qiu, her childhood best friend, to sacrifice himself to save both Chun and Kun. These bewildering substitutions perhaps contribute to the feeling of confusion this film imparts. But they also provide a multitude of opportunities for the audience to contemplate the frailty--as well as the extraordinary agency--of life lived in a world of constant change.

Metamorphoses serve as another kind of exchange. In this process, life forms give up their old selves to become something new. Chun’s marvelous transmutation into a red dolphin in preparation for her journey is moving, like many others that come later in the plot. First, Chun’s hands become lined with glistening red scales. Then, she feels the surface of the water tentatively, as a small ripple unfolds under her touch. She enters the liquid substance--and twirls--and her body transforms into a sea creature at last. For a moment, Chun seems to lose herself in the exhilaration of the dance, but her mother, Feng, beckons Chun back, to express yet again a mother’s worry for the journey ahead. The rest of the film will, like this scene, waver between the ecstasy of losing oneself to the elements and the grief involved in that loss.

There is a unmistakable Daoist overtone to this story, not the least because the film references repeatedly Daoist symbolism and ideas (the main characters’ names--Chun, Kun, and Qiu--are taken from Zhuangzi’s Xiao Yao You). Rather, the entire worldview in Big Fish & Begonia seems to be informed by Daoist teaching on the inevitability of change in the natural world. Death, in this sense, is another kind of transformation. When one life ends, another necessarily springs up from its ruin. The demise of Chun’s grandparents, for instance, are recompensed by nature as they transform respectively into a begonia tree and a phoenix when they pass. These transmutations are glorious testaments to the unending fecundity of nature, but also sources of grief for those who are attached to the particular life forms that have come to an end. Zhuangzi works through this paradox in a piece of writing about the death of his wife:

In the end, Zhuangzi decides to resist grief, because life and death are two sides of the same coin. For him to celebrate the extraordinary cosmic exigencies that brought about the life of his wife, he must also acquiesce to her inevitable dissolution, which results from the same, unchanging laws of nature. By the same logic, Zhuangzi contemplates his own demise with an equal sense of equanimity. He dissuades his disciples from giving him a lavish funeral, or burying him at all:

Above ground I’ll be eaten by crows and vultures, below ground by ants and crickets. Now you want to rob the one to feed the other. Why such favoritism? [3]

The sage is nothing if inconsistent. He maintains that the organic materials of life are necessarily reappropriated in the incessant, transformative alchemy of natural processes. Partiality to particular lives incurs unintended but untrammeled consequences in the food chain, and the greater environment beyond. Modern Daoists, guided by the ecological concern in Daoist teaching, are often avid environmentalists.

In this sense, the protagonists of Big Fish & Begonia can be startlingly un-Daoist and un-environmental. Chun, for one, refuses to comply with the laws of nature, which serve also as the rules that govern her community. To counteract Kun’s death and passage back into nature, she strikes her own bargain with the soul keeper, only to precipitate a climate disaster. Chilling scenes of snowstorms in the summer, rising sea-levels and apocalyptic floods ought to remind us of the imminent climate crisis our own world will face. In the end, the course of action humanity as a whole has taken in regards to the environment is analogous to Chun’s choices writ large. Have we not, like Chun, tampered with the laws of nature to render them more suitable to our own purposes? Have many of us not, also like her, placed our own desires over the safety and sustainability of our community? And inasmuch as Chun trades in her future lifespan for present gain, therefore defaulting on her filial responsibility to her parents, have we not also dismissed tomorrow’s concerns for today’s comfort?

But the ethical difficulty of Big Fish & Begonia--the part of the story that resist facile explanations--is that we do identify with Chun and the justice of her cause. If as Dao De Jing notes, that the ways of nature are indeed "inhumane," then we perhaps cannot condemn Chun for attempting to change what is cruel. [4] As David Hinton, poet and translator of Classical Chinese literature, suggests, Lao Tzu himself might have struggled with the conflict between human culture and ethics on the one hand, and natural laws on the other. In Hinton’s words, the sage’s nature-centered philosophy likely forestalled him from developing an actionable and cogent philosophy on "social justice." [5]

That Big Fish & Begonia dares to wrestle with this difficult paradox, in whatever incoherent way it can manage, ensures its commitment to intellectual rigor. Perhaps it falls short of presenting viable solutions to redeem us from the brutal contradictions it discerns in the texture of our lives, but one scene in the film--another of Chun’s transformation--does seem to point us in the right direction. Near the end of the storyline, when she finally recognizes the full scale of the horrors she has unleashed, she makes an extraordinary decision. Chun lets herself fall into the flood, swims with all her might to reach the begonia tree that once was her grandfather. Then, she clasps the roots of the tree and fuses herself with it, as rays of light explode. The tree grows gargantuan, its boughs lifting Chun’s childhood friends out of the water, brushing even against the heavens to shield the earth against the cataclysmic outpouring. Soon, the entire frame becomes filled by the stunning begonia tree that has been exchanged for with Chun’s life. Colossal clusters of pink flowers bloom against the complement of the sunset sky.

Her act of selflessness is succeeded by another. In the penultimate scene of the film, Chun’s childhood best friend, Qiu, imparts his life force (qi) to her, giving her enough momentum to join Kun in the human world. When Chun and Kun appear again, they are both once more in human form, and nude. Newly resurrected, both are still lives-in-nature, unmarked by signs of culture--except for a small pendant around Chun’s neck, which was once a present from Qiu. The exchange of life for life, in this case, was made meaningful by the exchange of a human token, signifying love and friendship. Through this act of self-sacrifice, Qiu affords a harmonization between human and natural exchanges, hitherto estranged.

If Big Fish & Begonia begins as a tale of self-assertion against both the community and the environment, it ends as an allegory for self-sacrifice. Chun recompenses her affront to nature by returning to it, and amends her selfish choice against the community by giving up her very selfhood for its sake. Qiu, similarly, resolves the paradox between the conflicting demands of human justice and natural laws, by offering the dissolution of his very existence. Perhaps this attitude of selflessness, devotion, and service is precisely what we need in this century, our own time of crisis.

Like Loading...
© Copyright 2018 By: Ruilin Fan
About Ruilin Fan
Ruilin Fan is a student of Renaissance drama who grew up in Beijing, China. Her current research interest focuses on embodiment, specifically the relationship between word and flesh.
One comment on “Big Fish & Begonia”

Thanks for researching and elegantly weighing and presenting so much valuable context here! It really didn't occur to me that Chun's cutting off her lifespan was not entirely about her, or that this would present a narrative issue for some audiences because it could leave her parents without her--and that does shift the story. Your structure also affords a great frame, informative frame for your own analysis. The environmental point that observation leads you to, for ex, is strongly delivered.