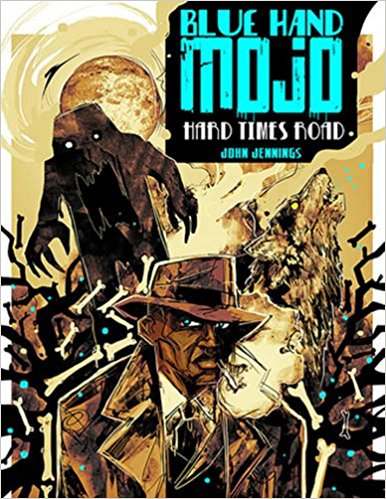 Papa Midnite: You are a magpie of magic. A thief of tradition. You steal from other people's cultures and beliefs to suit your own purposes.

This bit of dialogue, from the ill-fated 2014 TV series Constantine (CW), was the most blunt articulation yet of something that the source material (the original Hellblazer comics) only hinted at: that John Constantine, the comics world's reigning magus, a man who had cheated Satan himself, was, at some level, just another sneaky white dude who had hustled his way to master hyper-local, culture-specific magicks. No matter how many National Front fascists or Neo-Nazi skinheads he brought down, this question of cultural appropriation always hung over the Constantine story. Papa Midnite was a powerful black man in his world, as was Map, the magus of the London Underground. But neither of these characters ever really breaks out of the Diversity 101 template.

This is where John Jennings comes in, with his graphic novel Blue Hand Mojo: Hard Times Road. Jennings’s protagonist and narrator, a black man called Frank “Half-Dead” Johnson, is an Illinois mage or “conjure man” who made a deal with the devil (referred to as “Scratch” here): hoodoo powers in exchange for half of his soul, plus more souls for Scratch to claim. After being marked by Scratch, his blue hand (or “mojo hand”) becomes the source of his magicks—and threatens to consume him entirely, with every new hex it casts.

The setting is Bronzeville, Chicago, in the year 1931. Known as the “Black Metropolis,” this historically significant neighbourhood had one of the greatest concentrations of African-American businesses; and also one of the biggest ghettos in the country. Indeed, at the beginning of the book, Johnson is rather surprised to find a white man waiting for him (“No one that ain’t a Negro […] ends up in the Black Belt unless they need something”).  The book opens with a dream sequence, a nightmare where Johnson sees his family hanging from a tree alongside him, staring at him “through accusingly loving eyes.” This is a striking image, made immensely powerful by the context of the painful history of such lynchings in America. Reading the comic in May, and keeping in mind the differences in the contexts in which the two texts are created, I couldn't help but think also of a similar, and similarly powerful, image in the Starz show American Gods, where the black protagonist Shadow Moon (Ricky Whittle) is hanged from a tree by the cronies of a white brat (who, incidentally, are dressed up like Alex and his droogs from A Clockwork Orange), the Technical Boy (Bruce Langley). The violence on the page or screen acquires an extra hateful edge because of the real-world racist horrors that it draws upon.

The question of race hovers over the book like a wraith, demanding that the reader face uncomfortable questions throughout. Take the case of Sophie, Johnson's “main squeeze.” The two of them have an arrangement: Sophie makes Johnson's tonic, required drinking for someone who has been marked by Scratch. In return, Johnson allows her to draw his blood (“some powerful mojo shit”) for her “passing potion,” which makes her a blue-eyed blonde by day. The reason? Her employers refuse to hire black people. It's an undeniably tragic solution to the problem—Johnson, notably, refuses to sleep with her while she's white.

Although there are tasty glimpses of Johnson's past everywhere that leave you wanting more, the major storyline here  concerns Mac “the Shark,” lieutenant to Al Capone (as Johnson himself was, once upon a time). Mac begs his old comrade for help after his men are being murdered by a monster seemingly made of mud. The monster has the avenging spirit of a young black boy, Red, who was, in turn, murdered by Mac's crew. With time running out for Mac and his men, Johnson has to figure out a way to counter the hex.

The writing style is like a greatest hits compilation of noir fiction: in Johnson's world-weariness, there are shades of Raymond Chandler's hardboiled detectives. In his recurring streaks of downright nastiness—at one point, he is called the devil, prompting the wisecrack “he's much sweeter than I am”—there are echoes of Mickey Spillane. And let’s not forget the accessories: the hat and the trench coat, as well as the undulating cigarette smoke.

It's the artwork and paneling, though, that tie it all together so beautifully. On pages where there is no dialogue (like the first six pages or so), Johnson's narration is kept strictly to the right side of the page, allowing the artwork to take centre stage. With graphic novels, it is vital that the artist's visual style immerses the reader nice and early, and that's exactly what Jennings achieves here.

Jennings's artwork is realistic for the most part, with scratches, scrawls, and shadows drawn, in white and black ink, over the flawless lines underneath. These ink marks give the panels a noticeable dynamism, not unlike Picasso’s experiments with “light art,” wherein the artist drew centaurs and other creatures in the air using white light, leaving the shutters of his camera open in a darkened room. In a book where blackness is such a key theme, it’s natural that the interplay of light and shadow dominates the artwork. Some key panels, like the one where we see Johnson’s deity Noir for the first time, stories-in-flasks sprouting off her like limbs, resemble the silent comics of the 1930s woodcut era (present day for the book’s internal chronology); white lines emerging from a jet black background, as if etched out with a chisel, à la Lynd Ward.

There is a larger point to be made about this style—the ink marks disrupt the “clean” flow of the lines underneath. It's almost as if the artist wants to shake up the sanitized version of these images. Oppressed people all over the world know this battle intimately: the fight to keep their histories free from the sanitizing hands of those in power.

Which is why we need more creators like Jennings, who is a professor of visual studies at UB (University at Buffalo). On his faculty page, he explains what drives him to make the comics that he does:

I began to see that there were a lot of stereotypes in popular serial comics. Even though it’s a hyper-masculine form or genre to begin with, the black male superhero was usually more physical, as far as just showing the body or being depicted as an athlete. You also didn’t see a lot of black male superheroes with telekinesis, or as leaders, or as villainous masterminds for that matter.

It's notable that an iconic character like Black Panther has suffered the ignominy of series cancellation recently, at the hands of Marvel; this despite having a marquee name like Ta-Nehisi Coates as the writer. Some Marvel executives have even whispered that their recent push towards a more diverse comics world has resulted in dipping sales.

To them, I say, hogwash. Read Blue Hand Mojo and weep for what you have allowed popular comics to become.

Like Loading...
© Copyright 2017 By: Aditya Mani Jha
About Aditya Mani Jha
Aditya Mani Jha is a twenty-eight-year-old writer living in New Delhi. He is currently working on Reading Pictures, Drawing Words, a collection of critical essays on Indian comics and graphic novels, to be published by Oxford University Press India in 2018.
No comments yet. Be the first!