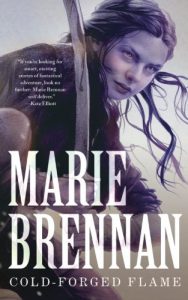 Marie Brennan’s latest novella, Cold-Forged Flame, offers readers of the Lady Trent series a very different path into the author’s work. Tonally, structurally, and thematically, this short novel bears more in common with her earlier Onyx Court series and its dark mysteries of dual and dueling realms. One thing that carries through both series, however, and is evident in this new work, is just how fully realized are Brennan’s female protagonists.

In an interview, Brennan described Ree, her protagonist in Cold-Forged Flame, as a “pessimistic amnesiac … sent on a quest she doesn’t understand.”[1] That self-deprecating reductionism notwithstanding, Ree’s gallows humor and ineffable yearning fairly leap off the page. For a work overshadowed by folktales and infused with mythology, the quality of Brennan’s plotting and wordcraft—lush and dreamy though they are—are not the real stars; Ree, and her universal quest for identity and mastery of her own fate, take that title.

The story opens with “a summons, a command. There is will. There is need. And so, in reply, there is a woman.” This already suggests a gendered power differential, and the group who summons Ree upholds that feeling: they’re vaguely Celtic, with their standing stones and blood magic and moon references; the author makes special note that they are paler than Ree, that there are six men to three women, and that they are led by a man, the Cruais. He is powerful, and his spell has bound her utterly to her task. And yet, he fears her; she has power, too, which is why she has been summoned: the task he has bound her to—retrieving a vial of blood from a sorceress on a magical isle—has swallowed every one of his people who has tried to complete it before her.

Ree is treated like a wild thing, more elemental than person, kept at bay by the iron bars of her geas. As readers, however, we don’t see her in the dehumanized way the Cruais does; the tale is told from her perspective, and we see how much she doesn’t, but wants to, understand, how much she needs to know who she is. We are taken, in other words, on her journey of personhood. Over the story, she becomes more humanized, despite her arcane nature. The Cruais and his people, for all that their need of the blood that powers their magic may be just—with it they hope to prophesy a future for their people that avoids their destruction—are also a weak and frightened band, and in their desperation force someone unlike themselves to take on a danger and risk they cannot bear. They are a pathetic and pitiable people, and never Ree's true antagonist.

Nor is the mistress of the enchanted isle, a sorceress known as the Lhian, Ree’s antagonist; nor is it her demesne that tries its best to hinder or kill Ree. Both pose unique challenges, and stand between Ree and fulfillment of her assigned task, but this isn’t necessarily what Ree wants. Preventing her from achieving that is her very nature: we learn she is an archon, fated to live many lives as variants on the same theme; but each time she is summoned she forgets what came before. What Ree wants  is to know herself—but her memories prove elusive and fleeting. Further complicating this journey are the rules which she's told govern the cauldron of blood she seeks: to get what you desire, blood must be shed; to take blood away, you must surrender what you desire.

It is here that Ree throws off the trope of quest fiction heroine: she’s no plucky adventuress, no lily-white maiden who must learn to accept her own inner strength (think every Disney princess); nor is she the flip side to that coin, the world-weary and jaded termagant who’s seen too much (a la Marion Ravenwood in Raiders of the Lost Ark [1981]). Brennan rejects these tropes with Ree, and offers a more complex and compelling female protagonist whose true conflict has nothing to do with what men do or don’t want from her, and everything to do with her identity as a person. It’s refreshing—doubly so since this is not a heavy-handed moral, but an underlying theme whose significance appears upon reflection.

Ree aside, there are some lovely details in the worldbuilding. Brennan doesn’t have much page-space to develop this world, but there are enough glimmers that readers will be interested to see more as Ree continues her journey in the follow-up, Lightning in the Blood (May 2017). The Cruais and his people, for example—what calamity are they trying to forfend? Why are they hiding from neighboring villages? Or what of Aadet, the man Ree meets on the Lhian's island: the opposite to the Cruais, darker skinned than Ree, sacrificing himself to try to save his people. Ree changes his quest, his entire future, instinctually, but there are hints that the ramifications of that action will be momentous.

Some of the author’s other choices render an appropriately dream-like quality to the enchanted isle. For example, after landing on the island, Ree notes, “while the sun may be rising somewhere, it isn’t here—and may never be.” But if this is a dream, it’s a lucid one, and Ree’s not in control: she realizes “the land can change, she can’t take anything for granted. This is more than just a landscape; it’s a test, one that’s either self-aware or controlled by someone else.” That uncertainty—who’s really in control?—carries through Ree’s sojourn on the island. It would be easy to assume it is the work of the Lhian, but the sorceress has no reason to help Ree, and yet Ree acquires several useful items along her way. First is a sash, spun out of her own blood:

where her hands had been, the moss is now red with blood … And when she touches it, that color comes up in her fingers: a long strip of red cloth. She stares at it, unblinking. The fabric is long and thin, and not raw; someone has stitched it into a sash.

The other items—a coal from the fire that waked her from a choking slumber, and a sword that appears in her hand just when she needs it—are equally ethereal. One might spend an inordinate amount of time wondering about these items, and how they will be used in the climactic scene—that is, after all, what adventurers in fantasy novels do. But they prove more symbolic than physical, representative of Ree and her will to live. They do help, just not in the way one would expect fire, a sword, and a magic girdle to assist the hero; they’re more akin to the messages Leonard leaves on his skin in the film Memento (2000): physical reminders of who Ree is and where she’s been. For a character who has lost nearly all of herself, and whose very volition has been enslaved, these items are repositories for the identity she seeks.

The story is not without its idiosyncrasies. There’s a matchlock pistol, which Ree not only recognizes, but identifies as an outdated firearm. Nowhere else is any post-matchlock technology in evidence, or even matchlock-contemporary technology. So why take such pains to point it out and have the protagonist comment on it? The nod to Celtic traditions is an unnecessary distraction, too; to what purpose are readers given the wrong impression about when and where we are? Ree’s sort-of-sidekick, Aadet, does not do much for the story, either, besides giving Ree someone to talk to. The only things that set him apart from Wilson, the volleyball in Cast Away (2001), are: 1) he allows readers to see Ree’s instinctual molding of a human’s desires and future, setting him on the “right” path; and 2) he provides the route for the author to continue Ree’s story for another volume. The first is useful characterization, but could have been accomplished with one of the Cruais’s people before or after the island. Aadet is not interesting, not yet at any rate; the author appears to treat him in this story much like her Lady Trent treats the men in her life—as a complement, a nice addition, but not, strictly speaking, irreplaceable. Perhaps he will grow in the second volume, but for now he fails to engage.

The cardboard stand-in nature of the other characters is peculiar, considering how interesting and original Ree is. It begins to feel like Ree and her journey were conceived and molded over time, and the trappings of story draped on later as needed. And this is, essentially, what happened: the author adapted Ree from an RPG/LARP character she’d played for years. [2] This is not necessarily a detriment: Ree is fascinating. See, for example, her response to the Lhian offering to give Ree everything she wants: “What stops her is a pure, searing refusal to accept her own soul from someone else’s hands. Fuck her, and fuck her 'gifts.' I don’t need her help, or anybody else’s. If she offered this to me for free, I’d throw it back in her face.” That’s the kind of fierce, unapologetic fire we so rarely get to see in female protagonists. The ending very much left me wanting to see what happens to Ree next; I just also want to see more depth to the characters caught in her orbit, and a little more concinnity in the worldbuilding.

Like Loading...
© Copyright 2017 By: A. S. Moser
About A. S. Moser
A. S. Moser is a writer and teacher. His current project is a near-future novel about rising seas, the collapse of currency, and smuggling. For more, follow him on Twitter.
No comments yet. Be the first!