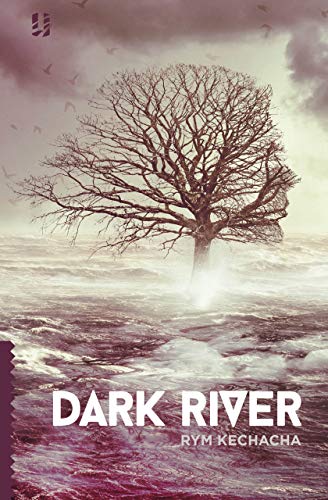 In February this year, Wired magazine ran a piece about the growing trend of “doomer lit,” a genre that features the death of hope as humanity struggles futilely against climate change. I confess, it was neither a genre I had read nor one that I felt particularly drawn towards.

Rym Kechacha’s Dark River is the epitome of doomer lit, told in two parallel tales that almost—but don’t quite—intertwine. It features two sets of sisters, from apparently different worlds, who must uproot themselves and travel across forbidding terrain to a place where they believe they will be safe. We not only follow their steps, but also the thoughts of the two primary characters, Shaye and Shante. Everyone is viewed through their eyes only, in a way that makes each story deeply personal to them.

The novel has a depth and complexity that lifts it beyond any simple labelling. There are no monsters to battle and no epic climaxes in this book. Rather, we are given a masterful insight into relationships: the mother/young son, woman/lover and sister/sister. A constant theme throughout the book is abandonment. In both tales the primary male figures are absent.

For example, the relationship between men and women is examined, but in an unusual way. Most fathers in this world choose to abandon their daughters, refusing to help them travel to safety and in so doing depriving them of their knowledge and wisdom. In both the cases we observe in the course of the book, these decisions appear selfish but can also be seen as the inevitability of the breakdown of the daughter and father relationship, where the daughter must move away from reliance on the father figure, instead taking on the role of leader herself.

The partners of both of the primary female protagonists in each tale are also absent from the beginning. Consequently, when their journeys begin they are as much about finding their partners once more as they are about survival. In both cases, the men have left to provide for their families, but in doing so have moved themselves into a place of safety. The women are the ones left behind, who must bring the young, the old, and all the others to join them. Here, both men have abdicated their part in the physical saving of their families. This leaves a sour taste in the mouth of the reader. The men have saved themselves. They may hope the women will come, but they do not venture out into the world to save them.

This can be read as a hymn to the strength and ingenuity that women can find within themselves in times of emergency—how they are, at heart, the fierce protectors of their tribe when called to action—or it can be taken that it is the role of menfolk to be more privileged. One man leads a valued professional career, while another is the only one who can initiate lovemaking in the partnership. In very different worlds, the men can be outwardly perceived as the most powerful, but it is the strength of the women that is displayed throughout the story. This sense that, ultimately, the women of this novel are always alone is echoed in both mothers mourning the growing maturity of their young sons, who become increasingly less reliant on them.

However, this is not a book about the superiority of women or the inferiority of men. The absence of the men allows Kechacha to focus completely on the women and their stories. Dark River proves instead to be about what women must and can achieve by themselves.

The story starts in a nomadic pagan setting when Shaye, her young son Ludi, and her pregnant sister Gai Gai are preparing to leave for the sacred Oak Grove to perform a yearly ritual of sacrifice to the spirits of the world. Their existence relies on the nature they worship, and it has clearly gone awry. The seasons are out of balance, the river is overflowing, and the water tastes “sick.” With the young men having not yet returned from a hunting trip, the women, children, and old men are encouraged by a visiting wiseman to come to the Grove early.

This opening spends a lot of time building Shaye’s world. There is much description of the fields, the river, the available food, and the ways this community sustains itself. The tribal system is unremarkable, and for a time I did wonder if this was meant to be a post-apocalyptic real world or in fact a fantasy one. We learn about this community’s beliefs, their relationships, hopes, and fears by observing the daily minutiae of Shaye’s people; but this threatens, at some points, to tip into mundanity with achingly detailed descriptions even of daily chores.

What saves this from becoming no more than dull tribal fantasy is that during the ordinary day-to-day exchanges, the complexity of relationships is built with a masterly hand. We might think we are reading about a foraging trip, but in reality we are learning how Ludi’s growing independence pierces Shaye with as much sorrow as pride. Slowly and inexorably, Kechacha shows us the nature of the relationships between members of the tribe amid an atmosphere of rising tension and uncertainty: the river is rising daily and Shaye’s people are forced to move before the hunting party has returned.

Intercut between Shaye’s story is the tale of Shante, her young son Locke, and her sister Grainne. The decision to give these three characters not just similar roles to, but names with the same initial as, Shaye’s family is perhaps too obvious. It sets an expectation of a bridging of the two tales that never materialises. In fact, the novel establishes the distinct possibility that the two women are present on the same planet—but in very different areas or times. I found online reviews that suggest their planet is Earth, but that the story happens many millennia apart. This is also cited in the book description on Amazon and Goodreads, but it’s never made clear within the text of the book itself. The reader must deal with their expectations—or perhaps their confusion—alone.

Despite this, the stories shadow each other, and on occasion it feels as if the author shoehorns the plot to make them fit. Although the family roles are the same between the two groupings, the characters of the women differ mainly in the role of Grainne, who is more selfish and thoughtless than the corresponding character of Gai Gai. Gai Gai is younger, less knowledgeable, and less mature than Shaye, and towards the end appears to be more fortunate than her older sister, but she lacks the ruthlessness that Grainne will display at the end of Shante’s story. Both groups, meanwhile, find dead bodies that have been overcome by nature; both reach their destination and both, in their own ways, ultimately fail as devastating blood sacrifices are demanded of the viewpoint characters.

There are contrasts, too. If both Shante and Grainne make foolish decisions which reflect the fact that they are completely out of their depth, then Shante—a competent, modern woman who is lost in the wild lands—is compared implicitly with Shaye, who is a child of nature. Elsewhere, Shante and Grainne, abandoned by the father they believe had the knowledge to survive in the world, find themselves praying to the trees in desperation— mimicking the pagan beliefs of Shaye’s world, and they appear to be rewarded when rain falls and saves them from dying from thirst.

Throughout, too, both Shaye and Shante are driven primarily by their love of their sons. The mother bond is shown to be the strongest of all for the women. Nevertheless, Shaye and Shante’s other motivations are different, with Shaye being the more compassionate. Shaye does her best to save everyone; the more “modern” Shante is mostly concerned with saving her son, and to a lesser extent her sister. Both women will come to realise their world is ruined. Shaye sacrifices everything to save it, but Shante’s focus is on survival for her family above all else. She sees no way, and makes no attempt, to cure the ills of her planet. The devastation that exists is, to her, irreversible.

This novel explores so many themes that I feel strongly that the beliefs and attitudes of the reader will cause each to take quite different thoughts away from it. It is undoubtedly a deeply disturbing book. This is made all the stronger for the largely gentle way in which danger and despair rise, rather like the waters of the river of the title, leaving both the reader and the characters overwhelmed. I spent many days thinking about the story and, even now, there is a flutter of uneasiness lodged within me. As I write this, that feeling of uncertainly rises uncomfortably within me. If you judge a book by what it leaves behind, then this is a great novel.

There are flaws—in the plotting, and even in the overtly melodramatic endings. The appearance of bandits, who hijack Shante’s train to the higher lands, and their failure to notice the single passenger car, or display any sign of their existence to the characters—except for leaving the body of one dead guard behind—stretches credibility. The decision of the women to leave the train and trek across the wild lands, fearing they may be blamed for the attack, does not work. But the novel still leaves an indelible stain on your soul. The language is lyrical in places and always written with a certain and sure hand. Undoubtedly, Dark River leaves more questions than answers behind it. At its end, I was overwhelmed by the hopelessness of it all and deeply disturbed by the central characters’ fate—which means, of course, that Kerchacha has the skill of making you care.

If I had known how the story would play out, would I have read this? No, I would not. This, more than anything else, should tell you how very powerful this book is.