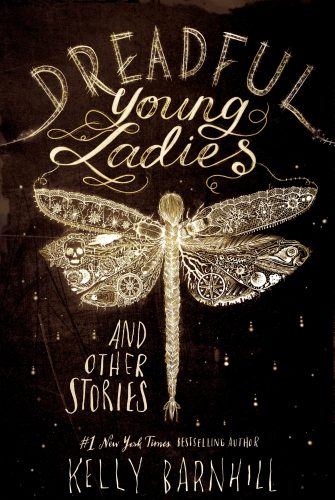 Kelly Barnhill writes fables. She has written fables for years, starting with children’s books like Iron Hearted Violet (2012) and heading into more recent publications like the Newbery Medal-winning The Girl Who Drank the Moon (2016). There’s no indication she will stop writing fables. That is a blessing, but, in classic fairy-tale fashion, it can also become a curse. Dreadful Young Ladies and Other Stories—her first full-length foray into adult literature—captured my attention and ignited me with its humorous, mystical prose, but suffered a slump of poor tales midway through, in part because of the limits of the fable form.

These nine fantastical stories talk about the magic present in relationships, and how sometimes others misinterpret either the relationship, the magic, or both. The collection opens with “Mrs. Sorenson and the Sasquatch,” a cottagey, pure-hearted tale about a widow’s secret love with Bigfoot himself. It takes weeks of investigation and random encounters for the townspeople to discover and react to the interspecies romance, but readers can start to put the dots together from the title. “The Insect at the Astronomer: A Love Story,” has a similar plot, this time about an adorable insect—perhaps my favorite character of the book—being drawn into a relationship with an Eldritch creature that takes the form of a human astronomer. Once the cosmic horror of the whole wonderful piece had concluded, I was left unsure as to what kind of relationship budded between them, but I was for it.

Other stories offer different combinations and types of love: a tight-knit family with an invisible daughter, a one-sided romance between two schoolkids, a period-piece marriage that has some misunderstood apparitions underneath its surface, and more. These are lovely concepts, and are set up well. Barnhill has a lot of balls in the air throughout these stories, so she keeps the prose forthright and specific without sacrificing much of her writing’s poetic qualities. Barnhill also employs a lot of prophecies and patterns, just like in classic fairy tales. This meant I saw a lot of the story twists coming, and enjoyed watching the characters react to new information, like the townspeople with the sasquatch, but some of the tension of the story was lost with this method. The prophecies were hard to get excited about because they removed a bit too much agency from the characters. Other stories further removed agency by selecting protagonists like ghosts or dolls to follow, a risky move that a few times simply didn’t work.

I’m so glad the VanderMeers helped get Barnhill into the industry by publishing “Elegy to Gabrielle: Patron Saint of Healers, Whores and Righteous Thieves” in their pirate anthology (Barnhill is glad too, thanking them before anyone else at the end of the book), but as I read the story here it felt like the weakest in the entire collection. The fairy tale focuses on Gabrielle, a magical child, and her rebellion against the dastardly Governor. “Elegy to Gabrielle” begins with a “curator’s note” describing how the following narrative was supposedly found, grounding readers but also revealing what will happen to the narrator. Gabrielle is introduced with another prophecy, and this is then followed up with page after page of summary and half-scenes. Readers are never left in locations or conflicts long enough remember the order of events or see some specific, interesting moments Barnhill hints towards.

After Gabrielle frees a slave ship, the Governor “sent interrogators, spies, and thieves into every home in the town, and while no one knew what had happened or why, everyone commented on the strange, beautiful little girl riding a mongrel dog” (pp. 106-107). That sounds like an amazing premise I would gladly see as an apprehensive, espionage-heavy scene, or even a more detailed summary, but instead this sentence is kept as a bullet point instead of a point of tension. The pace moves in a too-quick, stilted fashion when it could have stretched out its swashbuckling plot into a novelette or novella, as Barnhill does with another magical child story in this collection, “The Unlicensed Magician.” These problems with precis and tension are most apparent in the middle of the collection, in pieces like “The Taxidermist’s Other Wife,” which carries a great sense of momentum but not a full arc, or the title story, originally published in Shimmer, which felt rushed after many reads and gave me the impression that it would be better read aloud.

So I downloaded the audiobook, and soon had the English accent of audiobook narrator John Lee streaming through my headphones. Given the themes and protagonists, I did expect a female narrator, but John Lee did a fantastic job embodying the storyteller archetype that traditionally pairs fairy tales. His flow and cadence helped with the uneven pace and enlivened the entire collection. Barnhill’s structuring of these stories—demarcating chapters with timeframes or numbers, using italics in creative ways, adding cute footnotes—indicates her dedication to the written form, but I think this collection is best when it is read aloud, either through earbuds on a commute or around a fireplace late at night.

Whether read or heard, however, there is a lot of warmth in these stories, both in the attitude of characters and Barnhill’s voice. Sometimes conflicts originate from quintessential Disney-like villains (see: the Minister, the Taxidermist, or the aforementioned Governor), but often these stories are just full of misunderstandings and misperceptions without any ill will. Characters never lie for malicious purposes, only to protect their families. Bad husbands aren’t abusive or evil, they’re just distant or the wrong fit for their partners. Whole communities help out young moms and weird widows however they can. And yes, there’s one exception for all of these cases, but those are twists for you to discover. Barnhill’s voice is a welcome one in speculative fiction’s long dialogue with violence and grimdarkness; her perspective seems to fit with the kindness and feminine power of speculative authors like Samantha Hunt and Carrie Vaughn.

Indeed, Barnhill’s energy often melts off the page. She had fun writing these stories, and that makes me have more fun reading them. Describing townspeople trying not to see Bigfoot’s penis, Barnhill writes: “they knew it would only take a stiff breeze, or a sudden movement, or perhaps the presence of a female Sasquatch to cause a, how do you say—shaking of the bushes, as it were. Or a parting of the weeds. People kept their eyes averted, just to be safe” (p. 25). Writing about a dark tower reminiscent of Jeff Vandermeer’s in “The Situation” (and of another series themed around a dark tower you can probably name), Barnhill says: “The tower had hollow walls with a complicated network of steam pipes, humming engines, tiny levers, and delicate gears. There were dumb waiters and smart waiters and waiters of unknowable intelligence. There were automatic ottomans that rolled toward any visitor who needed to put their feet up for a moment or two” (p. 156). C’mon, that’s real fun.

When our protagonist loves a poet in “The Dead Boy’s Last Poem,” she “came home with sonnets scribbled on her arms, first drafts villanelles veining their way up her lilied thighs” (p. 57). Whole pages on this book had me smiling at parts like these, especially when Barnhill plays with magic systems and unique set pieces. Even where Dreadful Young Ladies faltered, the prose and descriptions glinted its way through and lit my way towards the final third of this book. After my favorite piece about the Insect and the Astronomer, Barnhill ends the book with her 2016 World Fantasy Award-winning novella, “The Unlicensed Magician.” The novella goes by quickly, starting with alarm clocks awakening members of a small town and building in a hundred pages to a fight scene that feels like a mash-up of FX’s Legion and Disney’s Snow White.

The world of “The Unlicensed Magician” is laced with creative uses of both love and masks that only gain more and more significance as I read about the members of the small town and the totalitarian state they live under. Our protagonist, a young magician hidden from the despot’s grasp, is constantly giving her allies gifts, from a “picture frame that would show the face of the person the holder missed most” (p. 253) to a song about her clone chickens: “'My Midge, my Midge, my Midge.” And she kissed each one on its ruby wattle and was, by all reckoning, the happiest girl alive” (p. 247). This is a simple story about resilience, memory, and an innocent girl’s place in a battle of good versus evil, but that doesn’t mean readers won’t fall for the characters along the way—and feel for them when they are threatened. The novella concludes without tying up every loose end, but it is perfectly satisfying and a restful beat to end the collection on.

If you’ve read Barnhill’s novels, you are not prepared for this collection, both in terms of its subject matter (sometimes absolutely terrifying) and her style (she specifies in the acknowledgements how she flexes very different muscles when she writes stories compared to novels). Still, it is easy to see how her work with fables has continued into Dreadful Young Ladies. I hope to stay vigilant and see how she develops her adult style further, hopefully with longer, more complex stories that can evade the weaknesses evident in this collection, but which nevertheless still feature the wholesome cast of characters she has created here.

Like Loading...
© Copyright 2018 By: Pearse Anderson
About Pearse Anderson
Pearse Anderson is a speculative writer and environmental photographer. Previously he has interned at Tin House Books, attended Iowa’s Young Writers program, and frequented the VanderMeer’s Shared Worlds worldbuilding camp. More of his writings and photos can be found at pearseanderson.com or on his @pearseanderson Instagram.
No comments yet. Be the first!