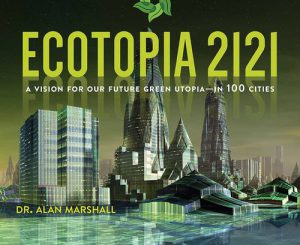 In an era where the presentations of disaster in film and fiction have become routinized to an extent where they seem celebratory, there is something inherently heart-warming about a vision of a hundred future cities that are not dystopian. Such warmth is the expectation raised by Alan Marshall's book Ecotopia 2121. Published by New York's Arcade in hardback, the book is described on the publisher's webpage a "lushly illustrated vision for a Green Utopia" celebrating the 5th centenary of Thomas More's original. The book has even picked up an award at the Green Book Festival in the Future Forecasts category. On the linked website, www.ecotopia2121.com, one can get a sample of the whole project, in terms of blog posts and snippets. The book itself is a companion to a course at Mahidol University in Thailand, run by the author.

The idea of green utopian cities, or ecotopian cities, is nothing new. Science fiction authors, visionaries, and authors have imagined such fascinating experiments in green living for a long time, from Ebenezar Howard's Garden cities in the late 19th century to Paolo Soleri's Arcologies, conceptualized in the late 1960s but on which work continues, even today. In the recent past, such projects and visions (several of them the legacy of "counterculture" green movements in places such as California which also gave rise to Ernest Callenbach's 1975 novel Ecotopia, in which the word was coined), via discussions on sustainability and resilient architecture, have assumed an urgency because they offer a promise of difference amidst the general doom and gloom of planetary boundaries, environmental disasters and seemingly inevitable collapses of the world order. There is much to appreciate in the promotion of a simpler lifestyle in many of these movements, even though the technopaganism and "new age" feel that many of these visions and projects are intertwined with can make one cynical of the overall game. This is indeed where many ecotopias or utopias fail, because they are based on extrapolations—transforming the biases of the lifestyles of the present into the transformed lifestyles of the future. In such cases, the spectacle of collapse or crisis for the utopist/ecotopist necessitates the adoption of a different kind of lifestyle: the utopianism springs from horror of change and nostalgia for the changeless present. This is different from the utopist adopting any actual lifestyle change in the present that forces a radical disruption of underlying systems of patterns of resource exploitation and consumption that may lead to a better world. In this latter kind of utopianism, change is necessary because it is good, not vice versa.

The execution of the ecotopian project in this book is fundamentally flawed. The book does have a few good points. A handful of the 100 images of future cities that the author and other artists have put together are great to look at—as this is a coffee table book the images are likely to be the most appealing part for those interested in merely scrolling through the landscapes. Then there are the many technological concepts that abound in the book, which, while familiar to all those who are interested in sf and future technology at even a rudimentary level, nonetheless are always fun to come across almost in a nostalgic Jetsons-esque way.

Beyond the whole wow factor of the images of lush futuristic cities, the book is for the most part rather naïve, generally facile, and often cliché-ridden. In the introduction, the author makes two broad claims about the method of speculation utilized in the book, and a disclaimer about the style employed. In terms of method, while not getting into the question of realism—which is not the goal of speculative scenario building in any case—the author claims, first that the explorations of the futures that he has depicted are "heavily reinforced with scholarly exploration," and, second, that as the book is a "journey through space and time," he has drawn upon history: "the stories I've taken from history are those expressed in shared historical narratives" (p. xv). In terms of style, the author says that the purpose of his experiment is to throw into relief "our own assumptions about better tomorrows" (p. xv), and that utopias are employed by authors to criticize aspects of their contemporaneous society, "cloaking their visions in both hope and satire." Claiming that these are the impulses that run through his own work, he continues, in the same vein:

I'm hopeful my own head won't end up on a pike. However, it should be acknowledged that within many of the cities explored here, especially those without democratic rule, any public call for alternative forms of governance is either frowned upon or, indeed, infringes upon one or another law. In the course of my research, I've visited many of the cities included here—and I've lived and worked in quite a few of them, too—but I'm sure the reactionaries in many of them would not invite me back should they chance upon some of the scenarios expressed in these pages. (p. xiii)

Now humour and satire are fine tools, but their worthiness and suitability depend on the target, and whether or not they rely on a form of caricature that can at best be considered patronizing. Writing about Moscow for instance, this is an example of the author's humour, because obviously, Russians are used to aping Western Europe and travelling really slowly:

If Russia's mimicking of the West's aerospace projects keeps resulting in gigantic mess-ups, perhaps we should fear the reestablishment of an airship fleet in Western Europe, in case Russia copies the idea and some mighty Hindenburg-type explosion is the upshot. However, given the simplicity of the design and the abundance of Russian gas, the Russians may in fact succeed in building, by 2121, a fleet of transcontinental airships to replace their expensive and unsafe jetliners. They are quite slow, but most Russians are used to taking days to cross their nation anyhow, on overnight trains like the Trans-Siberian Express, so an airship that takes the same amount of time might still be commercially viable. (p. 122)

In similar fashion, the author imagines a nudist ecotopia in future Goa, because well, it's India, the land of perennially naked vegetarian yoga hippies:

Apart from the beach life and hippie culture of Goa (which is readily apparent even today, in the early twenty-first century), one of the reasons social nudism finds acceptance here is its historical precedent. In the fourth century BC, Alexander the Great traveled to India and found wandering groups of naked holy men, whom he dubbed "the naked philosophers." Christianity, as well, has been more accommodating of nudity in times past, so even the Catholic Church might be able to tolerate it, especially when it realizes that many naturists are not only strongly spiritual but also committed Christians. Nudism and naturism also advance the values of vegetarianism, teetotalism, and yoga, which are already well respected in most parts of India. (p. 76)

These are just two examples of the author's "reinforced . . . scholarly exploration" and "shared historical narratives." I could cite multiple similar examples whenever the author believes it opportune to employ some tired cliché about Asian, Latin American or African countries (a close look at the authors sources show a rather liberal use of media articles, and that the bibliography itself lists the same texts a number of times—for instance Arthington's Environmental Flows seems to be the author's source for "data" on a number of cities), but also to be noted is the fact that these attempts at humour are by no means uniformly spread across geographical space, but only employed at certain targets. These bizarre attempts at humour mask a deeper problem, namely, the author's way of conceptualizing cities as altogether separate entities from the global networks that they are a part of, and consequently, there is no discussion of resource consumption in terms of globalized exploitation and resource transfer. For instance, when the author imagines a future Namibe whose ships carry Angola's mineral exports he does not seem to consider the colonial history of the exploitation of Angola, or more pertinently, the environmental impact of shipping—even as today many of the world's bulkiest transactions happen through searoutes and cause some of the most damaging environmental pollution. What causes environmental damage in China (the author unhesistatingly uses the Communist government as the scapegoat—I had several moments reading this book when I thought I was reading cold war era propaganda lampooned; p. 270) is as much a product of environmental regulations there, as it is of unswerving consumerism in the rest of the world. "Designed in California, Made in China" electronics serve neither the ecotopian ideal of a California or a China. Depicting individual cities without this consciousness of embeddedness to serve a myth of self-sufficiency is unadvisable, especially as the solutions we need to seek for the environmental crises facing us are global, while being aware of local problems. It is odd that an expert in ecology would not consider that the problem of a Shanghai is part of the problem of a London and a Dubai and vice versa, in global networks of textile, electronic, food and indeed any kind of trade. The elisions are at times even more jarring. Of the Arab nations, only the UAE finds a proper mention, and there are 5 cities in the entire African continent. The absence of cities from the major Nordic countries, whose investment in green energy and commitment to climate change in the present is worth discussing for any ecotopian perspective is another such glaring absence. How can there be apples in these ecotopias if we do not consider the decline of bee populations around the world?

I must add that all these are not problems exclusive to this book, but often to be found in some varieties of futures studies which take a simple extrapolative approach based on technological change rather than working with more modern frameworks of complexity and interdependence of the globe. These visions of future cities are presented like isolated blips on a global canvas, meant to reinforce the biases (including the techno-colonialist biases) of the present as the inevitabilities of the future. Such a perspective is easy too, because complex social problems can be elided with the promises of enchanting technology. In the whole volume, there is no space given to race or religion (even though the author finds it convenient to bring up issues such as caste in the case of Mumbai and the Roma in Sinaia as examples of his social commitment to equality. Commitment at a distance is clearly easier than bringing up questions of the treatment of minority populations in the more geopolitically dominant countries in what the author calls the "West", repression of certain religious groups and ethnicities in many parts of the world, and so on).

Extrapolation that ignores the reality of exploitation can never envision a true utopia or ecotopia but can at best be a parody of attempts to envision real solutions to problems. We need good ecotopian thought and ecotopian speculation, but this is not it. The book's attempt to make serious points in the garb of trite humour (for instance "gay Shanghai", pp. 211-213) or outlandish attempts at fiction (for instance, the engagement with extraterrestrials in Mountain View, p. 124; the "Wild" feminism of Resistencia, p. 191) do not work either as fiction or speculation. This is an attempted fluff piece with the occasional interesting art, not a pop dissemination of possible solutions to contemporary climate change/environmental issues, nor an attempt even to review with any seriousness the patterns thereof, so if that is what the reader is looking for, the reader should turn elsewhere.