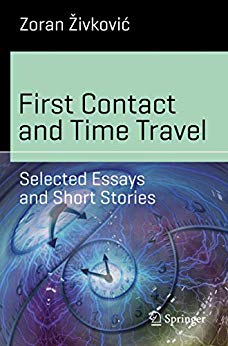 This collection of fiction and nonfiction by acclaimed Serbian author and professor Zoran Živković is the latest in Springer’s Science and Fiction series, born out of the “recognition that scientific discovery and the creation of plausible fictional scenarios are often two sides of the same coin.” Written by both scientists and writers of hard SF, the books in this series attempt to blur the border between science fact and science fiction so that future authors and scientists can continue to draw inspiration from one another.

First Contact is unique in the series in that it includes both essays and short fiction by a single author. The former, according to Živković’s preface, come from his 1979 master’s thesis (“Anthropomorphism and the First Contact Theme in the SF Works of Arthur C. Clarke”) and various magazine publications, while the latter are drawn from his story collections, which have been published in English, most recently by Cadmus Press. This juxtaposition (and the fact that the nonfiction comes first in the volume) encourages us to think about how Živković was influenced by science fiction and in what ways he used that influence to create his own fictional worlds.

Živković’s approach to Clarke's fiction is like that of a skilled surgeon to a patient: careful, attentive, and focused. Under the scalpel are “Report on Planet Three” (1959), “Crusade” (1968), “History Lesson” (1949), and the novella “A Meeting With Medusa” (1971), resulting in the conclusion that Clarke resisted anthropomorphism in his attempts to imagine “realistic" first contact situations. For Živković, Clarke’s work offers:

a kind of anthropomorphization of an alien entity from the perspective of the narrative voice that does not imperil the coherence of a work. This appears in those works in which the author uses the alien as a mirror, and in which the nonhuman character does not have an independent status but exists only because, through its mediation, one can make a statement about people. (p. 4)

Živković analyzes these texts by undertaking close readings of passages, and considering how certain stylistic moves enabled Clarke to manipulate narrative perspective in order to preserve distance between the human and the alien. As Živković notes, these are really stories about humans, after all. His discussions of these four texts suggest that Clarke was using various perspectives in different stories in order to test out ways of looking back at his own species, whether through a report about Earth by a Martian scientist, the “thoughts” of an organic electronic intelligence, an attempt by Venusians to understand Earth history via old films, or the exploration of Jupiter by a half-man half-cyborg.

Three other essays explore the themes of utopia (“Utopia in Arthur C. Clarke’s Childhood’s End”), time travel (“Chronomotion”), and labyrinths (“The Labyrinth Theme in Science Fiction”),  and it’s the latter two that lie at the foundation of Živković’s own fiction.

Of the four works of fiction included in First Contact, only “The Bookshop” and “The Puzzle” take up the theme of first contact, while the longer “Time Gifts” and the final story, “The Cone,” explore the paradoxes of time travel. In “The Bookshop,” the owner of a sci-fi bookstore is writing his own fiction on a slow day when an odd custumer comes in asking for a very new text. In fact, it’s so new that it hasn’t even been published yet. The dialogue (which takes up most of the story) eventually reveals that the customer is no ordinary customer and the story that the bookstore owner was working on has touched a chord in an unlikely place. “The Puzzle,” too, imagines what first contact might be like for a retired astrophysicist who has given up on the hope that alien intelligences might contact humanity. Nonetheless, a random concert in the park one day inspires him to paint a series of abstract pieces that … might form a message from another world?

“Time Gifts” and “The Cone,” meanwhile, are more interested in how individuals might act when confronted by the suggestion that time is not necessarily linear. The former, which is split into four mini-stories, introduces us to a shadowy figure that may or may not be the devil, who visits people throughout history who have been abandoned, forgotten, or persecuted. In offering each of these people a way to “see” into the future, the devil figure raises questions about how even observing the far future or far past might change the timeline, and about whether or not there are multiple timelines. “The Cone,“ however, focuses on a version of the paradox that Živković keeps coming back to: what if you went back in time and met your grandfather? In this story, a man meets not his grandfather, but himself from the future:

It might have been my imagination, but his voice seemed to tremble slightly, just like mine on the rare occasions when I am excited. He extended his hand and I took it in mine—a slim, bony hand, just like mine will probably be when I reach his age. (pp. 145-6)

Like some other characters in this collection, the narrator here knows that something temporally strange is happening, but can’t quite figure out what. The paradox of time travel is thus presented in stark terms that underscore Živković’s point that it is simultaneously fascinating and impossible.

Živković’s fiction is recognizable from the first sentence, with its characteristically distant narrative voice, nameless (and ultimately flat) characters, and extensive dialogue. These stories give you the sense that they are really mathematical formulae masquerading as fiction. While that may be the kind of story that some readers enjoy, I personally have always felt frustrated when reading them (and I’ve read three of his collections). He brings up interesting paradoxes and proposes intriguing thought-experiments, but these texts are really thinly veiled meditations on metaphysics. This means that collecting his fiction and nonfiction together in this way makes some sense—and, if you enjoy this kind of writing, you'll definitely want to check out First Contact.