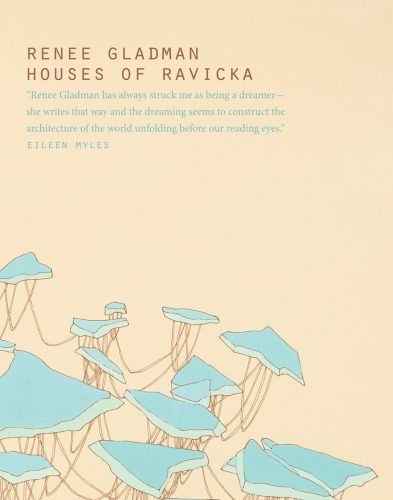 “What if it was raining and snowy and sunny all at the same time?!” my four-year-old asked eagerly on a recent drive home. Before I could do any more than agree that this would be wondrous, she moved on to wondering, “What if the houses were right in the roads?!”

Speculative fiction has a few different ways to answer these questions. One approach to such unusual weather would be to dive into meteorology, conjuring a machine, or an entire world, in which rain, snow, and sunshine are produced by the same natural effects (this imaginative creation might draw inspiration from New Hampshire, where I am learning that such weather does occasionally appear). Another approach might be to tell a story of weather gods, stumbling through the sky—personifying these apparent contradictions, rather than seeking out the physical conditions which produce them.

Still another approach, that taken by Renee Gladman in her stories of the shifting houses that make up the city of Ravicka, involves a bureaucrat, the city’s one and only Comptroller, invested with authority by “the ticket book in my pocket, my stripes” (p. 64). She has written a book, Breaking and Entering, and is armed with trusty measuring devices like a ruler and a plate-frag patometer.

I didn’t get a chance to try any of these three explanations before my daughter was off on a different tangent, but I did find myself thinking of Ravicka, Gladman’s invented city where the houses do wander. What if they drift into the roads? The central mystery of Houses of Ravicka is a house which does not exist where it is supposed to. A house that is linked to another, far across town, which is exactly where it should be, but invisible. The Comptroller of Ravicka is responsible for solving this puzzle.

Gladman’s book exists in the space carved out by those writers such as Basma Abdel Aziz in The Queue (2016), or Kafka in The Trial (1925), who have reacted to the ways in which forms, filled out in triplicate, can reshape lives and landscapes—especially in a world in which maps remain a tool for dominance and control. Generically, then, Houses of Ravicka is drawing from magical realism. Formally, it is three short stories, packaged into one slender volume. The first (and only story published on its own) is by far the strongest of the three, a captivating and mysterious introduction to the Comptroller, the mysterious city of Ravicka, and the problem of No. 96 in the Skülburg.

“The thing about numbers is that they aren’t supposed to be arbitrary: a number is given to a thing so that it can function within a system of ascension or it’s converse,” the Comptroller thinks (pp. 9-10), while laying out a journey to a particular house number on a given street that will still require specific measuring devices and will be valid only along certain routes:

“when you decide to conduct a geoscog, everything you do from that moment on contributes to your result, and that is why the calculations must be impeccable. That is also why you must follow a prescribed route to your place of study. I could not walk down Hvarsaan to get to no. 33, though this would be the most efficient way.” (p. 40)

In this first section, the Comptroller is certain of the rules governing Ravicka, its moving landscape, and her (important) role in establishing the layout of the city, yet those rules fail her.  While going about her business increasingly desperately, the Comptroller meets the residents who actually live in Ravicka, who often seem bemused by her exertions. The result is a story of the limitations of authority and certainty, the people who live within systems, and those who define themselves by them.

Gladman writes at the end of the book that she lost her way for a while as she wrote the story that became the middle section of Houses of Ravicka, and, unfortunately, this is quickly apparent. This middle sections relates a surreal walk and conversation shared by the Comptroller and one of their more annoying friends. I appreciated both its occasional bursts of humor and its unwillingness to be constrained by gender identity, but the story itself lags. Where the first story builds towards a climax, if not a conclusion, the middle section of Houses of Ravicka meanders through various landscapes before ending up nearly exactly where it began. After the promise of the opening, I was desperately awaiting a reason to care about this encounter, but alas, this never came.

The conclusion of the novel, on the other hand, is formally satisfying, but generically frustrating. Gladman’s first-person perspective shifts from the figure of the Comptroller to the inhabitant of the invisible (but extant) house No. 32. Here, we learn some of the history of the city of Ravicka—how the buildings began to move, and what lies literally beneath this mysterious shifting city. Having grown up with a fantasy tradition that grounds questions of kingdoms, weather, and shifting houses in the history that came before, I appreciated this section. Much as, in Tolkien, the sight of Moria gives a view into the dwarven kingdoms of old, the conclusion of Houses of Ravicka illuminates the history of the ambulatory dwellings, demystifying some of the confusion in the first section.

But it is precisely this demystification that is so generically unsatisfying. In his 1982 Nobel speech, Gabriel García Márquez spoke of magical realism and the upheavals of Latin America:

Poets and beggars, musicians and prophets, warriors and scoundrels, all creatures of that unbridled reality, we have had to ask but little of imagination, for our crucial problem has been a lack of conventional means to render our lives believable.

It is very much this lack of historical grounding or explanation that makes the first story in Houses of Ravicka so effective. In that section, Ravicka is an unstable city, held together by the efforts of the author of Regulating the Book of Regulations, who is desperate to prove that she is up to the role of Comptroller. Revealing the origin of the instability, and the extent of the life spans that have witnessed it develop, makes it intelligible—and correspondingly less effective. The moving houses are no longer simply the instability inherent in any system, requiring forms filled out in triplicate; they are moving closer towards knowable facts of nature. Rather than telling my four-year-old an elaborate story about how we pick which weather patterns will appear each day, I am about to launch into an explanation of how raindrops shape themselves based on the conditions in different parts of the atmosphere.  Both stories are interesting, but mixing the two detracts from both.

Houses of Ravicka, then, is an interesting but not entirely satisfactory book. I’m delighted to have read its opening chapter (first published as “No. 96” in Hambone 19, 2009), simply because it’s a good short story. Equally, I’m glad to have read about the city of Ravicka—its shifting houses, its people from various empires rubbing shoulders (and sometimes nurturing old grudges), and its rules and laws held together by the skill and devices of the Comptroller.  Even where the book fails, jamming together a genre in which the arbitrary rules of existence can be understood but not historically situated with another that layers history and explanation to build up a secondary world, it is an illuminating failure. And maybe the next time my daughter asks about moving houses or inexplicable meteorology, I’ll suggest we do a geoscrog with a plate-frag patometer.