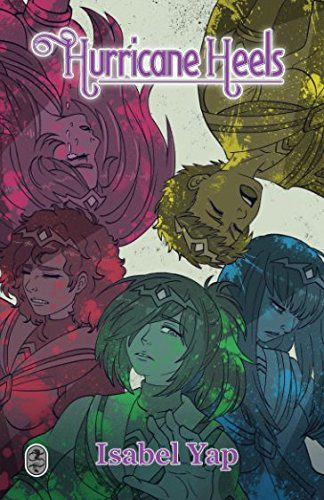 The first time I saw Sailor Moon, I was thirteen. I was sleeping over at my friend Janine’s house where a poster of Sailor Moon hung above her bed.

If you’re not familiar with the basic premise of Sailor Moon, let me give you a quick rundown. I (like many Americans) first saw it as an anime series in the nineties, though it was adapted from an earlier manga. The main character, Serena, is a clumsy middle school student who receives an amulet that allows her to transform into a superhero-like magical girl named Sailor Moon. Over the course of the series, she discovers other magical girls—other Sailors—who fight evil alongside her. The girls live ordinary lives, growing up, going to school—except for the times when they have to transform into their magical alter egos and save the world.

I never ended up seeing most of the show, just a few plot arcs, but the concept was alluring to me as an adolescent. I was tempted by the power fantasy, of course, but equally—perhaps even more so—by the intimate friendship the Sailors shared. Magic created and sustained their connection. Their bond wouldn’t dissolve in tears or arguments; it wouldn’t fade with distance or diverging paths. They could trust in their togetherness.

Isabel Yap’s moving short collection Hurricane Heels tells the story of five Magical Girls. They were in middle school when the goddess endowed them with the magical powers that initially bonded them as friends. Since then, they’ve graduated from high school. Some have gone to college. They’ve made careers. But they still have to contend with evil forces and protect the world with their magical weapons.

Now, one of the girls is getting married. Each story is told from the perspective of a different team member as the wedding approaches.

Sailor Moon is one of the most recognizable inspirations for Yap’s stories (especially to Americans growing up in the nineties), but it’s only one among many works in the Magical Girl subgenre of anime and manga. The subgenre seems rich and populous, but I’m not familiar with it outside of a few Western contributions like Steven Universe. On the minus side, that means someone better versed in the subgenre (or at least someone who’s seen all of Sailor Moon) would undoubtedly discover intricacies and references that escaped me. On the plus side, as a novice, I can vouch for how the story reads to someone largely unacquainted with the sources. And it reads awesome.

I did have a couple of quibbles with the format. I’m not sure whether it was the right decision to present this as a collection of five stories rather than a five-part novella. Technically, I suppose, either is viable, but the text reads more to me like a single piece than five separate ones. While the short stories might be able to stand alone, they’re also clearly meant as a set. There’s a synergy between them that’s important to establishing Yap’s premises. From a thematic standpoint, one could argue that reading them as separate stories could mimic the serial feel of the inspirations, but that didn’t feel like sufficient reason to me.

The collection also includes a prologue that summarizes the backstory in an awkward way. Like most prologues that deal with fantasy nouns and epic events, it’s dense and hard to follow. It doesn’t seem needed to explain things as the stories themselves contain perfectly natural and functional exposition. It’s possible the prologue was included because it’s a common structural component of Magical Girl serials, but it’s a bit disappointing that a work with so much emotional dimension starts off so drily.

The first story—“Hurricane Heels,” told from Alex’s perspective—begins when the girls gather for Selena’s bachelorette party. They intend a mundane, bawdy night of penis antennae and clubbing, but their plans are derailed when a greystone (one of their enemies) attacks. This simple plot skeleton is fleshed with Alex’s reflections, memories, and reactions to the other girls. In Alex’s surreal life, good and evil, obligation and magic, friendship and danger, are all tangled together. The prose is permeated with her ambivalence about how to proceed in the world.

All five of the girls are likewise wrestling with how to adapt to their shifting lives. Selena’s marriage represents a kind of change that the girls haven’t dealt with before. On the literal level, Selena is vowing to include a man permanently in her inner circle along with the Magical Girls. Her husband can’t become one of them; he doesn’t even know about them, and can’t. Their group dynamic can’t remain the same.

On the figurative level, marriage is a traditional ending to girlhood. When Selena gets married, she’s entering a stage in her life that’s conceptually closer to mother than maiden. Thus, Alex’s story sets up one of the most important thematic preoccupations of the piece as a whole: what does it mean to be a girl, as opposed to an adult?

The second story, “White Lie Sympathy,” is told from Ria’s perspective. Ria had once been the group’s outsider—she didn’t know any of the others before going to the camp where they were transformed into Magical Girls. She’s now integral, a professional event planner who keeps them motivated and organized. As the one who most often communicates with the goddess, Ria is also best able to express her doubts about the burdens they’ve shouldered, and try to discover what their sacrifices have accomplished.

“Fist with a Kiss,” from Aiko’s perspective, is a deviation in pattern, interlaced with pages from a script Aiko is writing about her life. Aiko’s deepest worry is the prospect of losing her friends if they continue to fight. A beautiful description of that fear: “Because we all loved Selena, and she loved us back, and that sort of love in itself was terrifying, when you realized how easily we could all lose each other. It had taken me ages to admit this to myself. It was always harder than it needed to be” (p. 79).

In the fourth story, “Only Fools Fall,” Natalie struggles to reconcile herself with the power she wields. An abuse survivor, Natalie dreads emulating her father’s example. When she was a child, as her father slammed her head against a cabinet, Natalie had once thought, “No one should have that much power—” As an adult, she worries over lists of the times she’s wanted to use her powers when she isn’t fighting evil.

Selena’s story, the fifth and last, “Kaleidoscope Heart,” finally takes us to the wedding day, replete with battle scenes, epic magic, costume power-ups, and satisfying conclusions to the character and plot arcs.

There’s a great deal that I haven’t mentioned here. I haven’t described Aiko’s trip to Japan, or the love affair between Natalie and Alex. There’s a rich density of events that explore the themes of friendship, power, obligation, adulthood, and loss—some rendered in detail, some rendered quickly, some in the past, some in the present.

The biggest strength of Hurricane Heels is the way it manages group characterization. As each character takes a turn at the point of view, the scenes where all five interact take on new depths. Rushes of quick dialogue and interactions become more meaningful as the reader learns to discern the subtext behind one girl’s annoyance, or the meaning of a hesitation by another.

Hurricane Heels also benefits from the juxtaposition of its writing style—which is lyrical, lovely, and what most people would think of as literary—with the popular media source material. The push-and-pull between the two creates unexpected interstices where the reader can be surprised, and where surreality can clarify and heighten emotion.

In summary, Hurricane Heels is excellent, and I hope that Yap’s well-wrought work receives its due.

Also, I’m going to buy a copy of it for my friend Janine who once had a Sailor Moon poster hanging over her bed.

Like Loading...
© Copyright 2017 By: Rachel Swirsky
About Rachel Swirsky
Rachel Swirsky is the editor of the anthology People of the Book, the decade's best Jewish fantasy and science fiction (Prime Books, 2010). In her primary career as a writer, she has published over sixty short stories in venues including Clarkesworld Magazine, Tor.com, and Subterranean Online. She prays daily not to feature in a Kafkaesque turn of events regarding bedbugs.
No comments yet. Be the first!