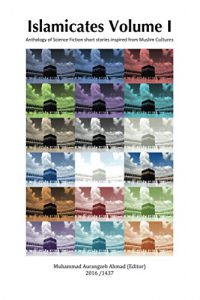 Aliyya was still waving the cursed device in his face. "You proved that we can take our fate into our own hands. You proved that life is the sum of our choices."

"Bah." He shooed the thing away. "Life is what Allah wills."

This conversation between a father and a daughter, both scientists but only one of whom also holds to religious faith, is found in "Insha'Allah," written by R. F. Dunham and collected in Islamicates, Volume 1, edited by Muhammad Ahmad. The themes of "Insha'Allah" are common in science fiction—whether the future is predictable (Asimov's notion of psychohistory comes to mind, if on a different timescale), whether human decisions can be anticipated (consider Minority Report [2002]), and whether there is any place for God in a deterministic universe. The "accursed device" that Khafid creates, using computing power to reduce divine mysteries to large calculations, echoes the device in Clarke's "The Nine Billion Names of God" (1953). The more interesting line in "Insha'Allah" isn't about the science, however, but the beliefs of the scientist, when the daughter demands of her father: "Did Allah will what happened to mother?"  Now we're in the realm of theodicy (also a rich vein for science fiction and fantasy stories, but also often a straw man). The number of stories interested in both the idea of a deterministic universe (and whether a machine can be devised to anticipate it) and also why God allows bad things to happen to good people is quite a bit smaller. "Insha'Allah" is a good story made memorable by the themes it places side by side.

The term "Islamicates" was coined by Islamic Studies scholar Marshall Hodgson to refer to the products of cultures dominated by Islam, whether or not these products were themselves actively religious. In his introduction to the present volume, Ahmad says that the purpose of his Islam in Science Fiction project was to "fill a gap in the literature about Muslims and Islamic cultures in Science Fiction," a mission which has "expanded to include spreading awareness, fostering and promoting Islamicate Science Fiction." This focus on filling gaps is important. It's tempting, especially with a themed anthology, to search for what is different. What is science fiction when Islam (or Islamic cultures) are grafted on? It could be a short step from this question to defining "mainstream" science fiction as not-Islamicate, and marking Islam as something other. The stories in this anthology paint a very different picture. Nearly all of them fit neatly into mainstream science fiction genres, but taken together they center on family, faith, ritual, and areas outside the English-speaking world, revealing the gaps in many anglophone venues.

In Alex Kreis's "Calligraphy," the opening story of the anthology, a master tilemaker confronts his limitations: "To my perpetual shame, I am the greatest of the tilemakers in the city of Isfahân." In the story, Master Naqash finds himself superseded by a genius who eventually leaves the city to pursue his craft. I couldn't help contrasting Salieri's "Mediocrities of the world, I absolve you" as he descended to madness, consumed by his own jealousy, or the stoneworker in Harlan Ellison's "Paingod" (1965), confronted by a masterwork and succumbing to despair as he realizes he will never again create something so magnificent. As is common in Islamicates, "Calligraphy" turns away from the familiar narrative. Master Naqash may be jealous, but he is not driven to despair or to seek the destruction of his rival:

I found that I was on my knees, and tears ran down my face. This was artistry beyond my skill. In the craftsmanship, clearly, but even in his holiness and his embrace of color and form. I had never created anything so perfect, and what was worse, I never would.

In "Calligraphy," the genius has created what we can recognize as another familiar mathematical and science-fictional construct—a Turing machine, in this case made up of ornamental tiles, and the master craftsman can only celebrate the accomplishment. With "Calligraphy," we again see the familiar themes associated with these science-fictional devices (in this case personal striving towards greatness), overturned by a focus on the main character's personal faith.

The stories of Islamicates slip easily into mainstream science fiction genres. "Operation Minaj," by Sami Ahmad Khan, is a straightforward story of time travel and military tactics that happens to take place on the Indian subcontinent, centered around a moment that may be unfamiliar to many western readers. The energy in "Searching for Azrail," a space opera by Nick "Nasr" Pierce, comes from the relationships that have developed between a young prince and the religious and military leaders around him. I tend to expect that science fiction will treat religious leaders as either faithless hypocrites or zealous fanatics, and dangerous schemers when involved in politics, but the Mufti of "Searching For Azrail" is faithful to his religion and his lord, influential but not at the center of a web. He is a character, rather than the caricature I have been trained to read.

Marianne Edwards's "Connected" opens with a world of scarcity:

[…] people talk wistfully about hard drives with hundreds of films and thousands of albums on them. I tapped the sensor in my palm and the image brightened again. If I didn't manage to save it somewhere in the next 24 hours, the last tangible proof that I'd had a family would be lost forever.

The world after collapse builds around the narrator as she rushes to her own precarious job manipulating memories and emotions. Counting the steps to work, our drug-addicted protagonist "tried to to make it into a dua—using the rhythm, praising Allah, thanking Allah, and then I realised I'd left my AnodyneTM at home." As the story progresses, the character's family and history are set against recognizable historical moments and predictions of near-future economic and technological developments in a chilling and angry story. If William Gibson is correct that the future is here, it's just unevenly distributed, "Connected" distributes that (dystopian) future more evenly, and specifically pulls the United States into a global context, brushing aside pretensions of exceptionalism.

Islamicates succeeds in its goal of filling gaps, or perhaps more precisely centering its readers on relationships and areas often passed over in science fiction. The stories reveal how many more tales there are to tell in the genre by embracing faith, rather than presenting science and religion as necessarily at odds, or by writing characters who define success in relation to a larger community. The action of "The Last Map Reader" by Sazida Desai begins with a set of cousins navigating the rituals of grief among a family gathering. The mystery that unspools from this moment requires knowledge passed down from one generation to the next to solve. While a bit plodding in places, "The End of the World" by Nora Salem tells a story of post-apocalyptic Spain, and of reclaiming hope and community. There are familiar elements in these stories, but also large and diverse worlds, and networks of relationships to families, faith, and broader communities.

The final two stories in the anthology represent opposite poles in some ways. I had feared that Islamicates would feature only the trappings of Islam: science fiction with dietary guidelines and prayers bolted on. Only with J. P. Heeley's "Pilgrim's Descent," which concludes the collection by following a group of pilgrims on the moon attempting a grueling passage as part of the Hajj, did I feel as though the science fiction could be easily separated from the religious motivations. The story communicates the exigencies of travel on the moon well: "Break open the pack and smear the binding gel. Watch it bubble, then fix, edges straining. Then patch." However well told, though, "Pilgrim's Descent" is a story where the science fictional and Islamic elements seem uneasy bedfellows.

In contrast, "Congruence" by Jehanzeb Dar may be the finest story in the anthology. Azal is a therapist in small-town Pennsylvania when a new client walks into her office claiming to be trapped in a time loop, endlessly reliving this day and the next. In part, this story is a well-realized character study of one woman and her interactions with her clients, community, and boyfriend. Elsewhere it is a surreal and compelling vision quest, reconnecting her with her spiritual heritage. At the conclusion, Azal reconciles these two realities, the cosmic and the mundane. Rereading the story, I've found the final paragraph at times inspiring and at times moralizing to the point of undercutting the impact of the story, but "Congruence" is compelling evidence that Islamicate science fiction has a sadly often overlooked role to play in today's fiction.

At the end of most of the stories in this collection, I found myself wishing for another editing pass. Most of them needed copy edits, or the pace tightening, or fuller characterization, and I wish they'd been polished just a little bit more. By the end of the collection, however, I found myself wishing the anglophone venues I am used to reading would feel as full as this anthology. There are stories here across the genres of science fiction: space opera, hard SF, time travel on grand and small scales. Running through them all are characters engaged with their communities, their families, and making sense of the world through both rigorous scientific observations and historically rooted faith. The stories that embraced those relationships and contradictions were some of the richest I have read. It is easy for me to find individual stories in Islamicates wanting, but, after finishing the collection, I want the marriage of faith and science, and the tensions and comforts that family and ritual provide, to appear more in the rest of the fiction I'm reading.