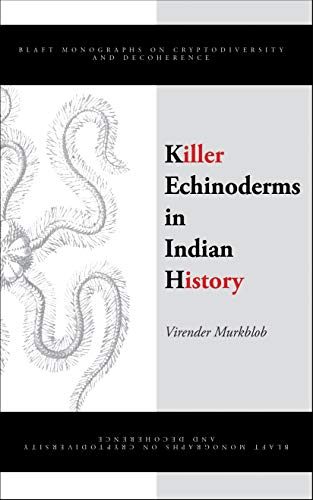 In a process known as evisceration, some holothurians (also known as sea cucumbers) expel their digestive tube and other viscera in response to danger such as predatory fish. Fortunately, these sea cucumbers can regenerate their guts.

Speaking of regeneration, some starfish reproduce asexually by “sacrificing” an arm; an entirely new starfish will grow from the limb.

Brittle stars can grow up to ten meters in diameter, while the tallest human in recorded history had a height of less than three meters.

Crinoids, which attach to hard surfaces with special appendages known as “holdfasts,” drill holes through metal and are responsible for dozens of major shipwrecks.

Only some of these echinoderm facts are correct. Others are exaggerations or complete inventions. How well can you separate fact from fiction? If the answer is “not well, Darcie,” you aren’t alone: I’m an oceanographer, but I’d still fail most echinoderm trivia contests.

The mysterious Echinodermata phylum encompasses thousands of known species that occupy every level of the world ocean. They’re common in sunny tide pools and the deep abyssal plains. Echinoderms range from colorful to transparent to bioluminescent. They can be squishy or rock hard. Some are less dangerous than a blob of gelatin. Others are terribly toxic. Sea cucumbers, sea stars, sea urchins, and many other sea things are members of this phylum. Yet despite the dazzling abundance and diversity of Echinodermata, its species, which live only in marine environments, are largely alien to human readers.

Murkblob’s Killer Echinoderms in Indian History deftly exploits both the enigmatic nature and remarkable biology of echinoderms to present a series of tall tales that blur the line between fantastic fiction and the real fantastic. At times, it’s difficult to determine whether a historical or biological nugget of information is linked to reality. Thus, readers are immersed in a sense of disquieting uncertainty.

The monograph contains four sections (“The Brittle Star Attack on Vijayanagara”; “Holothurian Thugs”; “Sukh Chand, the Urchin-Headed Raja”; “Weaponized Sea Lilies, Parasitic Annelids, and the Submarine Journey of Subhash Chandra Bose”) about echinoderms that shaped Indian—and at times global—history. As the section titles suggest, the invertebrate actors are highly diverse and include brittle stars, sea urchins, sea cucumbers, sea lilies, and parasitic myzostomida. The events, which span hundreds of years of Indian history, are relayed in the matter-of-fact voice of a typical academic treatise, although quotes from historical documents such as diaries and poems are interspersed throughout the monograph and deliver splashes of emotional poignancy.

The first section describes a series of violent attacks by brittle stars on seaside cities:

“Imagine, out of the blackness, a horde of glowing bluish-purple tentacles advancing, writhing across the Deccan Plateau, while flaming orange missiles rained down on them from the fort walls above!”

“The Brittle Star Attack on Vijayanagara 1511–14” is probably my favorite entry in Murkblob’s monograph. The attacks in this section are not random incidents of marine violence such as shark bites or jellyfish stings. They are coordinated, tactical acts of war by Ophiactidae against the human species. Over the course of three years, the giant brittle stars even make camps on land that are connected to the ocean by mucus pipelines.

Perhaps my favorite aspect of this section is its creative use of biology in storytelling. For example, it seems unlikely that a marine animal could launch a prolonged war on land-dwelling humans. However, Murkblob provides the following explanation for the brittle stars’ capabilities:

In either case, it appears that a symbiotic algae which grew on the bursae (cilia-lined sacs which open between the arm bases on the central disk) sparked a series of quick evolutionary modifications of the hemal system, allowing the creatures to venture many miles onto the land, and to expose themselves to dry environments for hours at a time before needing to rehydrate.

Indeed, symbiotic algae are widespread in the ocean and confer great advantages to hosts. For example, the survival of coral reefs is dependent on symbiotic algae, and coral bleaching is the result of algal death. Furthermore, the hemal system transports oxygen through brittle stars. Now, could symbiotic algae rapidly modify the hemal system of brittle stars? I have no comment. Nature is surprising. Branches on the tree of life have shifted between the sea and land over time. Plus, as Murkblob notes, the giant brittle stars might have been telepathic; even as an oceanographer, I am not qualified to speculate on the impacts of telepathic abilities on evolution.

As I mentioned previously, academic writing has a distinctive “objective” tone (although writing styles do vary among fields and individual papers). As a geoscientist, I’ve read hundreds of scientific papers. Subjects such as species extinctions, fatal tsunamis, village-destroying landslides, and the health impacts of heavy metal contamination in potable water are relayed in the same manner as papers about the evolution of moss. This “objectivity” can be exploited to chilling effect in fiction that is written in the style of, for example, a monograph. “The Brittle Star Attack on Vijayanagara” describes horrific things. People are ripped apart and devoured, and buildings of the Malabar Coast are destroyed by thrashing, disembodied echinoderm arms:

Brittle stars, even more so than other echinoderms, have a special talent for regeneration … The giant sea creatures attacking the Malabar Coast weaponized this adaptation. They would detach massive, muscular, serpentine appendages three meters long and twenty centimeters thick, then send them scuttling on hundreds of tube feet through doorways and windows to strangulate the hapless humans defending the structure under siege.

The juxtaposition between Murkblob’s academic style and the visceral nope factor of killer echinoderms that can detach their own wriggling limbs in order to strangle victims is delightfully shocking.

The middle two sections of the monograph are more intimate in scale than the bookends. “Holothurian Thugs c.1600–1840” describes a strange link between squishy (and dare I say cute?) pink sea cucumbers and crime. “Sukh Chand, the Urchin-Headed Raja, 1811–21” is about the life of a man who succumbed to a slow-growing parasite.

Notably, the monograph concludes as it began: with warfare. “Weaponized Sea Lilies, Parasitic Annelids, and the Submarine Journey of Subhash Chandra Bose, 1943” relates a battle at sea between WWII scientists and their weaponized echinoderms. Although zero humans are directly involved in the physical conflict, the battle results in a sea that churns with death and mayhem the likes of which I have never read before. No spoilers, but I will note that readers who enjoy Sharknado will get a kick out of this entry.

“Weaponized Sea Lilies” complements “The Brittle Star Attack.” Sure, both deal with a similar subject, i.e., war, but the differences between each section are what make them fine bookends to the monograph. The brittle stars have agency; they are a large, violent, intelligent enemy to humankind. In contrast, the echinoderms in “Weaponized Sea Lilies” are tools developed by humans (specifically, American, Ethiopian-Italian, and Japanese scientists) to kill other humans. Perhaps this is what makes “Weaponized Sea Lilies” the most believable entry of the four. As Murkblob notes, “war has always proved the most fertile breeding ground for new technologies …”

The invertebrates are weaponized through all-too-familiar methods for the development of biological weapons. Zehra Bianchi, a scientist working for the US Navy, tweaks a natural feature of sea lilies—their holdfasts—to breed a sea lily variety that can drill through submarine hulls. In response, Akiko Serizawa, a scientist working for an Imperial Japanese military unit, fills torpedoes with natural echinoderm parasites in order to neutralize the sea lily threat. The section ends with questions: are weaponized echinoderms still being developed? Will their next incarnation be deadlier and more effective than their first? What killer echinoderms will shape the future of India and the world?

Overall, Killer Echinoderms in Indian History was a fun read. The author has a clear appreciation for the wonders of Echinodermata and adds refreshing variety to the current body of cryptid literature. The ocean may be the closest thing to an alien planet on Earth, but the land and ocean are inextricably linked. In many ways, we are impacted by the lives of echinoderms, and they are impacted by us. This truth takes center stage in Murkblob’s exciting monograph.

Like Loading...
© Copyright 2019 By: Darcie Little Badger
About Darcie Little Badger
Darcie Little Badger is a Lipan Apache scientist and writer. After studying gene expression in toxin-producing phytoplankton, she received a PhD from Texas A&M University. Her short fiction has appeared in several publications, including Fantasy Magazine, Mythic Delirium, and Love Beyond Body, Space, and Time. She also contributed to Moonshot: The Indigenous Comics Collection Volume 2. Darcie tweets as @ShiningComic. For her complete bibliography, visit darcielittlebadger.wordpress.com/my-short-stories.
No comments yet. Be the first!