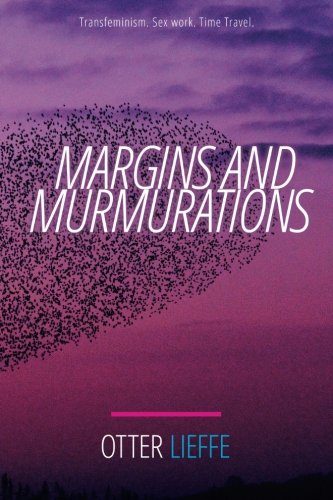 Reviewing self-published books is less and less of a gamble. When reading trans literatures, reading self-published books is a necessity. Even now that traditional publishing is increasingly open to trans themes, there are entire swathes of trans experiences that surface mostly only in self-published and small-press works. Margins and Murmurations by Otter Lieffe is a strong illustration of this phenomenon, in multiple respects: from the friendly portrayals of sex workers to non-cis-passing trans women being hounded even by supposed feminists, it brings topics into speculative fiction that are still far from the mainstream.

Margins and Murmurations is a near-future dystopian novel with a large cast, but still focusing on one central character—Ash, an elderly, white, Western European trans woman, who has the ability to travel through time. The story is set in an unspecified city on the Western coast of Europe, north of Spain—we know this, because immigration from Spain is discussed several times in the book. (The author, a trans woman herself, is from the UK.)

As the City descends into military dictatorship, members of various minorities—known as "divergents"—either escape beyond the borders of the city-state into the surrounding forests, or remain and build an underground resistance. This means we see a lot of coalition-building between disparate minorities, who also often vehemently disagree with each other.

Margins and Murmurations very much wears its politics on its sleeve, and in that sense it's similar to another book I recently reviewed on my own website, A Country of Ghosts by Margaret Killjoy (also a transfeminine author). Many trans people are activists by necessity, so activism is often part of our lives and it is good to see that in fiction—and speculative fiction—too. This might mean the narrative comes across as "preachy," but our lives can be preachy too. Again, the important point is to have a broad variety of experiences represented across many books, and that includes works where trans characters—or even cis ones—are getting very explicitly ideological. I personally enjoyed reading about this, but I know people's mileage greatly varies.

This book shows activism as a process—and as a process that often goes awry, or gets bogged down in details, or is simply slow, because everyone needs to be considered as a human being and this is an absolute necessity. There were scenes in Margins and Murmurations that I have seen play out practically verbatim in my own circles. Getting a discussion terribly derailed by TERFs (trans-exclusive radical feminists) or seeing vegans and disabled people yell at each other about the food at meetings: all this is very real and often not really represented in larger-press trans books. The protagonist's annoyance, frustration, and hurt connected to organizing is likewise very real.

I also appreciated the cast. Ash has a strong, longstanding friendship with Pinar, a cis bisexual woman of color and fellow hermit in the forest. Ash is also explicitly aromantic and their friendship is not portrayed as lesser just because it's not romantic. ("We have a lifetime together. But we're not romantically attached if that's what you mean. Ash doesn't do that in general." (p. 90)) It was wonderful to see two community elders both fight together and have quiet, relaxing times together.

Another point-of-view character, Danny, is a cis queer man, a pole dancer and sex worker. He is juxtaposed with the General, who has a similar background, but who has gone on a very different life path, working for the oppressive government of the city as a high-ranking military officer. He is the classic neo-Nazi/white supremacist gay man, and the novel explicitly discusses those aspects of his character. This is one of those sensitive topics and criticisms that I feel absolutely must emerge from within a community. Because, yes, these people exist—I come from a country where many of them exist—but in the hands of a writer with an outsider viewpoint, this topic can easily be turned against all queer people. Here, the presence of many queer characters ensures that queerness is not identified with this one Nazi—or his comrades, because we do find out that the regime has many other queer supporters too. We also get to see the unaffiliated, uncommitted everyday citizen: Nathalie, a kinky white woman who develops a crush on Kit, a woman of color who works as a pro-domme and resistance organizer. Nathalie's choices are very telling, and also rather painful to follow in their predictability.

One of the main topics the characters struggle with throughout Margins and Murmurations is trauma. It is revealed very early on that Ash can travel through time—and the way this plays out can be considered a literalization of trauma flashbacks, though not everyone in the book is on board with this interpretation! There are parallels here with Octavia E. Butler's classic Kindred (1979), in which the Black woman protagonist, Dana, goes back to the time of antebellum American slavery, but there doesn't seem to be an aspect of direct referencing. Ash does not vanish (unlike Dana): she travels out of body, though she becomes at least somewhat corporeal at her destinations. She doesn't control her flashbacks, and she has several disagreements with Pinar, who tries very much to look at time travel from the perspective of biological traits and tries to see how it can be “adaptive.” Some of these arguments can be used to apply to transness as well, as Ash points out, but they do not really have explanatory power. Here I was reminded of Sami Schalk's academic work Bodyminds Revisited (2018) about Black women's science fiction, in which Schalk conceptualizes Dana's time travel from Kindred as a kind of fictional disability in addition to her literal, conventional disability. In Margins and Murmurations, we see similarly unpredictable time travel likewise affecting a character's choices of action.

The trauma focus and dystopian setting of the novel mean that terrifying events transpire. In addition to murder, there is an attempted rape written from the General's point of view which readers might find especially upsetting: activists physically fight a dictatorship and wage guerrilla warfare; prison life and wardens' violence against inmates is shown. At the same time, it’s not all relentless brutality: sex workers are held in very low esteem by the general population, but the novel has several intimate, everyday portrayals of sex workers' ordinary lives, too, strongly written from an interior point of view. This is one of the strongest aspects of the book.

Some of the the novel’s most hurtful elements are also written with insider awareness: even among activists and supposed comrades, there is betrayal, anti-trans sentiment, and the type of attack that is popularly called "punching down"—targeting a more marginalized group. Ash is not cis-passing, and she experiences a lot of hostility in relation to that. I found this very relatable. That process where a "feminist space" rapidly becomes a "women-only space" rapidly becomes a "not YOU!" space? It's right there in the book.

Margins and Murmurations has many strengths. It is overall both an important and enjoyable work, which underscores the fact that self-publishing can no longer be dismissed, as sadly still happens—and which is in itself a mechanism of marginalizing trans literatures. But it does have weaknesses, and rather typical first-novel weaknesses at that. The pacing is somewhat uneven, which really becomes striking in the last fifth of the book. Many events related to the final confrontation are not shown, only retold by a single character. This could easily have been fixed by giving this character one or two more point-of-view chapters, which could have proven really action-packed and dynamic. The book had an editor, credited twice inside my copy (it also apparently had a marketing budget, since I got a print review copy!), but I sometimes wished for slightly more assertive editing, especially near the end. Without spoiling the details, I found the ending quite abrupt—though I do not bemoan the cliffhanger, as the second book in the series, Conserve and Control, has just been released.

I also had small qualms related to the diversity aspects—signing is an important aspect of the novel, and the author tries hard to dispel misconceptions. But most of the characters, and all of the point-of-view characters, are hearing, which felt like a missed opportunity to me. It would also have been good to see at least one (even if minor) intersex character, because I think all other letters of the QUILTBAG+ were explicitly covered.

I am looking forward to reading the next volume despite these imperfections. Margins and Murmurations held my attention from start to finish, and made me curious about Conserve and Control. I also felt that it showed many aspects of trans lives that are often rapidly backgrounded, but here were very deliberately and thoughtfully centered. I will be keeping an eye on the author and the series.

Like Loading...
© Copyright 2018 By: Bogi Takács
About Bogi Takács
Bogi Takács is a Hungarian Jewish agender trans person and a resident alien in the US. E writes both fiction and poetry, and eir work has been published in a variety of venues like Strange Horizons, Clarkesworld, and Apex, among others. E reviews diverse fiction, poetry, and nonfiction at Bogi Reads the World. You can follow em on Twitter at @bogiperson. Bogi also has a webserial, Iwunen Interstellar Investigations.
No comments yet. Be the first!