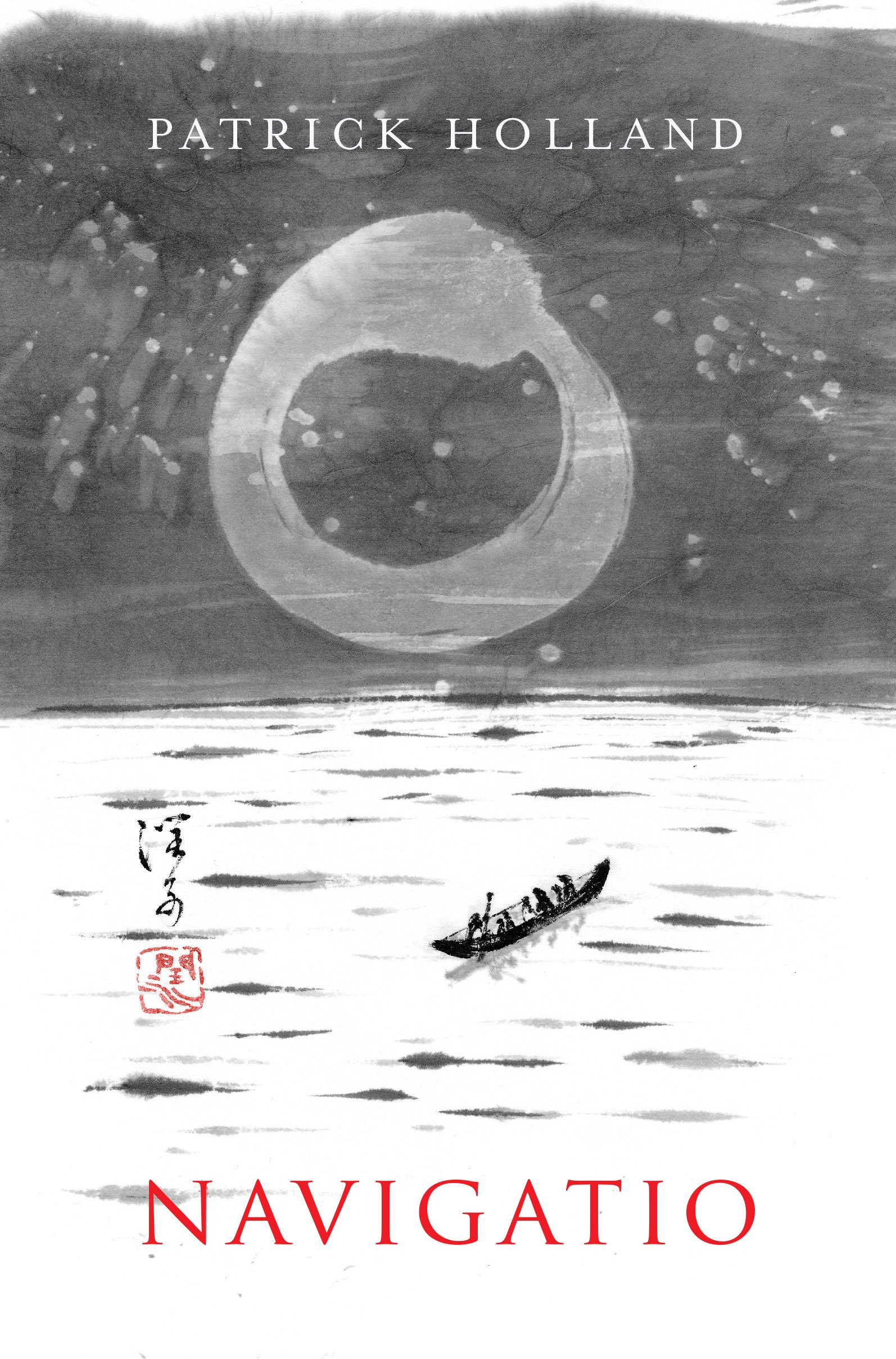 In the sixth century the Irish Saint Brendan, according to legend, set out in a sailboat on what would end up as a seven-year search for Paradise. This Voyage of Saint Brendan, commemorated in a number of manuscripts from the Middle Ages, is a fantastical travelogue re-imagined by Australian author Patrick Holland in his recent book, Navigatio, beautifully illustrated by Junko Azukawa.

Navigatio includes the usual fantastic creatures—mermaids and dragons and witches, etc.—but they are temporary things, stepping stones within the text. That text is a fluid one, both in terms of voyage and structure. Holland doesn’t stick to Irish legend: Brendan’s curragh drifts into future worlds as well as fantastic ones; different waters and hemispheres, Ireland to Vietnam. There are skyscrapers in the search for Paradise, boats made of iron as well as ox-hides.

It is a fluidity with an underlying structure. Brendan starts the voyage in several different ways, one after the other, as if they’re all equally valid. The islands he visits on his search tumble over each other and backwards, and the text is organised into many intercut stories, interrupted by illustrations and the occasional page of poetry or wordplay. (This results in a very aesthetic read, although one has to be in the right mood to enjoy it best, I think, and that mood may well be contemplative.) The main interest of the book, however, rests in that underlying structure, which is very well executed if not entirely original.

That fragmented structure, the way it rewrites and re-imagines, put me very much in mind of Invisible Cities by Italo Calvino. Holland doesn’t have the same lightness of touch, I think—his writing has in it more stony tones than whimsy, and very little humour—but the multifaceted take on reality is strongly similar. Brendan’s journey, cut into interleaved chapter-themes of "Hell," "Light," and so on, mimics almost exactly Calvino’s interwoven "Cities and the dead," "Cities and the sky" . . .  organisation.

Brendan owes a lot to Calvino’s Marco Polo. In Cities, Polo describes to Kublai Khan all the places he has been, although the cities are fantastic and become ever more so, to the point where Polo doesn’t even travel any more. He just stays with the Khan and keeps describing these exotic locations, and the Khan comes to understand that these invisible cities, these places of empire are a single city: Venice, the home and origin of his guest, which Marco Polo has all the time been describing ("Every time I describe a city I am saying something about Venice" [trans. William Weaver, Harcourt, Inc., 1974, p. 86]). Note, for comparison:

All Islands are one. There is only one Man abroad the wild seas, only one shore he lands upon and leaves, only one home he seeks and never reaches . . .&nbspno matter how far you sail you cannot leave. (157)

In Navigatio, it’s the islands and the dream-state nature of the encounters that get the bulk of the characterisation. Brendan himself is fairly thinly drawn. Granted, it’s a short book, but the human-shaped Brendan is essentially a placeholder, as much a vessel as his curragh. As all cities are Venice, all islands are Brendan: those with monsters, those with barren rock, those associated with uncertainty and wonder and abandonment. This gives insight into his spiritual mindset, but less so into his underlying personality, which might be most accurately described as dampening. (One imagines he could make for either a comfortable or a very uncomfortable travelling companion.)

One point at which his personality really stood out for me was a section dealing with the crew’s encounter with a dragon. At first sight they turn and row away as fast as they can: well, fair enough. It’s the sensible option. I would have done the same. But when asked, Brendan opines that it was right for him to run away. Doing otherwise would have been self-aggrandisement. "I ran away from vainglory," (31) he says, and that’s the point where I rolled my eyes and thought Of course you did, you smug bastard.

One of the crew members agrees with me. Padraigh is sceptical. "That is easy to say," (34) he smirks, and Brendan apologises for the seeming temerity of his original claim. But Holland promptly turns this seeming abashment on its head: the dragon gives chase, and Brendan banishes it—as he clearly could have done in the first place. "Padraigh lowered his eyes when Brendan looked his way" (35).

To me, this passage was the first of very few times that I felt an emotional connection with any of the characters. It raises, by necessity, a couple of questions. First is Brendan himself. Can one actually like the man? He might be running from vainglory but he’s not exactly humble. Again, fair enough. I like a lot of people—a lot of characters—who aren’t humble. No. I can’t say I do like him. Perhaps this is the function of a saint: to define humanity by its mimicry, to take on the face and form of a person, sanctity stretched over skeleton. Still. I don’t like him, and I don’t trust him. This may be a result of reader bias—as an atheist, I am strongly predisposed to scepticism—but it’s hard to connect with someone I feel no emotional connection to, someone who seems to be written so metaphorically.

This is where the second question comes in: am I the only one who thinks so? Padraigh is a version of Patrick, and it’s tempting to wonder just how much author self-insertion plays a part here. One can never truly know, bar an admission from the author. That being said, Padraigh is the one member of the crew—so briefly defined as individuals, so collectively amorphous—besides Brendan who seems to have a distinct philosophical viewpoint. Padraigh, "whose heart was unknown and who troubled Brendan" (9), Padraigh who "did not believe in the devil" (15).

Holland is a religious man—a convert to the Greek Orthodox Church—and one presumes that his conversion came with questions and doubts and difficulties of its own. If the various islands that Brendan sails to are in part reflections of himself, then it’s not a stretch to wonder if Padraigh is also one of Brendan’s many parts. (Or if Brendan is one of Padraigh’s . . . )

In the "Hell" chapter-thread, Padraigh calls the devil to the boat. He laughs while he does so—his disbelief allows him the luxury of mockery. Yet when all other members of the crew fall asleep, Satan does indeed come to Brendan, the sole remaining sailor awake on the boat. The conversations between Satan and Brendan—the temptations, the truths—are the meat of the "Hell" chapters. Crucially, these conversations are always solitary. None of the men witness them—including Padraigh. When—and only when—Padraigh’s scepticism is removed from the "Hell" text, Satan takes his place. To what extent they are the same is a many-layered question.

He’s a tricky character, Satan—but although he’s undoubtedly a threat to Brendan’s ideals he never strikes me as particularly menacing. Pretty much the worst thing he does is tell Brendan the truth, when he catches him looking at the stars.

"Indeed, you know the sun does not rise and fall around you out of devotion, what you do not know is that it is bigger than a hundred worlds, and it is smaller than the biggest suns by a thousand times, and there are more of those in the universe than there are drops of water in this ocean. So many more there is no number that will fit it. And their light shines on infinite desolation. What then of your significance under these cold and hateful skies, brother? Believe this, we are alone!" (40-41)

Brendan isn’t particularly blinded by science—he claims "the heart of a poet" (41) as reason enough to dismiss this truthful argument. It’s even more ambiguous when the biggest untruth in the text comes from Brendan himself—on one particular island, he consoles an old man and his daughter with the lie that there is nothing good upon the ocean, that they are better off where they are. He means it as a kindness, but it isn’t hard to see that he feels his own dreams, his own desires, are both unsuitable for and unattainable by others. (Can one be a saint without condescension? Without the perception of condescension? Navigatio is the story of a saint, but it’s hard to read and not wonder if it is also a comment on sanctity and the nature thereof—what does it mean to be a holy man, and how can other people actively engage with such?) Satan’s truths are not Brendan’s—there is a separation between them. It’s non-overlapping magisteria all the way, essentially, but Brendan’s refusal to meaningfully engage in the truth that Satan speaks is a clever way of underlining the novel’s structure and tone, which are poetic to the core, privileging dream and metaphor and fragment in a non-linear manuscript. This is not a place for telescopes and the Hertzsprung-Russell diagram.

Indeed, there are so many beginnings and endings that it can be difficult for the reader to parse out an actual storyline. The text thus reflects the voyage. Brendan’s curragh has sails and oars, but against the might of wind and waves these can prove ineffective, as when the mast breaks during a storm. Much of the voyage is therefore a deliberate giving up of control: the sails are taken down and the oars are put away and the curragh is left to float on currents, an object of fate. This leads to a journey full of dead ends and dead islands, a strange and irregular voyage to Paradise. One can only presume that this is itself a reflection of the religious journey. (Not having experienced such a thing, I can’t say for certain this is so—although science itself can be a dead-end experience, where hypotheses and new experiments disprove old facts.) As such, I can understand over-valuing the linear experience—as does Brendan, I suppose, and Holland himself.

Or perhaps we are not where I thought, but at one of the points that makes up one of the three strokes, or a speck in the map’s blankness. And the lines mean a place larger than the Earth and the known worlds. I have spent thousands of hours poring over this map, trying to find my place. Sadly, I am successful each and every night. This map is perfectly accurate and true. And, like you say, perfectly deceitful. For like the universe it accommodates all theories, and I have no notion of its scale. (131)

Octavia Cade has had stories published in Strange Horizons, Aurealis, and Cosmos, amongst others. Her novella “Trading Rosemary” was published last year by Masque Books. She is particularly interested in Antipodean speculative fiction. You can find her at ojcade.com or on Twitter @OJCade.

Like Loading...
© Copyright 2015 Octavia Cade
About Octavia Cade
Octavia Cade is a New Zealand writer. Her stories have appeared in Clarkesworld, Asimov’s, and Strange Horizons, amongst others. Her most recent novella, The Convergence of Fairy Tales, was published by The Book Smugglers.
No comments yet. Be the first!