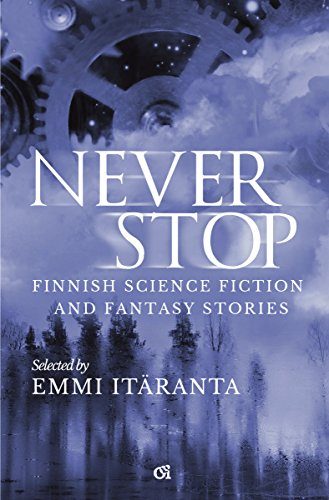 Never Stop is a collection translated from the Finnish—sometimes by the author of the story, but more often by another person. I was very keen to read its stories, as I had hoped for something redolent of Sibelius, or with the air of the famously unfamiliar language the stories were originally written in. However, on the whole, these pieces tend to tap the same stream that quenches most modern Anglo-American fantastika. I was left disappointed, then—but perhaps this is unfair, since there are excellent and unusual stories to be found here.

Perhaps it was simply the flat affect of the first story (“Never Stop” by M. A. Tyrskyluoto), set in a rather familiar fictional place and with little sense of character. Here, the ending arrived where a story might really start. But, in truth, unshaped or rushed endings were present in other stories too: “Josefiina's Cart of Wonders” by Maija Haavisto, for example,  had a well-defined setting and was effective as a tall tale but had little more to say, telescoping into a vague moral. The world of Saara Henriksson’s “The Whaler's Wife” was well drawn, too,  and the story also builds a sense of feeling, this time of bleakness rather than childhood innocence, and so its own rather blank ending feels a little more fitting.

Those two stories share more than their bathos. They also cover the two main "themes of place" I saw in the collection—the sea and the village; the infinite, nature and the unknown or the intimately known, the human, the constrained. For example, “A Winter Night's Tale” by Katri Alatalo is a medieval-style fantasy, with a storyteller travelling through winter from village to village. The stories she tells at each destination are powerful, even spellbinding, for her listeners and have the additional impact of describing the world to the reader. The most powerful story she has, though, is one she does not want to tell—her own. Angered by a village that rejects her, she talks about her half-blood life, her outsider status, and finds one responsive child.  Perhaps there is a message here that families are, at least in part, a matter of choice. In J. S. Meresmaa's “The Heart That Beats in a Dream,” our protagonist has left her family for the town. Being a bobbin-winder girl in a factory town gives her new freedoms, but still constrains her within the social web. There is also, though, a far stranger web, which opens a gateway between worlds and enables her ultimate escape. The technology of this web is woven into the story quite neatly, contrasting with both cloth and the spider’s web. “The Silver Bride” by Markus Harju has all the hallmarks of a classic fairy tale—the rich man who seeks a bride, to be made for him by the blacksmith, and a misshapen, seemingly unloved, blacksmith's boy. The story carries the fairy tale voice precisely, so the undertone of the characters having created a slave, a robot, is held carefully present but in check until the climax.

Harju’s story is immediately followed by my other highlight of the book—“The Wings of the Hornet Queen” by Artemis Kelosaari—which successfully combines body horror with a Hornblower-esque milieu. The fetishisation of corsetry is taken to extremes when a French naval captain reduces his own internal organs to more closely fit the idealised shape of the perfect officer. A British captain works with him, past their national rivalries, to see how much further they can take the idea. The British captain is condemned for experimenting on children, and given by the authorities the choice of certain death through execution, or likely death by becoming her own test subject. The parts of the story from her viewpoint communicate her belief in her own righteousness, whilst a contrasting narrator provides us with the fear, disgust and, ultimately, adoration of her own officers. The combination delivers strong characters with clear motivation, and the imagery is clear and the outcome fitting, in a powerfully perverse way.

Jussi Katajala's “Mare Nostrum,” meanwhile, is set in our own time, with an opening scene likely to be familiar to most visitors to Helsinki. The setting soon moves to the USA as the story focusses on a global terrorist organisation that threatens all those who misuse the sea. The currency of oceanic garbage as a topic gives the tale a  fillip, and there is a delight in having an octopus protagonist, which quickly overwhelms the mystery of who the terror group might be. Maintaining the maritime theme, “Star in the Deep” by Anu Korpinen is a somewhat slight piece, told from the perspective of a mermaid; it is, nevertheless, evocative of a larger setting that the story leaves unexplained, at the same time wrapping up its plot rather tidily. Magadelena Hai's “The Beautiful Boy” takes us away from the cold oceans to a fantasia of warm Polynesia, though the wide ocean is one of deadly acid. The society depicted is brave and cruel, something the author can show whilst also evoking the narrator's naivety. It is clear to the reader that the narrator will be sacrificed long before he recognises his fate.

I could, through over-interpretation, fit some more stories into the two themes of sea and village, but not all. “The Guardian of Kobayashi” by Mikko Rauhala, for instance, is a treasure quest in space. It evokes a believable future history through glancing comments and develops a lovely twist ending. Quite satisfying. By contrast, “The Air Itself Caught Fire” by Janos Honkonen is quite unsettling, sliding dragons into the dark history of Nazism and the development of nuclear warfare. Are the dragons concealed in fire, or a representation of trauma? It is the very equipoise of the story’s answer to this questions that makes it work.

Also unsettling, through a more straightforward horror effect, is “My Buttercup, My Everything” by Maria Carole. This is not the kind of story that needs to explain how a man can be butchered and yet his hand retain his sentience. Instead, it is the story of how that hand becomes a sex toy which in turn becomes jealous when the hand's new owner takes a boyfriend. The drive of the story enables all the impossibles to be waved away in favour of the focus on obsession and “ownership.” I'm afraid, though, that I simply didn't connect with, “The Tiniest in the World” by Anni Nupponen, which is a first person tale of growing from being “a member of the Lilliput tribe” to, literally, becoming a galaxy. There is something there about a search for enlightenment, but none of the seemingly deeply felt events in the story are expressed as more than bare facts.

“Maid of Tuonela” by Anne Leinonen, though, is the kind of story I was hoping for more of in this volume. It must read very differently for those rooted in Finnish Mythology rather than the Greco-Roman base of much of the rest of Europe; but, given my roots, this felt like a slightly gender-swapped take on the ferryman over the Styx, combined with a weird and fascinating take on the story of Orpheus and the Underworld. And yet, from the native perspective of the writer, the maid is the proper owner of the ferry into the underworld, and the living man who visits the afterlife is most likely a shaman on a quest. How much of the rest is original I could not guess—but it is this kind of bewilderment, this introduction to a world previously unknown to me, which I think gives the most value to translation. It feels like much more of a discovery than simply learning that writers across the world can follow in the footsteps of Bruce Sterling, or compete with Seanan McGuire.

It’s worth pausing to compare this collection with another recent anthology of Finnish fantastika, Self-Inflicted Relative. As the subtitle states, it is a collection of thirty-three stories, each of one hundred words. Reading it was, for me, like eating a packet of mixed nuts: some of its contents weren't really to my taste but were gone so quickly that it was easier to take a sip of water and move on. Others were glorious, tales I wanted to savour—indeed, I read “Fairy Forest” by Mixu Lauronen out loud to guests. This took only a minute and the punch line worked just as well for non-genre readers; but that is not to say that every story with a clear punchline in the collection worked equally well. Sometimes a hundred words isn't enough to be subtle. Others are able to use implied context to do some of the work. For instance, Christine Thorel’s “Relatives and Grapes With seeds, Both Look Good but Who on Earth Wants Them?” uses the style of a health article to set up the idea of a “self-inflicted relative,” very quickly creating a lingering recollection. This example was only of the genre on the level of perspective, but other authors in the collection use the common tropes and furniture of fantastika, whether unicorns or science experiments, whilst “Entomophobia,” also by Mixu Lauronen, manages first-class body horror.

Self-Inflicted Relative exceeded my expectations, then, not in terms of strangeness but in the tinier pleasures which can emerge from the drabble-writing challenge of making a story of exactly a hundred words. Never Stop, despite its lengthier stories promising perhaps more of the—to me unknown—world of Finlandia, was rather less delightful. I am, though, placing too much weight on a couple of collections, of a small number of stories—if I were reading a collection from Australia, for example, I doubt I would I expect more than this volume holds. There are some good stories in Never Stop and a great deal of pleasure to be had from Self-Inflicted Relative, which I would recommend to any reader of fantastika. However, the latter's distinctiveness lies in working within the word length. Without the creativity required within that constraint, Never Stop doesn’t quite develop a distinctive character of its own.

Like Loading...
© Copyright 2018 By: Duncan Lawie
About Duncan Lawie
Duncan Lawie has been reviewing SF for half as long as he has been reading it, although there was a quiet period during two years as an Arthur C. Clarke Award judge. His reviews also appear in the British Science Fiction Association's Vector Magazine.
No comments yet. Be the first!