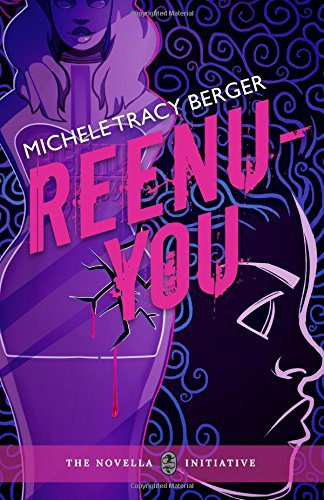 Reenu-You, Michele Tracy Berger's novella from Book Smugglers Publishing's Novella Initiative, outlines the space of its storytelling early. “The politicians, bureaucrats, and scientists shouldn't be the only ones who get to have their say about the virus and what it did,” says Kat, the primary perspective character, describing both her aim and the novella's overall focus (Ch. 1). Of the many perspectives that appear in the following chapters, memos, transcripts, and news stories, few are politicians, bureaucrats, or scientists. With a few exceptions, those typical authorities are not given the opportunity to speak for themselves. Instead, Berger gives us voices of the community directly affected by her fictional epidemic, primarily African American and Latina women.

This focus reminded me of A Paradise Built in Hell, Rebecca Solnit's 2009 book about disasters and their aftermaths. Solnit draws a line between the mythos about disasters believed and repeated by those with authority—often politicians and bureaucrats, and even scientists—and the direct experience of those who live through a disaster. The “official” mythos states that disasters destroy the social fabric, turning people against each other in a panic. This official story is used as an excuse by those in authority to hoard information and resources, causing more violence on top of what has already been wreaked by the earthquake or hurricane or flooding. The disaster mythos tells a story of separation and division, whereas those in the middle of the disaster often experience deep connection and even, unexpectedly and counterintuitively, an experience of joy, “an emotion graver than happiness but deeply positive” (Solnit, p. 5). The disasters that Solnit uses as case studies are all more immediate than the slow, anxious spread of an epidemic, like that of the virus in Reenu-You, but the commonality remains. It feels strange to say so, but there is joy in this novella. A grave and important joy rooted in connection and community.

There are many details that point away from joy. Death is a constant background presence from the opening pages, in which Kat describes the ways she once thought she would die: “severing delicate tendons,” “breaking my lower back,” “a massive heart attack.” Later, there is real death, and moments of real body horror, not just the imagined kind. Another character, Constancia, begins losing her hair because of the virus, the loss described like an alien creature: “the little globby bits of hair follicles were swollen white masses at the end of the hairs” (Ch. 3). This is the language of horror, of alienation from one's own body, not the language of joy.

The novella never leaves horror and alienation entirely behind. Kat and the other women infected by the virus travel through a series of waiting rooms, where they sit in silence punctuated by moments of outrage and confusion. They try to share information with the doctors and staff, but are talked over, their perspectives ignored. In a key moment, the women in the waiting room determine that they all have used the same hair relaxer, marketed as “Reenu-You,” but their triumphant discovery is under-played by the doctors. “I realized they had no real idea what a hair relaxer really was or what it did,” says Kat. “I felt myself becoming invisible to them. We were all becoming invisible to them” (Ch. 5). Instead of connection, the women in the waiting room are isolated, kept away from the conclusions and theories being shared about their bodies.

The isolation of the waiting rooms is a counterpoint to the connection that five of the women find when they gather on their own terms. They stay up late talking, delving into their commonalities and their differences, all the little pieces that make up who they are. Kat marvels: “These women were actually curious about other people. About me” (Ch. 7). Here, with these women, she is not invisible, as she was in the waiting room and as she has been, she realizes, in so much of her life. The source of the joy in the novella is in the gathering of these five women, their similarities and differences weaving together into a new way of being: “it felt like we had escaped to a new emotional territory, a comfort zone in the city” (Ch. 9).

The joy the women find together is not simple, especially as it seems to be caused by the virus itself. The official perspective would characterize their connection as a part of their illness. This perspective is exemplified by a “Classified CIA Memo” that appears as an interlude between two chapters. The memo reduces the growing connections between the women to “undesirable and unintentional side effects” and mentions that “test subjects” with these side effects were “terminated.” The women, too, have mixed feelings about the virus and their growing connections. Kat observes, at one point: “It was the same sensation I had been feeling with these women all along over the past few days: part compulsion to be next to each other as dictated by the goddamn Reenu-You virus, but part because I wanted to” (Ch. 14). Like the CIA, she sees the virus imposing changes, and resists that imposition. Unlike the CIA, however, she can also see her own choices and interests intermingled with the virus. This is joy found in the midst of horror, not joy that drives horror away.

Or, to put it another way, the companionship between the women exists in “a psychological boundary of both pain and pleasure.” This phrase appears in a brief afterword in which Berger talks about the inspirations and influences for the novella, in particular the socio-political history of African American hair in the United States. The painful history, and present, of hair as a vector for racist violence and oppression mixes with the pleasure and pride of “hair as a space for creativity and innovation.” The psychological boundary she describes is multi-faceted, containing contradictions, uncertainties, and shifts toward one direction or the other. And it is within this psychological boundary that the events of Reenu-You take place, from the use of the relaxer to the companionship and community of the women.

My favorite moments are those that take place within that community, as the women manage the joy they find in each other's company and the havoc created by the virus that has brought them together. As a result, I was disappointed when the novella pulled away in later chapters, which turn to summarizing events. The many perspectives included, however briefly, also raise questions about other perspectives not included. Most notably, the choice to include a CIA memo about the virus's links to American activities in Malaysia seems to contradict the novella's focus. Why not instead include the perspective of one of the CIA's “test subjects,” or of a Malaysian witness swept up in these events like Kat and the other women?

But these absences don't take away from what the novella does include, from corporate malfeasance and classified government experimentation, to the American obsession with all-natural products, all set within the New York City of the 1990s. Berger fits a lot into the brief space allotted by the novella form, presenting a story that's part horror, part thriller, part emotional revelation. The result is engaging and complicated, and full without being dense.

Like Loading...
© Copyright 2017 By: Sessily Watt
About Sessily Watt
Sessily Watt endeavors to embrace uncertainty and the limits of her own knowledge. She often fails, and tries to embrace that failure as well. Her writing has appeared in NonBinary Review and Bookslut. You can find her at sessilywatt.weebly.com and on Twitter as @SessilyWatt.
One comment on “Reenu-You by Michele Tracy Berger”

Watt, First, I am so glad you reviewed this novella. I recently read it and I agree that some of the greatest moments unfold within the strange multigenerational friendship pulled together by the virus and yet also noticed the pulling away from its profondity. The one thing that comes to mind to pose to you would be that throughout the novella all relationships die - this particular one has a death causing agent at its core, not the love of a mother, a best friend, or boyfriend, so maybe from the very beginning it was never intended to be profound for very long.

Berger's choice, I believe, also seems quit poignant in choosing the CIA and highlights what voices of power transmit or don't transmit to the public. Reliable witnesses having voices of power - transmitting a message from Malaysia to NY - would undermine the socio-political aspect of the novella. The researcher writes letters to the company before she dies that we as readers can see but contain information kept hidden from the public. Plus there is always the matter that as you point out that test subjects with undesirable side effects were "terminated" - a pointed remark drawing readers' attention to how government deals with people with health issues or dealt with them in the 90s.