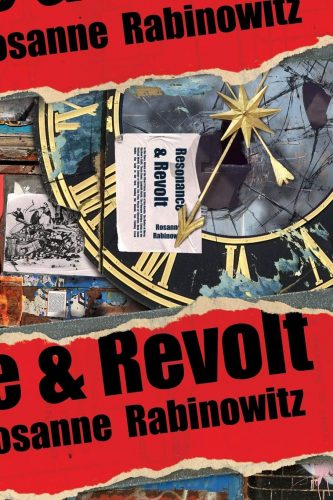 Resonance & Revolt (2019) interrogates sociopolitical injustice, but with a twist. Populated by precarious workers, medieval protestors and marginalised communities; their struggles, although separated through distance, time, or dimension, become united through the intervention of a resonant strangeness. Commenting on these incongruous intercessions into collective struggle, Rosanne Rabinowitz defines her work as “a melancholic merging of social realism and the strange” (p. 374). Rabinowitz’s characters travel through shared frequencies, colliding timelines and multiple entanglements, to forge new alliances. As such, Rabinowitz’s rendition of the strange creates protean realities over which the Fantastic slips and slides.

The stories of Resonance & Revolt have been culled from a number of anthologies such as Jews Vs Aliens (2015) and Journey’s into Darkness (2014). Rabinowitz’s novella Helen’s Story was nominated in 2015 for the Shirley Jackson Award, for achievement in “literature of the dark Fantastic.” Since the 1990’s Rabinowitz has been involved in grassroots activism through radical feminist zines such as Feminaxe and Bad Attitude. Rabinowitz is based in South East London, a location which, from the 1381 Peasants’ Revolt to 1977’s “Battle of Lewisham” (where local counter-demonstrators prevented the far-right National Front from marching), has a rich history of revolt and features heavily in her stories.

As we will see, Rabinowitz’s use of resonance inevitably leads to various layers of personal, interpersonal and societal revolt. Her characters’ experience of resonance, between peoples, histories and places, necessitates other ways of being. I will call this process of resonance which catalyses new action, “resonacting.” Resonaction refracts throughout the collection, propagating further revolt through new and extended frequencies. This never-completed process manifests what could be the collection’s mantra: “unfulfilled desires transmit themselves across the years in unfathomable ways” (p. 59).

The yearning for collective liberation takes material form in a number of ways across the collection, exhibiting what Ernst Bloch has termed the “utopian impulse.” Bloch places music as the foremost form of utopian impulse, as it affords “ways in this world by which the inward can become outward and the outward like the inward” (Spirit of Utopia, p. 231). These ways of being are full of productive “revolutionary tension.” In other words, music yokes together listeners in a shared experience of resonance which can be the basis of collective action. Similarly, Rabinowitz echoes Bloch’s structure of harmonious oscillation between self and world(s), prompted by music, as demonstrated by the collection’s first story, “In the Pines.”

“In the Pines” takes the famous North American folk song, covered by musicians including Leadbelly, Dolly Parton and Nirvana, and invents an origin story. One of the collections strongest stories, the plot of “In the Pines” is structured by loss and mourning, divided and told in a succession of three continent-spanning temporal moments: 1875 Georgia, 1973 New Jersey and 2015 Cornwall.

In 19th century Georgia, an unnamed woman buries her husband’s head. She tells us his body cannot be found, the inference being that it has become completely enmeshed and indistinguishable from the train wreck he caused. The ramifications of his accident, musically chronicled as “In the Pines,” spiral outwards across time, pulling a grieving student and a radical scientist working at the intersection of art and science, into its orbit. Each of these three central characters is mourning, struck by loss and confusion. The song becomes a sonic bridge which harmonises and ropes together these broken hearts into a shared resonance, turning mourning into a generative force for community making. This shared musico-mourning resonance transports each character into a mutual moment in time, in the interdimensional space of the pines. These resonances of place and desire across time are also the central vibration of “Return of the Pikart Posse.”

In “Return of the Pikart Posse,” Medievalist academic Evelyn has come to the Czech Republic, to research a little known band of fifteenth-century rebels. These rebels, refusing the Eucharist, instead positioned sensual pleasure as a means of embodied spiritual worship. For these countercultural actions, they were condemned as heretics and burned at the stake, to become forgotten outcasts of history. In order to resurrect this mostly effaced community, known as Pikarts, Evelyn deploys the experimental methodology of psychogeography.

Originally formulated in 1955 by theorist Guy Debord, psychogeography denoted the “specific effects of the geographical environment, consciously organised or not, on the emotions and behaviour of individuals” (“Introduction to a Critique of Urban Geography”). Central to psychogeography is the “derive,” or wandering, as a means of breaking out of habituated and/or mandated ways of occupying space.

Similarly, Evelyn attunes herself to the resonances of the Czech landscape, enabling her body to become a channel, or a transtemporal site. Wandering, she implores a long-dead Pikart rebel named Maria: “I’m listening. Tell me as I walk through the streets of the town you helped build, the town that turned against you. Put your long forgotten words in my mouth” (p. 65). Close to unearthing the obscured stratigraphies she seeks, Evelyn states that “I get so convinced that what we call time, and history, exists in layers all around us” (p. 71).

Evelyn’s eventual sensual encounters with Maria’s psychic residues enable the reconstitution of obscured counter-histories of resistance. Her embodied excavations act as a means of historic redress, locating forerunners for contemporaneous protestors to draw strength from and enabling new alliances across time. “Return of the Pikart Posse” thus questions how we encounter and resuscitate the past, insisting upon our ethical responsibility to recapture invisibilised moments of revolt.

The psychic pull of place is taken one Fantastic step further in “The Pleasure Gardens.” Daniel catches a chance glance of a former sexual partner through the window during his train commute. This jolt of recognition leads him to reminisce about, and then long for, “The Pleasure Garden,” a long-ago demolished gay bar, and the communal acceptance he found there. “Daniel remembers the back room at the Pleasure Garden. A grotty club with crap music transformed into its antithesis: a place lit by embers of touch and truth” (p. 177). Whilst in the foundations of this former club, now a construction site, Daniel encounters an anthropomorphic personification of the area. This composite entity declares, “I’m the mind of the old market, and much more. The distilled desires of dumpster drivers and bondage queens meet within me” (p. 184). As both a phantom of memories and a creaturely memorial, the entity is composed of the area’s prior, and future, centuries. This personification signals the continued viability of local cultural heritage as a basis of resistance, as an aura which cannot be completely tamed, utilised or domesticated by the forces of capital.

As with Evelyn, Daniel’s encounter with an amalgam of different times takes the form of an eroticised experience. Succumbing to desire, Daniel and the personification have sex. Ivy grows from the site of this encounter, promising to “crack the foundations … in time” (p. 186). Thus within the roots of rapacious gentrification, emblematized by the construction of yet more luxury flats, gestates a hope for a future where the ubiquity of capital can falter and fall.

Further down the track we first joined with “In the Pines,” closing the collection is the interdimensional train of “The Turning Track,” co-written with Mat Joiner. Uniting the layers charted throughout the collection, these tracks run dreamily, “like threads or veins of ore through the layers of the cosmos” (p. 352), to neatly tie together many of Rabinowitz’s main themes. As a toll for travel, the train necessitates that its passengers shed their old skin, enforcing a transition through mourning and desire, into another state of being. While deciding whether to remain with the train or leave, one passenger seems also to encapsulate what I believe to be the overriding ambition of this collection: the speculative generation of solidarity through mutual responsibility.

“Somebody's got to stay and bear witness. How many people have seen or heard the Train and think they’re mad? … if I finish the book, then they're not alone anymore.” (p. 357)

I have only pulled at a few of the strings of the collection—there are Jewish protesters forging alliances with aliens, encounters with a mythological female Pan, and further forays into the borderlands of neoliberalism to yet discover.

Prioritising and valorising the narratives of the marginalised, these stories investigate how the cross-hatching of former resistance with current struggle, can form potent ballasts for future change. Mobilising the strange, the collection insists upon the metastable, changeable nature of reality, speaking of the inherent mutability of seemingly incontrovertible systems of governance. It may be no surprise then, especially considering its title, to hear that Resonance & Revolt very much wears its politics on its sleeve: it is a collection fuelled by anger and galvanised by solidarity. One criticism is that the dialogue, especially in the older stories, can sometimes seem a little artificial. However, Rabinowitz is to be applauded for using the tools offered by speculative fiction to depict and challenge the violences that exploitative neoliberal practices enact on their subjects. Rather than surrender to the seeming insurmountability of capital, these are stories which strive to put hope into praxis.

Like Loading...
© Copyright 2019 By: Rachel Hill
About Rachel Hill
Rachel Hill has previously written reviews for Foundation, Shoreline of Infinity and Femspec. Originally from North East England, she now lives in London. Interests include science fiction (the weirder the better), science and technology studies, and cross-stitch.
No comments yet. Be the first!