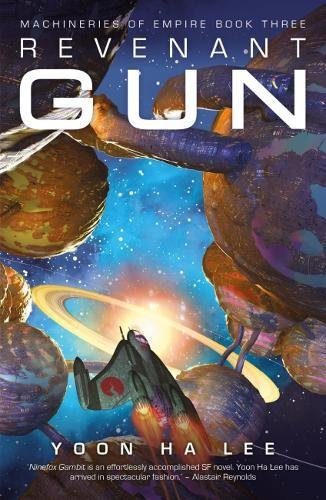 I don't write a lot of reviews, so I'm going to get the essential part out of the way before I inevitably forget. To wit: Revenant Gun is a great book. I liked it a whole lot. (I immediately added it to my “favorites” shelf on Goodreads, a tier occupied by only twenty-four titles, two of which are the previous two books in this trilogy.) Yoon Ha Lee stuck the landing, and in doing so cemented that the Machineries of Empire series is one of the most ambitious and rewarding science fiction series in print.

The front matter for the print edition of Revenant Gun includes a quote from Phoebe Salzman-Cohen’s Strange Horizons review of Ninefox Gambit, the inclusion of which cracked me up on several levels. The quote they pull is this:

“You know what's going on, right?” Ninefox Gambit asks. Often, you have to say, “Uh, yeah, of course,” when the real answer is “I have no idea, but I really, really care.” And then you keep reading.

My everlasting thanks to Salzman-Cohen for this wholly accurate description of the reading experience. My father, an American, was a Peace Corps volunteer in South Korea in the '60s. He's described to me the method of language tutoring he and his fellows received before departure. Rote repetition by sound alone, over and over, the feel of the thing before the thing itself, syllable by syllable, getting to know how words should sound before they knew what they meant. Calendrical warfare, calendrical rot, banner the Deuce of Gears, and deploy the threshold winnowers. By the time you arrive at Revenant Gun, you're fluent, and what you're left with is really, really, really caring.

There's no shortage of characters to really care about in this third installment. The novel moves between three points of view to give us the scope of events. There's Kel Brezan, now High General Brezan, who finds himself a reluctant head of state following the coup that Cheris pulled off in Raven Stratagem. Through Brezan we also spend some welcome time with Hexarch Shuos Mikodez, with crucial cameos by his assistant's cats. Brezan and Mikodez find themselves variably at odds and in alliance with General Kel Inesser, a character mentioned, but offscreen, in the previous two books. She's intimidating, brilliant, petty, but strategic about it, and exudes an air of being too old for all of this. I found her a welcome addition.

We get a new point of view character in Hemiola, a snakeform servitor that served for centuries on hexarch Nirai Kujen's secret evil moon base. Hemiola usually leads a peaceful life, tending to Kujen on his once-a-decade visits, and otherwise watching Andan serial dramas and making fanvids. Sadly, it then becomes accidentally involved with Ajewen Cheris, who is dabbling in that classic Jedao hobby: assassination. Hemiola has lived an isolated life up to this point; it is one of only three servitors on Kujen's secret evil moon base. When it takes up with Cheris, we're treated to a closer look at servitor society and some of its individual personalities. Unfortunately, we don't learn as much about Kujen's secret evil moon base as I'd have liked, other than that it seems to be made up of opulent bedrooms and scientific necromancy labs in a sort of open-plan office arrangement. It's also secret, and on a moon.

And then there's Jedao. A Jedao whose most recent memories are of being a first-year cadet at Shuos academy, but who wakes in a body that seems much older. He's ordered by Nirai Kujen to take command of a swarm of warmoths to defend what remains of the hexarchate. Jedao, clever, brash, trapped, and lonely, fumbles his way to the truth about who he is, what he's done, and what's left that he can do.

If you'll suffer me one medium-sized spoiler, it's this: the titular Revenant is a warmoth, and through it we learn that all moths are sentient beings. All of them living, thinking, alien creatures now domesticated and bred for the harness, all forced to make war on other moths. As trapped as any Kel beholden to their formation instinct, or every person living in fear of being declared heretic. The brutal, byzantine calendrical system that runs on ritualized slaughter, that paradigm we readers worked to learn, in each book of the trilogy it's a trap laid for the people within it. With compassionate characterization, Lee gives us the servitors and the moths, and makes them people too. The machineries of an empire are violences large and small, are war. Lee relentlessly reminds us that war is a self-sustaining state, and that the suffering it produces is its intended product. Every person suffers for an empire's wars, even the people it deems only tools.

Of the questions SF keeps returning to, “who gets to be a person?” is one of my favorites. In a perfect world, of course, the answer is: everyone. But there are no perfect worlds, in space opera or on Earth, and so the question remains pertinent. I've put a lot of time, energy, and love into consuming fiction that doesn't include people like me in its notions of personhood, whether that exclusion takes place through dehumanization, vilification, or simple and total erasure. The inscrutable Oriental horde, the self-mutilated and deceitful transsexual, the abomination, the half-breed, the perverse and depraved homosexual. And certainly never, in one character, all of these things at once, so that when I see myself reflected in fiction, it's in these fragments of identity, divorced and distorted. For the most part, though, I've never seen myself in fiction at all. I became fluent in the language of Western identification, straight and cis identification, and I hated some of those stories, and I loved many of them. Filipina writer Cristina Pantoja Hidalgo, writing about her early love of Little Women, calls it “a gentle colonization.”

There are stories that try to speak about empire without speaking about irrevocable loss, and some of those may be entertaining reads, but they weren't written for anyone whose homes and minds have been colonized, or for those whose people have been sacrificed as pawns in someone else's grand game. It's not only the undeniable Asian-ness of these books that pierces me through, and it's not only that the vast majority of Lee's characters are queer. It's that his two most central characters, Cheris and Jedao, come from the Mwennin and Shparoi, ethnic minorities within the hexarchate, and they both in their ways try to honor and remember their home cultures from within the homogenizing force of the empire. It's that Kel Brezan did the math on joining the Kel versus being able to go through medical transition, and he made his choice, but that doesn't mean he can't still get angry about it. It's that Cheris's Mwennin were all but exterminated, the Shparoi were lost to Jedao forever, and the two of them had to live with that loss, always aware of it. That the Kel are passionate about their kimchi, that a pair of ducks signify a marriage, that Jedao falls a little bit in love with any man who shows him kindness. It's that these things happen, or are mentioned, but don't have to be explained because the book expected someone like me to be part of its audience. High General Kel Brezan thinking “Ugh, chest binders, am I right?” and me, in reply, “good God, don't even get me started.”

So, yes, I loved Revenant Gun. I've treasured this trilogy, and am impressed at the ending Yoon Ha Lee accomplished. I am also very greedy, and glad to report that Lee has confirmed he's in the middle of writing a collection of short stories within the Machineries of Empire universe, one of which is set directly after Revenant Gun. Until then, I'll be

Yours in calendrical heresy,

Like Loading...
© Copyright 2018 By: Nicasio Andres Reed
About Nicasio Andres Reed
Nicasio Andrés Reed is a Filipino-American writer and poet whose work has appeared in Queers Destroy Science Fiction, Strange Horizons, Shimmer, Liminality, Inkscrawl, and Beyond: The Queer Sci-Fi and Fantasy Comics Anthology. A member of the Queer Asian SF/F/H Illuminati, Nico currently resides in Madison, WI. Find him on Twitter @NicasioSilang.
No comments yet. Be the first!