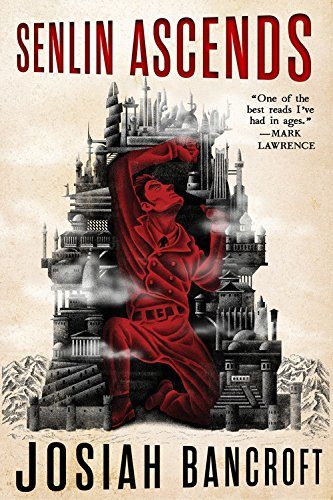 Senlin Ascends isn’t terrible. It’s not hard to see why it succeeded as a self-published novel and then got picked up by Orbit. Josiah Bancroft’s protagonist, the eponymous Senlin, gets to go do stuff and see cool things, some of which genuinely have a sense of wonder or at least amusement to them; the book alternates between action and introspection while bumping into a whole series of characters and set pieces that appear just long enough to show off their best elements and then fade quickly before anything can puncture them. Through it all, Senlin gets to become a more decisive protagonist (often signified in the latter sections of the book with physical violence of a not-too-gratuitous level), maintain a basic goodness in a wild world, while the reader continues to discover new things about the Tower that click into place in satisfying ways.

“The Tower of Babel is the greatest marvel in the world. Immense as a mountain, the ancient Tower holds unnumbered ringdoms, warring and peaceful, stacked one on the other like the layers of a cake. It is a world of geniuses and tyrants, of luxury and menace, of unusual animals and mysterious machines.

“Soon after arriving for his honeymoon at the Tower, the mild-mannered headmaster of a small village school, Thomas Senlin, gets separated from his wife, Marya, in the overwhelming swarm of tourists, residents, and miscreants.”

To be more specific, a thirty-something schoolteacher brings his young wife on a honeymoon and loses her in the crowds because he’s embarrassed to accompany her when she goes shopping for a negligee to spice up their evenings. Some readers will giggle at the absurdity of such dire consequences for such trivial discomfort. Others will react to the fact that a woman’s sexuality is the root cause of the conflict in Josiah Bancroft’s Senlin Ascends and that the woman is immediately removed from the narrative. Both will have a pretty good idea of their reaction to the book. Senlin Ascends begins as it means to go on.

At one point in this novel a woman is literally maimed so that Senlin can learn that he’s a coward. Or rather that the habit of avoiding physical confrontations, which was a fine and appropriate habit of behavior in his life as a schoolmaster in a quiet fishing village, has real consequences here in the tower. Those consequences, of course, don’t fall on Senlin. They fall on the women around him. We are told in the book that “anything in a skirt floats” (p. 52). What we are shown is a woman maimed so that Senlin can learn a lesson, women under threat of sexual coercion or violence, and women idolized. Literally:

“she was becoming a an abstraction, an image, an ideal … The woman was disappearing. The memory of her thrilling voice, the taper of her agile fingers, and the subtle flirtations she used to console him in a crowded room … All of it was fading away, and in its place, growing larger and more real every day, was Ogier’s painted icon. So, he had hidden her from himself in the hope that when he did glimpse her picture again, it would give him a little shock of memory” (p. 328)

Senlin himself rarely faces consequences. After fighting to a standstill a trained assassin with a magic arm, he decides to learn to fight. The woman who trains him is later defeated by this assassin, rescued at the last minute by her former student. If something about the chronology in those events seems a little off, try not to think about it.

Senlin Ascends is full of spectacles—from that trained assassin who is introduced during a public execution to the “beer-me-go-round,” an elaborate machine that gets men to ride bicycles around a giant spring, ratcheting it back into place before some of the energy is used to send out a fountain of beer for the willing laborers. Senlin lurches from one to the next like a ping-pong ball, pausing just long enough to meet someone who can teach him a lesson or two about the mystery of the tower, and about how he needs to change his behavior to adapt to the chaos and caprice of the structure of power around him.

In many ways, this is a very familiar story despite the trappings of vast machinery, airships, and rail networks: naive young men have been following guides through exotic locales in pursuit of women kept carefully at a distance since at least Dante’s Inferno. The point is spectacle, and also for the naive observer to reflect back our own world through a funhouse mirror so we may see deeper truths. So … what, here, is the Tower of Babel?

It’s tempting to see Bancroft’s Tower as an allegory for our own world. As Senlin explores, he sees that the Tower is a construct literally built on the exploitation of the masses, with the various lower rings providing necessary service to those above. There is rampant inequality, laws applied arbitrarily and violently, and money is the ultimate source of safety. For all of these surface parallels, however, Senlin Ascends is not particularly interested in interrogating the world it reveals. At various times we learn how much money Senlin, or one of his companions has, or doesn’t have, but these moments come at points of narrative convenience, not from some underlying logic of the world itself. Similarly, Senlin is changed by his time in the tower, becoming more ruthless and willing to consider physical violence while maintaining a veneer of “goodness,” but it’s never clear that the logic of his experiences is driving these changes, rather than the whim of the author.

The thing is, middle school me, who survived bus rides by imagining myself a farspeaker-redactor in the world of the Pliocene Exile, or learning the Will and the Word from Belgarath and Polgara, would be pleased that adult me still has access to books and worlds in which I can easily imagine myself. Adult me wants to tell middle school me that this too shall pass, and that there’s more to stories than imagining oneself inside them (also that girls aren’t scary, and I should try talking to them rather than imagining that they’re like the characters I’ve been reading about in Dragonlance). With Senlin Ascends, though, I find myself groping for any significance beyond the spectacle.

Early in the story, Senlin reflects that:

He especially delighted in the old tales, the epics in which heroes set out on some impossible and noble errand, confronting the dangers in their path with fatalistic bravery … Their deaths were boastful and lyrical and always, always more romantic than real. Death was not an end. It was an ellipsis.

It’s a meta-comment: a reflection on the fantasy genre, casting Senlin Ascends solidly on the side of the authors putting in a little grit and seedy underside against, well:

“And why, sir, I never thought of that before! We’ve got—you’ve got some of the light of [the old tale] in that star-glass that the Lady gave you! Why, to think of it, we’re in the same tale still! It’s going on. Don’t the great tales never end?

To be very clear, this book is not Grimdark; Senlin gets his rose-colored glasses knocked askew, not dragged through the mud. Senlin Ascends is trying to reflect on the fantasy genre, but while it succeeds at taking the fashionable potshot at pastoral fantasies, there’s no more to it. Grimdark makes this critique as part of a larger project of embodying Hobbes’s idea that life is nasty, brutish, and short, and that people act to protect themselves in the face of this reality. It may not be an interesting or accurate view of the world, but it is at least a coherent ideology. Senlin Ascends is trying to rub some of the romance off death and adventure without tipping so far, but Sam himself has already come to Senlin’s realization: “It was Sam’s first view of a battle of Men against Men, and he did not like it much … He wondered what the man’s name was and where he came from; and if he was really evil of heart, or what lies or threats had led him on the long march from his home” (The Two Towers, p. 268). There’s a critique to be made of fantasy in the vein of Tolkien, but Senlin’s realization that death is not always romantic is neither interesting nor original.

This trend continues throughout the book. At one point, Senlin is passionately arguing about the tension between justice and mercy with one of his captors:

“Have you been entirely stripped of your conscience?” he asked. “Don’t hide behind duty and institution. Act like a human being! Don’t behave as if this brutality is defensible just because an arbitrary policy and a bullying bureaucrat stand behind it.”

The tension between justice and mercy is a fascinating and difficult struggle, embodied in various social movements throughout our history, and still playing out in the present. It’s fascinating and difficult, however, only with stakes. When one half of the argument is acting and the other half is arguing on behalf of someone else, it has all the relevance of a debate about how many of those angels can dance on the head of that pin. The silent observer to this particular argument is, of course, the woman who will actually be harmed depending on the outcome.

Senlin Ascends is a perfectly fine adventure if you’d prefer zeppelins and railways to horses and wizards and would like to avoid rape and gratuitous violence. At a sentence level, the language is often well-constructed, with delicious images: “A slow rain of condensation splattered his shoulders, the slate pavers, and the clay tiles of cottage roofs. Thousands of snails, some as large as cows, clung to the waterworks above, their shells the color of dark, unpolished jade” (p. 39). But there’s a carelessness throughout the book whenever it tries to move beyond spectacle. The levels of the tower that Senlin encounters are full of Significant Details: an entire level devoted to performing (and witnessing) plays in which even justice is an act, for instance, but the execution inevitably falls flat. The musings on duty, honor, love and heroism in the book are never more than academic. Similarly, rather than experiencing the consequences of whatever space he’s encountered, Senlin always watches them happen to someone else: generally a woman.