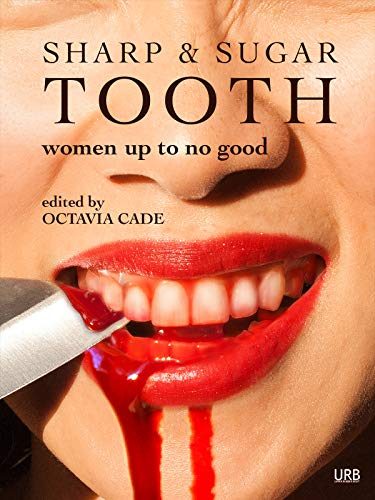 Sharp and Sugar Tooth: Women Up To No Good is hardly editor Octavia Cade’s first foray into the lip-smacking realms of fantastical and science fictional food—Cade previously wrote a column on “Food and Horror” at the Book Smugglers, later collected into a book of essays. It’s hardly surprising, therefore, that Sharp and Sugar Tooth begins with the most penetrating introduction I’ve ever read in an anthology, verging on academic in the thoroughness of its analysis; something you’d expect to read in a journal on Jstor, perhaps, or hear presented at a conference.

But Cade’s introduction isn’t just long and fascinating; it’s also absolutely vital to understanding the queer, visceral, many-hued anthology that follows it. The intersections of food, femininity, and speculative fiction form a tangled, complex territory. Too vast and too complex to do justice in a single anthology, you might think, let alone ten—but Sharp and Sugar Tooth does just that, its constituent stories selected with the same care a professional chef gives to balancing flavors in a dish. And the introduction is equal parts map, lamp, and signpost, helping readers navigate this tapestried land. Cade takes the time to contextualize each story in turn, connecting them to the central theme and thereby opening them up all the more richly to a reader’s understanding. I read the introduction more than once, and I strongly recommend going back to reread it after finishing the book.

Sharp and Sugar Tooth kicks off right on theme, with a story about a woman literally being devoured by her ex—“Candy Girl” by Chikodili Emelumadu, which I’d read before and was very happy to see reprinted here. Darkly comical with a delicious twist at the end, “Candy Girl” is about what happens when a white man is so intent on consuming a woman of color’s culture that he treats her like an object to be devoured. Literally. He accidentally substitutes the Igbo word for “it” in place of “her” in a spell to make her love him … and turns her into candy, the thing he loves the most.

The themes introduced in this first story are ones that the rest of the collection goes on to develop: the way in which the world treats women, particularly women of color, as consumable; the way women are shamed for their appetites, while simultaneously being burdened with the responsibilities of feeding others; the way an imbalance of power—whether in terms of race or gender—can turn a relationship into a devouring thing, rather than a nourishing one.

The racialized weight and meaning of food come up again in Alyssa Wong’s Nebula- and World Fantasy Award-winning “Hungry Daughters of Starving Mothers,” a taut, ravenous tale of an Asian-American woman’s fight to control her monstrous appetite—and keep it from turning on her innocent loved ones. Jen may be a psychic vampire who devours human soul-stuff, but you get the sense that what really makes her monstrous is that she’s a woman of color who dares to be greedy rather than meek. To demand more. To be dissatisfied. Meanwhile, in “Bristling Skim” by D.A. Xiaolin Spires, an Asian-American transracial adoptee hungers for the heritage she barely knows, and finds a haunting, addictive taste of it in a tin of milk powder left over from post-World War Two Japan.

There’s a reason we use “hunger” as a synonym for yearning: loving someone who doesn’t love you back can make you feel as hollow as an empty belly. Both Katharine E.K. Duckett’s “Gimme Sugar” and Kathryn McMahon’s “The Honey Witch” are about unrequited love turned tragedy, and what people will do to fill that void (and their stomachs, in lieu of their hearts). On the flip side, we have “Dear Son” (by Joyce Chng) and “A Year Without The Taste of Meat” (by Erin Horáková), both of which center on what happens when the idea of giving of yourself to your loved ones is taken … a little too literally.

I’m speaking of cannibalism, of course. What makes both of these quiet, gentle stories remarkable is that the cannibalism therein isn’t presented as monstrous, or horrifying. If food is love, and love is nourishing, then what better way to demonstrate your love than to let your corpse nourish the loved ones you leave behind, rather than go wastefully into the ground?

“Red, From the Heartwood” also features consensual cannibalism as an act of love, if of a different, mythological variety. What happens when a dryad lets their human lover eat the apples plucked from their tree form? Nothing good, it turns out. This story might just be the one that hit me hardest where it hurts. Penny Stirling crafts a tale shot through with achingly palpable feelings of love and longing that are transmuted into keenest hurt when they lead good people, with good intentions, into tragedy precisely because they loved, and longed.

Cannibalism, then, perhaps unsurprisingly crops up a lot in Sharp and Sugar Tooth. Remarkably, though, each instalment brings something fresh to the table, keeping them independently fascinating and ensuring the theme does not grow stale. Crystal Lynn Hilbert’s “Soul of Soup Bones” is another tale of feasting on human remains with their erstwhile owner’s consent, though the thing being consumed along with nourishment here isn’t love, but scholarly knowledge. It’s a story that will speak to anyone who has poured their life into research of any kind— the struggle to learn as much as you can before your years run out, the fear that your knowledge will die with you, the desire to leave a legacy behind.

Though the anthology skews quite heavily toward fantasy as a whole, two post-apocalyptic stories occur back to back. “I Eat” (H. Pueyo) and “Who Watches” (Rem Wigmore) both feature the bleaker kinds of cannibalism we’re more used to encountering—cannibalism as an alternative to starvation in the wake of the collapse of civilization, cannibalism propelled by desperate lizard-brain instincts to survive. Apart from that, though, the two stories couldn’t be more different. “I Eat” is skinned raw and painful, asking probing questions about our relationship to the rest of the living world, and the difference between sustainable consumption and consumption that sucks that world dry. “Who Watches” is quiet and contemplative by contrast, shockingly domestic, even, given its setting. It makes the point that the difference between thriving and simply surviving is finding what pleasure where you can—even if that means feeding on zombie flesh.

As Cade points out in her introduction, “we eat or we die.” To be human is to hunger—it is a fundamental need we all share, a great equalizer. But while the threat of starvation can render us down to a primal, naked kind of desperation, food can also conversely be a weapon and a means of power.

Sometimes, this is the power to hurt. They say poison is a woman’s weapon, and it certainly is in Catherynne M. Valente’s “The Lily and the Horn” and Kathleen Alcalá’s “The Doll’s Eye”—both stories about women who are skilled in the arts of administering and identifying toxins, and who practice those skills in the employ of royalty. Other times, as in Sabrina Vourvoulias’s “A Fish Tale” or A. R. Henle’s “Strong Meat,” food become a power to heal past trauma and forge strong, healthy connections with other people.

The anthology ends with the only story in it that might be called “hard” SF, Betsy Aoki’s anthology closer, “And When We Die, They Will Consume Us.” In it, scientists trapped on a wrecked space shuttle deal with an alien virus that is taking over their bodies, struggling to feed themselves on yeast vats and fungi cultured in airlocks. While this skew toward fantasy and away from science fiction does make the anthology feel a tad unbalanced, it feels very fitting for it to end with Aoki’s story, which pushes past planet Earth to look at what happens when the human race encounters an alien force far more ravenous than us. The viral invaders in the story colonize human bodies on a microbial scale, hijacking the processes of “bacteria and assorted microflora” that keep us ticking. As Cade puts it, “Each of us is a community eating.” Aoki reminds us that for all that we consider ourselves apex predators, we are ultimately small cogs in a vast biological—and even cosmic—ecosystem: one that eats, converts, rebirths, and repeats.

There are other stories I haven’t mentioned, but they are very few in number, as the vast majority of the anthology is vibrant, searing work. Like a twenty-course feast, Sharp and Sugar Tooth is meant to be savored, not speed-read. The stories are heavy and ripe, demanding you take the time to digest them, or risk biting off more than you can swallow. Many of them lean into the decadent prose that writing about food allows, and apart from a few instances of levity, most skew dark. This isn’t an easy book, or one you can read in a single sitting.

It is a richly-textured tapestry of infinite variation and detail, and it is sure to provide you—pardon the pun—with plenty to chew over.

Like Loading...
© Copyright 2019 By: Nibedita Sen
About Nibedita Sen
Nibedita Sen is a queer Bengali writer, editor, and gamer from Calcutta. She is a graduate of Clarion West 2015, and her work has appeared or is forthcoming in PodCastle, Nightmare, Fireside, and The Dark. She helps edit GlitterShip, an LGBTQ SFF podcast, enjoys the company of puns and potatoes, and is nearly always hungry. Hit her up on Twitter at @her_nibsen.
No comments yet. Be the first!