Reviews
Size / / /
Something Like The End by Ashley Morrow Hermsmeier
By: Nicole E. Beck 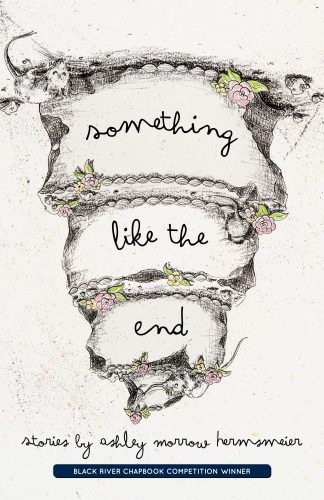 Black Lawrence Press publishes contemporary fiction and poetry. Something Like the End was produced as the winner of their fall 2017 chapbook contest, which limits the page count to thirty-six pages. This explains the brevity of the reading experience. Based on the information from the author's website, the chapbook appears to be Hermsmeier's first; the half-dozen prose stories that make up the book were published individually in magazines and journals. This in turn perhaps explains why, tonally, the six stories vary so widely in setting and point of view.

Where the writing shines is in the quality of these varied details: the observed environments, the food that the characters consume. In some of the stories, the author uses these textures to great effect, creating a grounded sense of place. In others, however, the story simply drops the reader into an implausible situation: a dystopian background doesn’t seem necessary to make the point that a given story is making; elsewhere, I’d wonder why another couldn't be set in our own reality.

Indeed, the fantasy and science fiction elements read as an afterthought throughout the collection. The story "When the Bees Come Back," for example, consists of a conversation between a woman and a handyman. They are trying to proof her house against a swarm of deadly bees that is wiping out America. It's never explained how or why this disaster is possible, or if their method of boarding up windows is effective protection. The killer bee swarm serves only to start the clock counting down; it could just as easily have been a storm approaching.

The pressure of being on the edge of disaster causes the woman to reach out to the handyman for reassurance, though he says things like, "Would we even hear the neighbors' screams … we could be the only two people alive right now" (p. 3). Then the story ends without further action or resolution. But why bees? It's not a given that killer bees could wipe out an entire developed country. The purpose of this brief vignette is to show how isolated the woman is, and how creepy the man becomes in that situation. The bees, presented without sufficient rationale, are not narratively justified.

The strongest story, "Feeding Strays," avoids any such gimmick for a character-driven, scene-based plot. It is buried in the middle of the collection, after two end-of-the-world stories featuring earthquakes and those bees. In "Feeding Strays," Greer, a battered woman, is in a tight spot financially after her break up. The story opens with Rita and Greer sharing a roast chicken. Food and feeding quickly assumes enormous thematic significance. The food Greer consumes consists of stale, expired cast-offs from her grocery store job. Greer's best friend Rita works in the same grocery store, in management. While sharing the chicken, Rita keeps the moist dark meat for herself and Greer gives away the rubbery white meat to a stray cat. This neatly sets up their friendship and gives a little foreshadowing. Rita can take care of herself and get what she needs; by the end of the tale, it's apparent that Greer cannot.

The specific food-related details create a believable setting and atmosphere. There is some solidity to the world that Greer and Rita inhabit. For instance, while at work in the grocery store Greer encounters "a slab of raw steak, out of the package, in the middle of the ice cream aisle" (p. 11). Her distressed reaction gives us a hint of her as a character, particularly her emotional state.

Consuming food and giving food occurs throughout the narrative. Giving food is always a sign, weighted with meaning. Depending on context, it can signify an overture of friendship, or it can be an attempt to control the other person. As an example, Greer deals with the butcher's flirtation on the job because he supplies her with expired frozen shrimp. Later, she muses on the situation for a moment: "She tried not to think about how depressed expired gift shrimp made her feel" (p. 12). But she determines that she can't afford to annoy the butcher by rejecting him, and lose the extra food. So, she pushes it out of her mind.

The main crisis in the story centers on Greer's need to pity and feed a stray animal, even to the detriment of her own situation, to the neglect of her own needs. Greer thinks feeding others gives her emotional claims on them, an assumption that is damaging to her, and one that she never seems to question. Yet she experiences frustration when the butcher applies the same logic towards her.

Acting as a good friend, Rita does question this, pushing on Greer to reflect on past toxic relationships. Greer's response is that her abusive ex boyfriend Jeff was "someone to cook for" (p. 10)—to which Rita retorts that Greer needs to stop feeding strays. Thus begins the identification of Jeff with a stray animal.

Though the story ends on an ambiguous note, what's not up for debate is the physical abuse Greer suffered from Jeff. And yet, while bleeding from several injuries, she expresses her belief that "he might feel bad about the whole thing, he might have been abused himself" (p. 18). Rita again challenges this attitude, saying that neither the stray cat nor Jeff feel remorse for their actions, and that Greer is failing to protect herself from further harm. But Rita's warnings to her friend go largely unexamined, since Greer prefers not to think about uncomfortable things.

It's worth noting that the only touch of fantasy about this scenario occurs with the fate of Jeff, who is transformed (maybe) in a rather obvious way. The takeaway from "Feeding Strays," is that men are essentially hungry animals. Taken one step further, men are predators, and assholes, as Rita repeatedly claims (p. 18). Here is the weakest point of the entire book: simply put, men are never developed as characters. They are reduced to caricatures and archetypes, as the beast in "A Fairytale Ending," or they are "bastards" who have the potential to destroy a woman's life (pp. 27-28). There is no true counterpoint to this message. All six stories in the collection orbit the same tired gender stereotypes.

What these stories never allow for is the idea of men as human beings. It appears the point of men in these stories is to generate conflict. They certainly don't gain dimension or attain any psychological realism. A repeated motif is that men happen to women. Women don't act, they react to decisions men have already made. Instead of shaping the world themselves, they work to redeem hungry, bestial men, and often end up hurt. Rita points this out when she challenges Greer by asking, "When was the last time you went more than a week without a man around?"(p. 10). And Greer has no answer for her, because she's always had a man around.

Another instance of this fatal oversimplification occurs in "Every Version of Me." The first-person narrator, a widowed woman with no name, contrasts her first husband to her second husband. She refers to the second man as her "Good Stan … Saint Stan" (p. 23). The first husband represents the Bad Man; he was a musician, a user of cocaine, an otherwise generic outline of a sinner in contrast to Stan's saint (p. 22).

Of course, male writers throughout history have stereotyped women, either elevating them on a pedestal or lumping them in with forces of evil. But it is jarring to encounter the reverse scenario. There certainly have been cases when an author has flipped the script to illustrate a point, but nowhere in these stories could I detect a hint that this reversal was intentional. The lack of self-reflection in these characters further contributes to the feeling that nothing new is observed here, no new points brought to the conversation. The collection does to men what I hate seeing done to women; it reduces them, flattening them into cut-outs. And, considering the book raises a heavy theme of intimate partner violence, I was expecting more by way of insight, or at least a sharper critique of the “battle of the sexes” status quo.

Where "Every Version of Me" succeeds is in the attention to detail. Similar to the strong points of "Feeding Strays," the environment helps to sustain the magical element of walking corpses. Rising from their graves, the undead are depicted with "clumps of dirt falling from mud-matted hair" (p. 23), setting up an image of dirt trails and rugs that never stay clean. The widow laments: "I sigh at the muddy footprints. The dirt is never-ending" (p. 24). These footprints also serve as a visual reminder of the “dirt” from her past, which she attempts to keep buried. Somehow it always seems to find her anyway.

The widow's story is a loop. She performs the same actions in a cycle that doesn't end. Perhaps there is a parallel with Greer's situation, in which a hurting woman knows she must protect herself and then lets in the first stray that comes along, keeping the negative cycle going. All stories do not need to have a linear plot progression. But since the widow's story ends where it began and with no discernible change, I would have liked for it to dig deeper into that lack of return. In other words, if there isn't time or space to achieve breadth in a short piece, then I would have liked to have more depth.

To speak to what went wrong with the characterization in this collection, there's a need for a more rounded portrayal of men that steps beyond caricature. The characters in Something Like the End seem unaware of themselves as part of a larger world plagued by massive societal problems. A more nuanced approach might ask better questions, might attempt to observe the mechanisms of abuse, might interrogate the culture for sources of aggression and hate. Not to excuse a person like Jeff, but to understand how he was made, and to be able to say something about him, is more revealing than a tossed-off insult.

Like Loading...
© Copyright 2019 By: Nicole E. Beck
About Nicole E. Beck
Nicole E. Beck's writing has appeared twice in print, as a long poem from dancing girl press and as a multi-genre chapbook from Red Bird Chapbooks. She studies art history with an eye towards more interdisciplinary work. Her most recent chapbook can be found here.
No comments yet. Be the first!